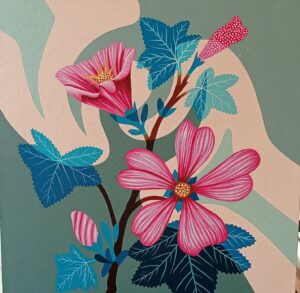 Yota Batsaki on the work of Cameroonian artist Bienvenue Fotso

Malva Neglecta (2021), courtesy of the artist and African Art Beats

Fipan Grass is the first exhibition outside Africa for Cameroonian artist Bienvenue Fotso (born 1989 in Bandjoun). Fotso is part of a new generation of painters from Cameroon, one of the countries at the forefront of the revolution in contemporary visual arts from the Continent, that claims globally famous artists like Barthélemy Toguo and Pascal Martine Tayou, as well as world-class curators such as Simon Njami, Koyo Kouoh, and Bonanventure Nkdikung. On view at African Arts Beats, in Washington, DC, the exhibition is named after a grass used in Cameroon to treat fevers, alluding to two key themes of Fotso’s practice: plants and healing.

Like several of her successful peers (Bernard Ajarb Ategwa, Jean-David Nkot, Boris Nzebo, and Marc Padeu), Fotso uses acrylic in clean and carefully composed graphic compositions of flat color surfaces in a distinct and memorable individual language. A key element of Fotso’s practice is her focus on plants. Her integration of natural motifs echoes Toguo’s, but with a different palette and formal identity that puts plants front and center. Her depiction of recognizable plants connects her to other African artists (Otobong Nkanga, Alida Rodriguez, or Kapwani Kiwanga) whose botanical investigations address history and community. They, in turn, reflect a broader botanical emergence in contemporary art, fueled by urgent environmental questions of biodiversity loss, deforestation, and climate change in the Anthropocene. (1) 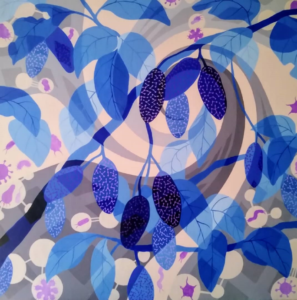 Tsem (2021), courtesy of the artist and African Art Beats

The color palette of Fotso’s canvases surprises. In Tsem (butter fruit tree in Bamileke), Fotso eschews the trademark green and brown we associate with plants and proffers instead a cocktail of blues and purple. The fruit is full of tiny molecule-like bodies, evoking the seeds but also the fundamental chemical compounds that render plants uniquely valuable. Moving from landscape to plant portrait, Fuchsia, like Tsem, features Fotso’s trademark spiral and employs a palette of blues and light pinks against which the eponymous protagonist pops out. The confluence of plant and color is a subtle reminder of the aesthetic importance of plants, as a perennial subject in art history, as the source of dyes and motifs, and even as a lens of aesthetic experience (“periwinkle,” “rose,” and “indigo” are some of the innumerable color names that allude to plants). In Fwomajyé, cool colors dominate, enlivened by silver specks and the delicate suggestion of movement. Fotso’s gold and silver hues recall again the alchemy of plants that convert the energy of the sun into sustenance for almost every other living organism on earth. 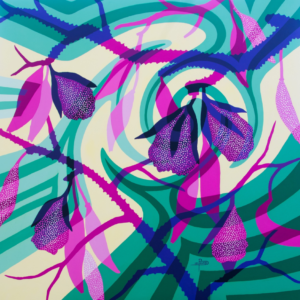 Fwomajyé (2022), courtesy of the artist and African Art Beats

Historically, flower painting has been viewed as a minor genre, traditionally associated with women who were barred from more prestigious genres such as a history painting. (2) The work of artists such as Maria Sibylla Merian or Margaret Mee attest to the importance of many women botanical artists who were prized for both their aesthetic and scientific contributions, of course. And plants in Dutch Golden Age painting, for instance, were key conveyors of class, status, and spirituality. But the painting of flora has often been considered a genteel pastime, suitable for the accomplished amateur. During the period of European imperial expansion, innumerable encounters with local floras inspired scientific illustrators and botanists but also women who had followed their families to the colonies. The botanical portraits we find in the work of Fotso signal a starkly different historical moment, where plants occupy the center of critical inquiry, and where artists negotiate these global transfers and their human and environmental legacies.

Fotso’s work is at its strongest when it draws the viewer’s attention to the individuality of plants, as in plant portraits such as Taraxacum officinale (dandelion). Although plants are powerful carriers of cultural and historical meanings, their potency is attenuated when they are reduced to transparent symbolism or anthropomorphized to elicit the viewer’s emotional engagement. In King of Herbs the coexistence of the plant and built environment recalls what Donna Haraway has called “natureculture,” the inseparability of human and non-human in the Anthropocene. At this moment, when human activity is reaching every corner of the planet, it is impossible to conceive of nature as a separate, independent entity. This interpenetration of nature and culture is frequently conveyed in Fotso’s work by the intrusion of the built environment into the forest landscape.

King of Herbs (2022), courtesy of the artist and African Art Beats

Fotso is both deeply attuned to the human dependency on plants and concerned about the loss of biodiversity and indigenous knowledge in Cameroon. These concerns and insights come together in her frequent representations of medicinal plants, such as the dandelion of Taraxacum Officinale, the moringa tree of Never Die, and the mallow of Malva Neglecta. Fotso comes from a family of healers and is intimately familiar with traditional plant-based medicine. In her community, the male head of the clan is usually the holder of knowledge about medicinal plants. While growing up, she frequently accompanied her great uncle on forest expeditions to collect bark, leaves, and roots with healing properties. These are still of immediate relevance and utility to many communities: despite the rise in synthetic medicines, a large part of the world’s population, especially in the Global South, still depends on plant-derived medicines and traditional healing practices. But the forest that provides these useful medicines is threatened. Not only are the ecosystems that supply the plants increasingly endangered through environmental degradation, deforestation, and over-exploitation; but the traditional knowledge of the healing properties of plants, developed over millennia, is at risk of being lost, stored in the memories of elders and transmitted mostly by word of mouth. By making these plants the protagonists of her canvases, Fotso calls for the viewer’s attention, respect, and care. 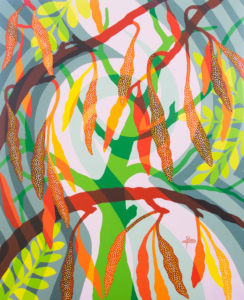 Never Die (2021), courtesy of the artist and African Art Beats

Some of Fotso’s most alluring plant portraits are of weeds—plants usually perceived as unwanted interlopers or colonizers yet valued as food or medicine in her community. Fotso’s portraits elevate them and celebrate their value while questioning corrosive ideologies of purity. From there it is easy to draw a parallel with questions of migration. Many of the plants have often been deliberately transplanted from their native environment, and some escaped cultivation to exhibit invasive behavior in landscapes disturbed by humans. Reviled for being out of place, they show incredible tenacity and capacity for survival. Fotso’s Taraxacum Officinale takes the common dandelion and transforms it into a glowing presence, in the process establishing that there is no such thing as a common plant. The dandelion was brought into North America as a valued medicinal plant by European settlers. It became part of Native American pharmacopoeia and is also used for healing in the artist’s native Cameroon. Like many plants that become weeds in new environments, the dandelion thrives on disturbed sites—the result of human activity—and can grow in the narrowest cracks of paved ground. From that disrupted and denuded environment the dandelion rises up, no longer an anthropomorphic chimera but a vibrant plant portrait in the foreground, its distinctive flower glowing and its seed pod ready to disperse the next generation of plants. 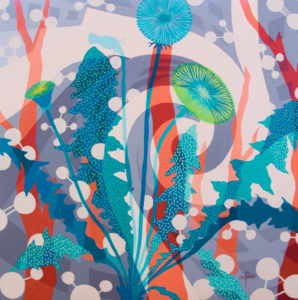 Taraxacum Officinale (2020) courtesy of the artist and African Art Beats

Fotso’s plant portraits subtly drive home the often-overlooked fact that migrations have been happening two-ways for centuries. While it is common to think of plants imported from the colonies, plants have also gone the other way. Some of the staples of today’s Africa originate, for instance, in South America. Consider cassava, a poisonous plant made available for human consumption by the indigenous experimentation and knowledge of the peoples of South America before it traveled to Africa to become a food staple for millions of people. Another native of South America, the avocado tree, appears in Fotso’s Invasion (2020). Known to the West for its culinary uses, in Fotso’s painting the avocado is commemorated for its use by traditional healers in Cameroon who prize its anti-inflammatory and anti-fungal properties. The global movements of plants illuminate local reinvention and ingenuity.

Yota Batsaki is the executive director of Dumbarton Oaks, a Harvard research institute, museum, and historic garden located in Washington, D.C. She holds a Ph.D. in comparative literature from Harvard University and was previously a lecturer and fellow at St. John’s College, Cambridge.