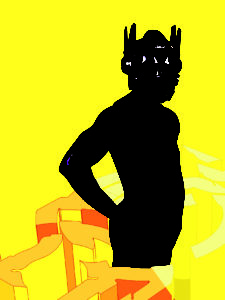 Emotion is a significant force in Landvreugd’s art. And of course, it helps if you know something of the artist’s background and if you take an interest in the public debate on colonialism and racism in the Netherlands. Landvreugd seems to want to combine knowledge and emotion. By doing so, he creates space for the possibility of insight beyond the personal and the anecdotal.

Machteld Leij on Ososma, the solo exhibition of Charl Landvreugd

Under the steep glass ceiling of the atrium of a non-descript office building on the verge of Amsterdam South East, artist Charl Landvreugd takes control. The unconventional, temporary exhibition space hosts Landvreugd’s first solo exhibition. The exhibition Ososma is organised by Centrum voor Beeldende Kunst Zuid- Oost, Amsterdam. He built a three-dimensional labyrinth, using the traditional linear drawings and woodcarvings typical of the Maroons, a people descendant from enslaved Africans who escaped the Dutch ruler into the Surinamese jungle. 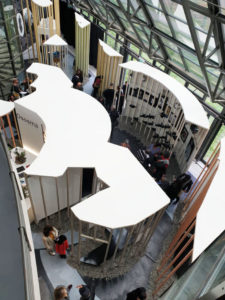 In small pavilions that form a tembe pattern when seen from above, Landvreugd shows us his life via his works of art. Starting in 2007 as an artist, this is the first time all his works – video’s, photographs and sculptures – are shown together.

Recently, Landvreugd participated in group shows in the Netherlands, with one or perhaps two works, in exhibitions that aimed to broaden the debate in the Netherlands about colonial history and the way slavery has influenced both the Dutch and Surinamese past and present. Landvreugd is a perfect candidate to participate in this debate, as he is not only a visual artist, but a scholar as well, who studies the place of black history within Dutch culture. In doing so, his own art forms an addition in itself to the cultural climate.

Landvreugd, who was born in Suriname but grew up in Rotterdam, indeed has both an activist and very personal agenda. When, for example, he photographed himself wearing a ruffled neck collar, the kind that you can find around the necks of white noblemen in seventeenth century paintings, he comments on the figure of Zwarte Piet, the black faced companion of Sinterklaas, a traditional Dutch festivity aimed at children, but which has gained international scrutiny due to its black face component. Landvreugd’s photograph, wearing a black collar instead of a white one, combined with the color of his own skin becomes a firm, yet personal comment on identity, color and racist traditions 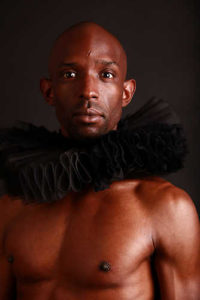 This portrait is part of Landvreugd’s exhibition, but it is somewhat tucked away in the structures that make out different and rather small pavilions, a bit cramped, but which invoke a feeling of total immersion in the world of art of Landvreugd. A mixture of grey shells and shiny sequins covers the floor. The shells stand for Suriname. The sequins stand for – could it be otherwise? – party, happiness, joy. It is a symbolic layer of hummus, underlying all the art works. All the little pavilions are named after places of importance to the artist. They have us travel through his personal and professional history as an artist. 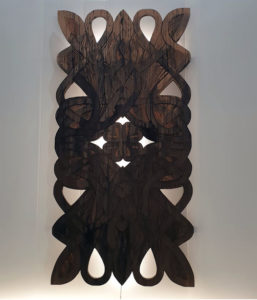 A short video clip shows youngster Charl in the eighties, vogueing at a party in Rotterdam, the town where he grew up. He organised dance parties before he became a visual artist. To celebrate this part of his life, he installed a smoke machine in the installation that can be operated by the public.
His personal background, being black and being gay, fuels his work of art. With every work he adds to his own mythology. He is basically a performer, who uses films and photographs to capture a performance so that it has an afterlife, for instance as a video. While wearing a black Transformers mask, he explores old mines in disuse, in Moengo, Suriname. Elsewhere hangs a self-portrait in mid smoke-puff, looking out from a church ruin into the jungle. This photograph made in 2015 is a tribute to his father, who had died just before. Puffs of smoke can be joyous. But they also carry the sadness of a goodbye into the wind.

Movement, place and identity provide meaning in Landvreugd’s work. Snippets of film, tunnels, places, parties, young guys having sex, all come together in the video ‘movt. Nr 8: Lobi Song’ that quotes, among others, James Baldwin on racism. The visually cloacked swearword **gg** scrolls in a regular rhythm on a little tv-screen. Racist or homophobic, but in any case bigoted, mean and aggressive. The small screen addresses toxic issues. And still, there is something highly personal in this work, something intimate as well. The closing credits confirm this: images are shot by Landvreugd himself. So we get to see what he saw. We are thus invited into his own life.

In an interview in 2012, he explained the importance of context to understanding his work. Still one wonders what the possibility of an art work is, in comparison to context, to knowledge, to facts and history? His works are meant to be undergone, sometimes they even haunt you. That is the case with the filmed portraits of black men, painted even blacker, with a hint of glitter in their body paint in the video ‘movt. Nr 2 Atlantic Transformerz’. These men wear the reappearing masks of Landvreugd’s Atlantic Transformerz figures that appear in a series of works to be understood as an afro-futuristic comment on the African diaspora. When these masks are taken off, these stern looks, these serious gazes, bordering on the aggressive, turn toward us, the public, gawping at these men. This confrontation feels slightly uncomfortable yet very powerful. This friction is an especially interesting one as it projects back to you, your own role as onlooker and the presumptions you might have. Still, these portraits uphold their own intrinsic value. 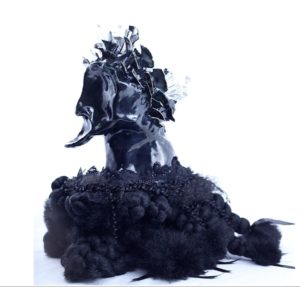 Emotion is a significant force in Landvreugd’s art. And of course, it helps if you know something of the artist’s background and if you take an interest in the public debate on colonialism and racism in the Netherlands. Landvreugd seems to want to combine knowledge and emotion. By doing so, he creates space for the possibility of insight beyond the personal and the anecdotal.
This first solo exhibition ties up all aspects of Landvreugd’s art, which is all for the better, as his work needs attention and commitment of the viewer. Now that it doesn’t have to compete with works of other artists, as it had to do in earlier group shows, appreciation grows with time and attention.

Machtel Leij is an art historian and independent writer from Leiden, The Netherlands