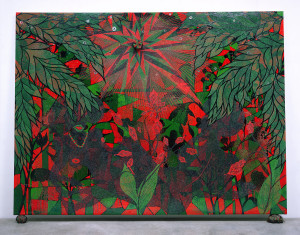 New York, NY…In October 2014, the New Museum will present the first major solo museum exhibition in the United States of artist Chris Ofili’s work. Occupying the Museum’s three main galleries, “Chris Ofili: Night and Day” will span the artist’s influential career, encompassing his paintings, drawings, and sculptures. Over the past two decades, Ofili has become identified with vibrant, meticulously executed, elaborate artworks that meld figuration, abstraction, and decoration. In his extremely diverse oeuvre, Ofili has taken imagery and inspiration from such disparate, history-spanning sources as the Bible, hip-hop music, Zimbabwean cave paintings, Blaxploitation films, and William Blake’s poems. As the title of the exhibition suggests, Ofili’s practice has undergone constant changes, moving from boldly expressive to deeply introspective across an experimental and prodigious body of work. The exhibition will feature over thirty of Ofili’s major paintings, a vast quantity of drawings, and a selection of sculptures from over the course of his twenty-year career.

The exhibition is curated by Massimiliano Gioni, Artistic Director, Gary Carrion-Murayari, Kraus Family Curator, and Margot Norton, Assistant Curator. The exhibition will be on view in the Second, Third, and Fourth Floor galleries from October 29, 2014 to February 1, 2015. 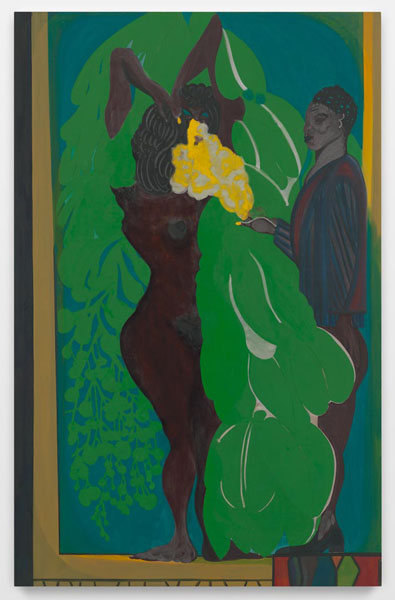 Ofili’s early paintings from the ’90s were created using his signature layering of materials, including paint, resin, glitter, and elephant dung, and a diverse combination of iconography. The exhibition will bring together more than twelve of his canvases from this period, which combine spectacularly rendered psychedelic surfaces with provocative imagery from a staggering array of cultural sources, from religious icons to Blaxploitation films. From this early period, Ofili established an approach to painting that is both seductive and rigorously historical. After moving to Trinidad from London in 2005, Ofili’s work took a new direction and prompted “The Blue Rider” series, which takes its name from the early twentieth-century artist group that sought spirituality by connecting visual art with music. Since then, Ofili has gone on to create a number of large blue paintings. For this exhibition, nine of these works will be brought together for the first time in an architectural environment designed by the artist. Composed in dark hues of blue, this series of paintings evokes the blue light of twilight and the soulfulness of blues music. Although rooted in the landscape and culture of Trinidad, Ofili’s blue paintings extend beyond to offer a contemplative approach to history, identity, and ways of seeing.

His most recent canvases have been animated by exotic characters, outlandish landscapes, and folkloric myths that resonate with references to the paintings of Henri Matisse and Paul Gauguin. This exhibition will also include a selection of paintings from Ofili’s “Metamorphoses” series. These brightly colored canvases were inspired by the poem of the same name by Ovid and illustrate the ancient Roman author’s stories of gods and humans, including the tale of the goddess Diana and the hunter Actaeon. They were initially created at the invitation of the National Gallery of London in response to their own series of paintings of Diana and Actaeon by Titian from the mid-sixteenth century. Ofili’s paintings offer a unique interpretation of both the original text and its painted interpretations, opening up the ancient myths to new, contemporary readings. These works will be displayed in a dreamlike, painted environment inspired by British filmmakers Michael Powell and Emeric Pressburger’s 1947 film Black Narcissus. 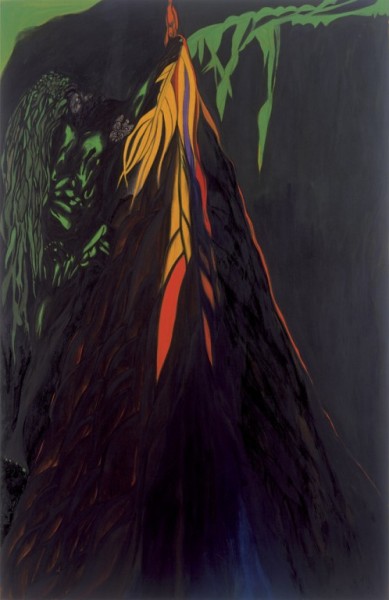 Ofili’s hybrid juxtapositions of high and low, and of the sacred and the profane, simultaneously celebrate and call into question the power of images and their ability to address fundamental questions of representation. Through a series of unexpected connections between his most important bodies of work, Ofili’s exhibition at the New Museum will reflect the vast breadth of his practice. 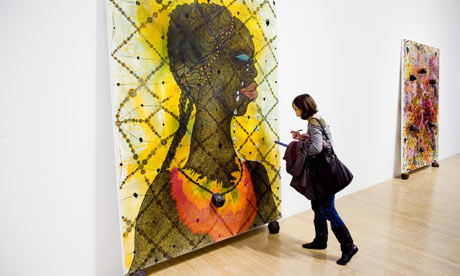 Chris Ofili was born in Manchester, England, in 1968, and currently lives and works in Port of Spain, Trinidad. He received his BFA from the Chelsea School of Art in 1991 and his MFA from the Royal College of Art in 1993. Solo exhibitions of his work have been presented internationally, including recent shows at the Arts Club of Chicago (2010); Tate Britain, London (2010 and 2005); kestnergesellschaft, Hannover (2006); and the Studio Museum in Harlem, New York (2005). He represented Britain in the 50th Venice Biennale in 2003 and won the Turner Prize in 1998. His works are held in the permanent collections of a number of museums, including the British Museum, London; the Carnegie Museum of Art, Pittsburgh; the Museum of Contemporary Art, Los Angeles; the Museum of Modern Art, New York; Tate, London; the Victoria and Albert Museum, London; and the Walker Art Center, Minneapolis.

In the November edition of www.africanah.org an essay on his work will be published.