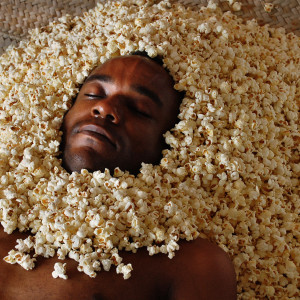 “Contemporary Art even today is still an activity for the elite in Brazil. The elite are a small group of people that descents from and still owns former plantation properties and/or the fruits of that today. Brazil is a class system, 80% poor people, the “one per centers” and a very small middle class. That with a very poor education system makes that only a few can afford to have good private education in and outside of Brazil. The descendents of the enslaved Africans are still the poor people of today in Brazil. This is even more the case if you talk about the 7% black (preto) people”.

It seemed a logical thing to do; I was traveling to Rio de Janeiro for a month so my next article for Africanah would be on black Brazilian art(ists) in Rio. Strolling around the city and meeting friends of friends however black artists where hard to find in the contemporary art scene. Everybody knew artists that were generously shared and recommended.  When I clarified I want to write about black artists most faces went blank…..

For 3 weeks I spoke with curators, artists, people working in culture and checked the programs of all museums in order to find “Artista plástico negro” in Rio. I ended up going to Museo de Arte do Rio (MAR), a new museum that has opened in 2013. The museum is located in what used to be the port of Rio. The markets for Gold, Diamonds and Human trade were established in this area in the 18th century. It is here, passed the area’s Saude and Gamboa, where Morro da Providência, the first favela developed. Less then a 15 minute walk from the museum is Pedro da Sal considered the birth place of Samba and Carnival.

MAR’s main mission as a museum is to communicate with, and about its surroundings and its history. Until February 2015 they have the exhibit “from Valonga to Favela”. 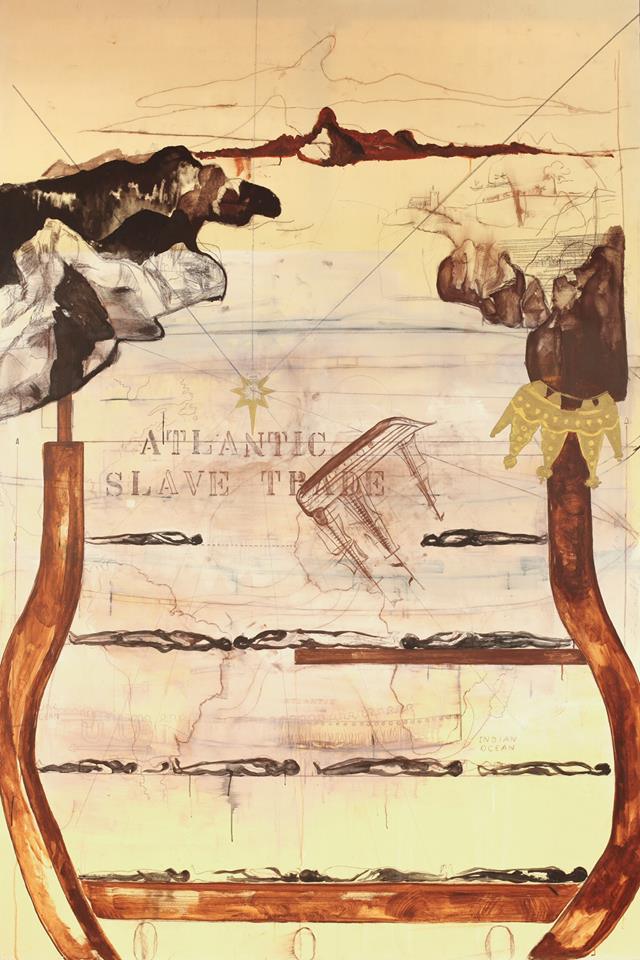 One of the artists in the exhibit is the Rio based artist Argentino Mauro Manoel aka Arjan Martins. His work is a very literal statement of the human trade that took place in the Museum Area. On the big canvas we see the form of the colonial ships with its human cargo, the mentions of the Atlantic and Indian Ocean, the drawing of a sinking ship, a deadhead with a crown and the port of Rio.

“Américas” talks about the Trans Atlantic Human Trade that took place from the 16th to the 19th Centuries. In this African Holocaust, 12 million Africans where enslaved and shipped from Africa to the America’s. Approximately 40% of the enslaved Africans ended up in the Portuguese colonies in the America’s. The port and market in Rio where the Museum is located was an important destination. Today 48% of the Brazilians checks white (branco) on their census forms, 43% brown (pardo), 7% black (preto) and 2% Asian/indigenous. Brazil has the largest community of black people/people of African descent outside Africa.

Arjan Martins ends up being the only working and living “Artista plástico negro” in Rio anybody mentioned when talking about black artists in Rio. I contact him and ask if I can come over for a studio visit. Martins has a studio in the bohemian area Santa Teresa, downtown Rio. He works on a ground floor in house in a small gated street. We talk in a big messy studio with lots of materials, canvasses, wood, and books cover the walls and floors. I ask him about the fact that he seems to be the only artist people come up with when I ask to be introduced to black artists in Rio. 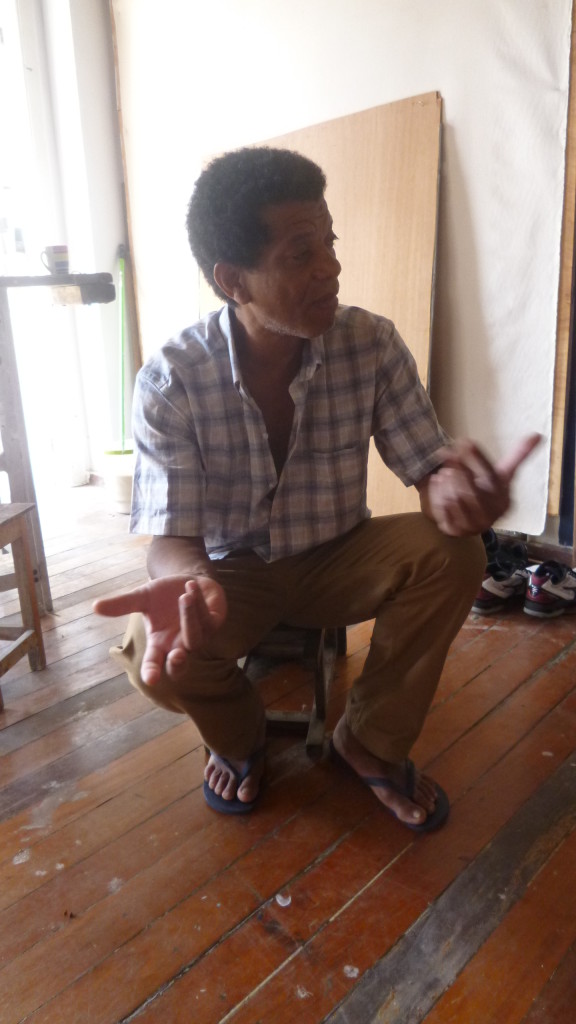 Arjan Martins in his studio in Santa Teresa

“Contemporary Art even today is still an activity for the elite in Brazil. The elite are a small group of people that descents from and still owns former plantation properties and/or the fruits of that today. Brazil is a class system, 70% of the people live in poverty, 22% of which live below the poverty line. This combined with a poor educational system makes that only a few can afford to have private education in or, better, ouside of Brazil. The descendents of the enslaved Africans are still the poor people of today in Brazil.”

This made me wonder why things went different for Martins. Over the years he has gained recognition with his drawings and paintings internationally. His work is shown in Germany, Senegal and Haiti and is included in the Drawing Centers Viewing Program in New York.

“I started drawing when I was 9 years copying pictures in magazines. I was fascinated by it and kept drawing. I only started at EVA Escola de Artes Visuais do Parque Lage in Rio in the 80’s. I attended all possible courses of painting. I paid for it by ‘selling’ bread for one of the professors at the school, but it never got me the official diploma”.

Martins’ uses a variety of surfaces, canvas, fabrics, recycled wood, panels, paper. He works on the streets as well as the walls of museums and galleries. Martins is a known fixture in the Santa Teresa artist community. After the studio visit Martins points out one of his murals on a street near his studio.

“My process is one of collage, I like to use known images but adjust them to my own context. By using my point of view I give the images a new, a different definition and meaning. I keep re-using the adjusted images in different works.” 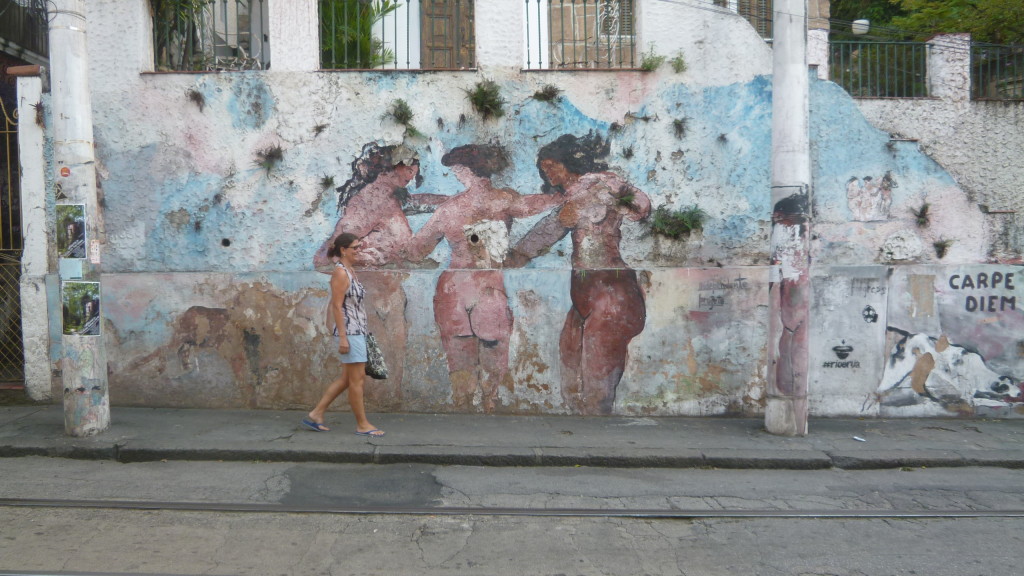 Back to the exhibit at MAR. ‘Do Valengo to Favela’ is trying to fulfill all of the museums mission in one presentation. The result: too many works cramped in the rooms with no breathing space for the works or for the audience. It takes the strength away from the individual works.

However,  the more contemporary works from Ayrson Heráclito that definitely sparked my interest. His work is very strong and has a lot to say, so much that the viewer easily gets distracted. It talks about in the colonial time, apartheid and the longing for freedom. He uses materials as wood, dende (palm oil) and sugar. They all find their roots in the colonial times. 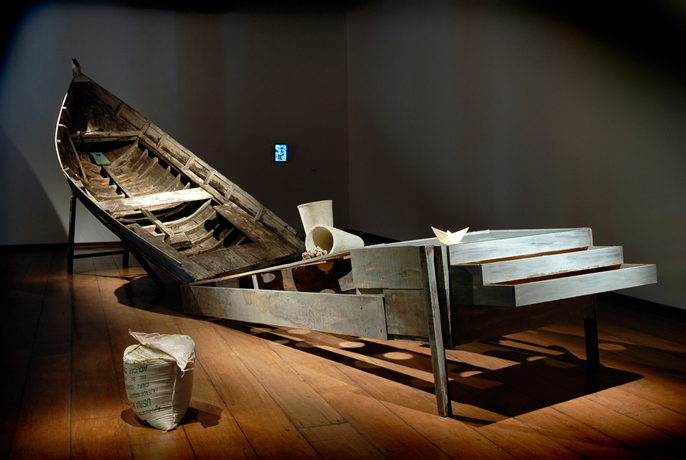 The work Segredos Internos (Inner Secrets) was inspired by a poem in the Bahia de Gregorio. In the 10 meter long installation we see the bow of a ship that breaks off and transforms into a colonial sugar refining table where we see the brown and refined sugar. His work is stripped of the folklore that we know when we think of Bahia. His work has a contemporary language speaking of pain and pride, Freedome, ownership, transformation, things falling apart and being build back up again.

Ayrson Heráclito works comprising installation, performance, photography, and audiovisual media. It incorporates elements of Afro-Brazilian culture. It documents and translates the past to today and into the future. Another work of his hand in the exhibit is Bori. 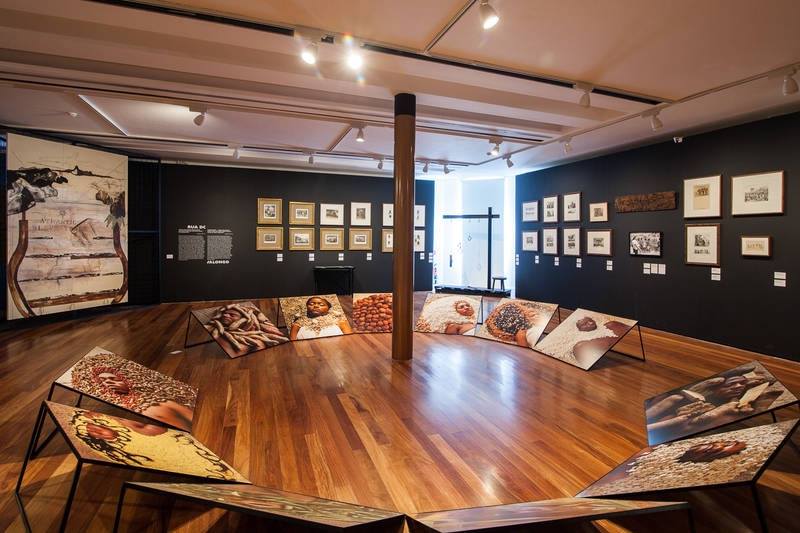 In the Yoruba African dialect Bori is a fusion of the words bó: offer, and ori, head. Offering food to the Orixás nurtures the head and soul and evokes the protection of the gods. The elements of the offering express wishes common to all people: peace, health, prosperity, love, longevity, etc.

Documenting a performance has been a good way for performance artist to monetize their practice. The performance took place on the floor. The curators must have tried to represent that in their. We see a circle of headshots placed slightly tilted in a circle on the floor. The audience can walk in an out the circle as to be part of the work. It does not really work. The photos low on the floor feel flat and distant, while the Afro-Brazilian culture is all about senses, feeling and emotion. Like the other it looses its strength and impact it could and should have.

In my last week in Rio I see a lot of work in museums, galleries and studios. I don’t meet another Artista Plástico Negro. Is Martins the only one? Isn’t that strange? Am I the only one who gets disturbed by this fact?

From Valongo to Favela: Imaginary and Periphery
Until Feb 8, 2015 at the Museu de Arte do Rio (MAR), Rio de Janeiro

← The Other Narrative
THE SUCCESS OF CHRIS OFILI →