THE SUCCESS OF CHRIS OFILI 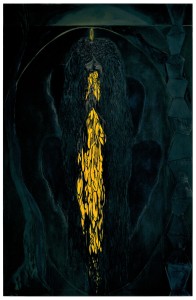 Fifteen years ago Chris Ofili made “sick stuff” according to the mayor of New York. He is back in town now with an exhibition – ‘Night and Day’ – in the New Museum.
The reactions on this show are completely different. No accusations of blasphemy. No angry visitors. Ofili’s return is the return of a hero of British contemporary art. The critics hardly have enough words to praise the artist. “Breathtaking”; “(…) an endless sensuous dive into the most carnivalesque pleasures of painting”; “His paintings mesmerize (…)”; “Great art” etc. etc.
What happened? Did the city change? Did the audience change? Did the time change? Did the artist change?
Rob Perrée tries to give an answer.

THE SUCCESS OF CHRIS OFILI

From ‘sick stuff’ to ‘breathtaking art’ 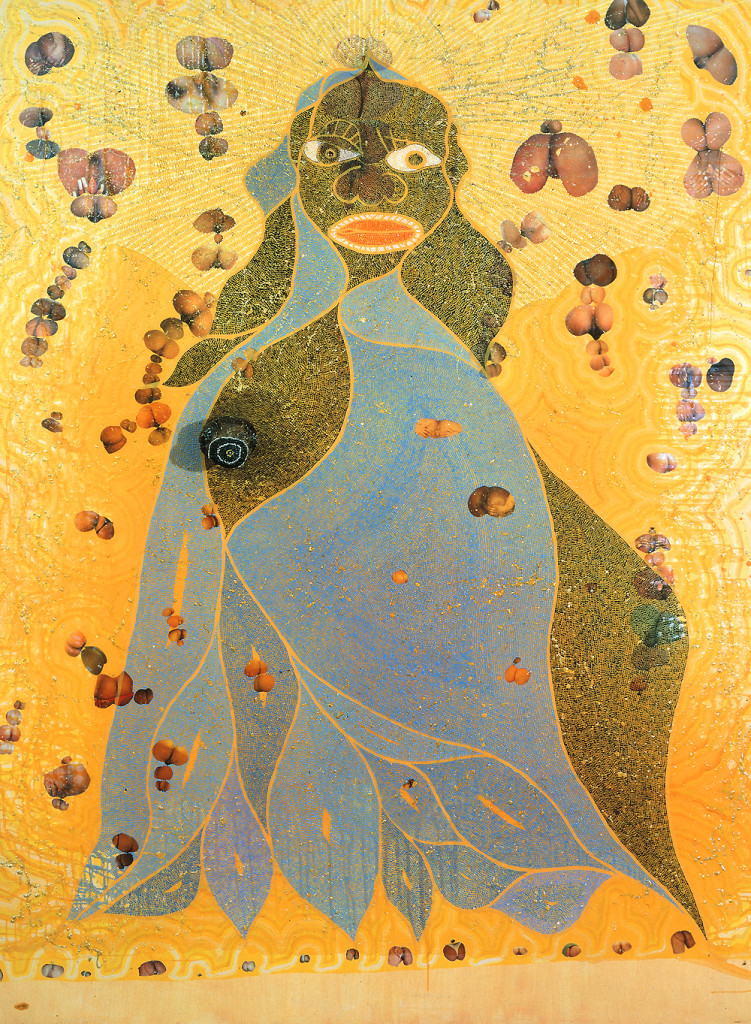 In 1996 Chris Ofili makes ‘The Holy Virgin Mary’. A black woman with red lips, surrounded by cut out photographic body parts, decorated with glitters, leaning on balls of elephant dung. Her right breast is also made of dung. The overall background color is yellow, Mary is dressed in transparent blue.
At that moment he could not predict, not even in his worst dreams, that that particular painting, three years later, would be at the centre of an emotional controversy that almost caused the (financial) destruction of the Brooklyn Museum. ‘The Holy Virgin Mary’ was one of the works in the exhibition ‘Sensation’, composed of works out of the Saatchi collection. An overview of the work of Young British artists of the nineties (YBA or Brit Art), exceptional talents from (mainly) the Goldsmith Academy and the Royal College of Art who had waked up the almost sleeping art world.
The Daily News started the controversy with the headline: “Brooklyn Gallery of Horror”. The mayor of New York – the Catholic Giuliani – followed. He did not even see the painting, but the story around it was enough for him to threaten the museum. The work “derided someone else’s religion”. It was “sick stuff”. The director had to remove the painting immediately. If he did not, the city would withhold the funds the museum got from New York. What initially looked like a crazy move, was not that crazy after all. The mayor got the support of Catholic and Jewish organizations and of a big part of conservative America. He knew that he was the mouthpiece of the common man. Although it is hard to proof, the African origin of Ofili must have played a role in the conflict. As New York art critic Jerry Saltz formulates it casually: “the city was still roiled by white-ethnic politics (…). “
The director of the museum referred to the First Amendment and refused to remove Ofili’s work. In how far Saatchi himself influenced this decision is unclear. The British collector financed the exhibition and, by doing that, he weakened the position of the museum. It was in fact his show. Ofili, much later, defended his work with: “What happened to freedom? You have to stand up and go with it, because the minute I start editing….then I’ve got some serious problems that I have to deal with on my own.”

When Giuliani realized that his legal position was not strong enough to effectuate his threat, he more or less dropped out. In the meantime the popular press calmed down and the museum got the support of a growing amount of more progressive Americans. ‘The Holy Mary’ stayed on her dungs. ‘Sensation’ attracted thousands and thousands of extra visitors.

Now, 15 years later, Chris Ofili is back in New York with the exhibition ‘Night and Day’ in The New Museum. ‘The Holy Virgin Mary’ is back too. Quietly leaning on the same elephant dungs. The reactions on the show are completely different. No accusations of blasphemy. No angry visitors. Ofili’s return is the return of a hero of British contemporary art. The critics hardly have enough words to praise the artist. “Breathtaking”; “(…) an endless sensuous dive into the most carnivalesque pleasures of painting”; “His paintings mesmerize (…)”; “Great art” etc. etc.
What happened? Did the city change? Did the audience change? Did the time change? Did the artist change? 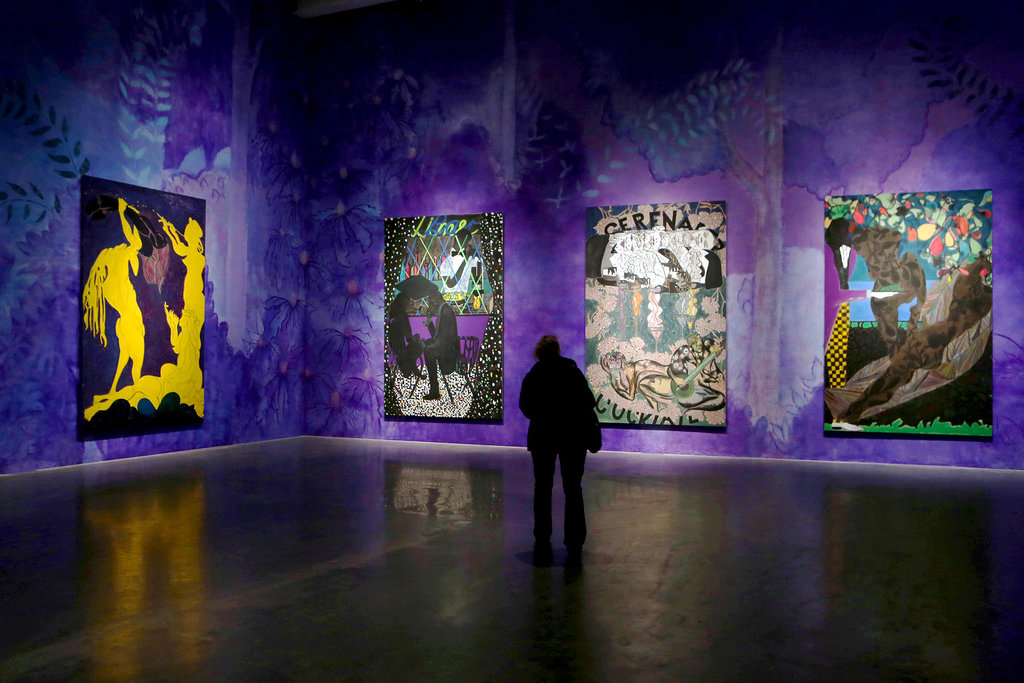 Not only New York policy changed, the art world changed too. It is more and more a world where the color of money is more important than the changing colors in the work of Ofili. The average Russian collector is not interested in the content of the paintings of the British artist, but more in the value of his works after an exhibition in an important American museum. That sounds cynical, but the reality learns that many so called collectors buy work to sell it for a higher price one week later. Artworks are transformed into shares. Art is a commodity.

The situation of black artists in general is different now. In the beginning of the 90’s they were trying to get seen, to get recognized, to get into museums and galleries. Now artists like Kara Walker, David Hammons, Steve McQueen, Glenn Ligon, Isaac Julien, Julie Mehretu, Kerry James Marshall have exhibitions all over the world. They are widely respected, they are on lists of bestselling artist, they are famous. Art loving audiences don’t seem to pay attention to skin color anymore.

If you compare ‘The Holy Virgin Mary’ with the recent paintings of Chris Ofili it is obvious that his work changed a lot too.
The paintings he made in the mid 90’s were reflections of the hip hop culture. All kind of elements were brought together without hierarchy. Found elements, dots, pieces of photos, glitters, bling-bling, (star)names and elephant dungs. Religion, sexuality, women and music are returning themes. Because of the ‘street language’ , the subjects, the directness and the decorative imagery the works look different, unusual, not in line with the western tradition. Many visitors felt uncomfortable looking at them. Even serious critics did not know how to react. They used qualifications like “Woman-denigrating” , “sexist”, “crude” and “pretentious”. There were no official complaints, but many people had mixed feelings about these works. Unknown makes unloved.

The Giuliani attack and the media circus that followed had a “massive” effect on the artist. For two years he lurked in his London studio, stopped answering the phone and refused interviews. He worked in silence on a series of 13 paintings.
In his presentation in Venice in 2003 he stepped away from his earlier work. The series of large red- green- and black paintings tell the romantic story of a couple in an African garden of Eden. ‘Afro Apparition’ (2002-2003) is a good example of that change. The colors refer to the Pan-African flag of Marcus Garvey (red is the blood of martyrs, black the color of their skin, and green the nature of Africa). The hip hop culture is gone. 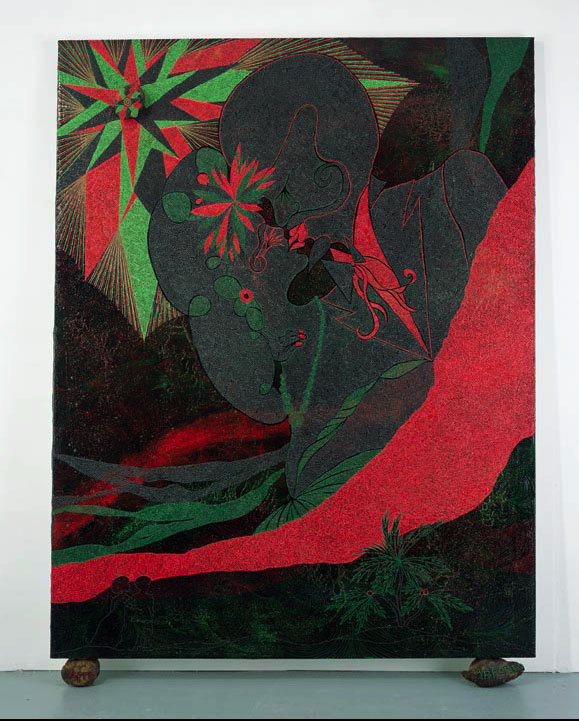 After a number of visits to the island Chris Ofili decided to move to Trinidad in 2005. In interviews he likes to say that he does not know why he moved. “I am quite comfortable with not knowing.” I hardly can believe that. A couple of reasons come to mind. Not even one percent of the population of the island is white. The concept of black contradicts the British one. That must have played a role. Ofili wanted to be away from noisy and hectic London, another good reason. His colleague Peter Doig moved to Trinidad too. They met as students and they were working together in the past. They are friends. But the most important reason must have been the landscape, the nature of Trinidad. Especially the light fascinated him. The transition from light to dark is very special. “That moonlike glow, the feeling of night that you get there this time of the month; it’s not dark nor light, everything is reflecting back. (…) You get that kind of light here when moving across a dark beach. You see shapes where you can’t quite tell if you ‘re seeing a figure or an animal or a leaf (…).“ 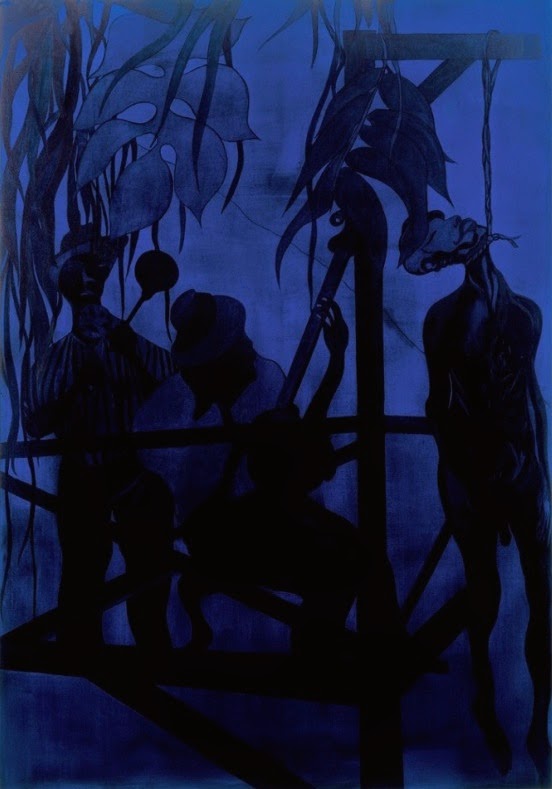 No wonder he started on Trinidad with his big blue paintings. ‘Iscariot Blues’ (2006) for instance. The blue – painted on a silver ground – is taking the viewer in. You hardly can see what the ‘story’ of the painting is. If you look from different sides the shadowy, flat figures unveil themselves a bit, but they stay mysterious. Watching becomes experiencing. Looking is guessing. In the New Museum exhibition these blue paintings hang in a darkened room. To stimulate that effect.

In his big, recent works the colors are back – yellow, purple, pink, orange, green – but the paintings are as far away as possible from his early hip hop works. “The way I ‘ve approached recently is to keep the forms as simple as possible, working in a way that has no dressing.” A certain subject triggers him and makes him curious. Not a specific theme, but subjects that pop up from looking around, from thinking while doing nothing, from talking to people, from looking at art. So his references can go from bible stories to a poster image he has seen on a wall in Port of Spain. The curiosity “fuels art making”. 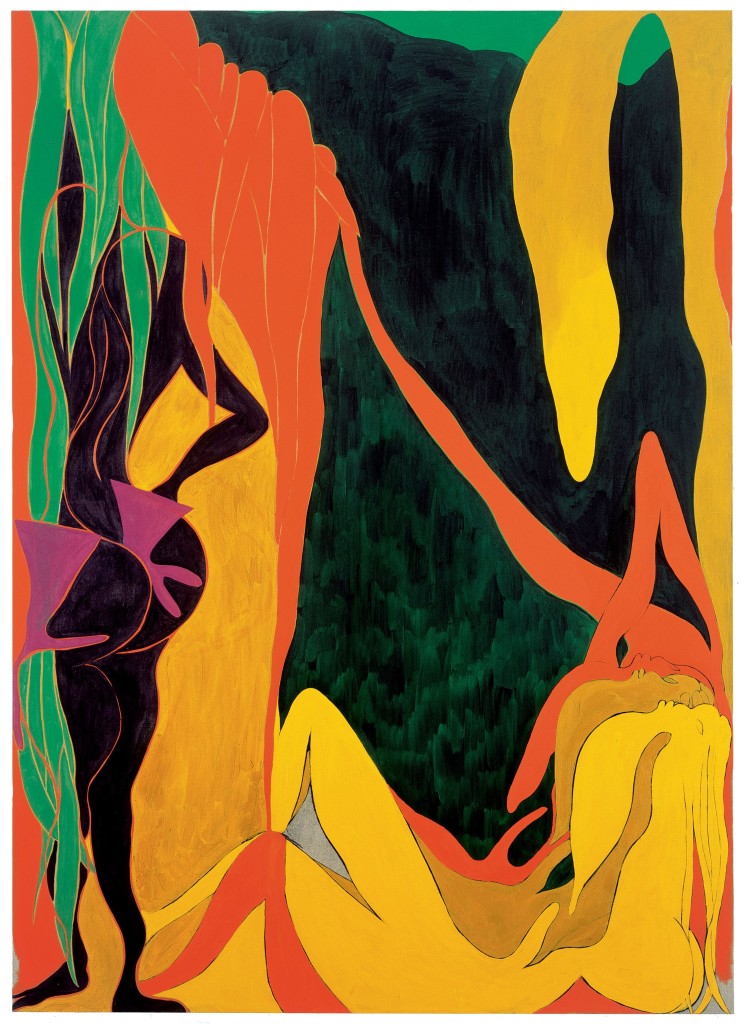 Because the references are more familiar, more Western – bible, nature, Matisse (‘The Raising of Lazarus’), Goya (‘The Healer’) – and his style is more simplified, ‘undressed’; because his work is more about the act of painting than about the act of provoking, Ofili reaches, without doubt, a bigger audience. That, in combination with the other factors I have mentioned explains why New York is now applauding for Ofili.

For me he was always one of the most interesting artists of his time. He always managed to express his ideas, the world he was living in, in a new, surprising and confronting way. He has the guts to change if he feels the necessity to do that. He takes the time to develop himself ( no more than 5 paintings a year), he changes location to stay inspired, he improves his skills in order to give his work that intriguing, mysterious, mesmerizing quality. He does not lean on success, challenge is his drive. His new paintings are not less confronting than his Virgin Mary. Who could predict 15 years ago that he would turn into a painter pur sang who would allow the influences of the Western canon without losing his originality, who manages to drag the viewer in like Rothko did, who makes you feel excited and at the same time feel lost in an overwhelming, vibrating space.
That makes Chris Ofili a great artist.