Composing with the eye: The work of Peter Clarke and Lionel Davis

Composition of the Eye is at a certain level a retrospective exhibition, it is also about the two artist careers that has spanned over fifty years combined. It is also about the merging of their discourses, this way both their aesthetic influences and impact can be deemed for their respective achievements. (…) Both their repertoire is or was informed by the techniques that informed Black artists during the apartheid era.

Composing with the eye

The work of Clarke and Davis

Cape Town legendary artists Peter Clarke and Lionel Davis were hosted by Smac Gallery Stellenbosch in an exhibition titled The Composition of the Eye in an exhibition that explored the artist’s works in their guise as artist examining their urban environment with a sociological and socially conscious perspective. Davis and Clarke were artists that anchored the research and production project in the now closed C.A.P school for visual arts. Both their repertoire is or was informed by the techniques that informed Black artists during the apartheid era. Their works explore techniques from collage, print making, collage and traditional painting. In this exhibition the focus is more on the works that explore paintings and Peter Clarke’s drawings. 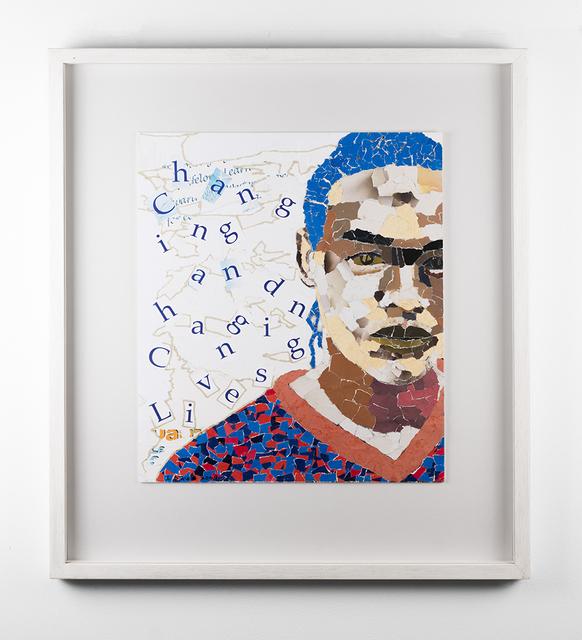 Lionel Davis was a political activist during apartheid; this was a period that coincided with his exploration with his print work through political posters. Last year the National Gallery here in South African held a retrospective exhibition of Davis’ work titled Gathering Strands an exhibition that explore the Cape Town in the era before his political incarceration, with works ranging from posters, paintings including works from the Masquerade collection that is incorporated in this exhibition with Peter Clarke.
Having passé in 2014 Clarke had developed a reputation for being one of the foremost artistic voices in Cape Town during apartheid. He work was also politically charged, imbued with a sense of serenity and pathos that characterized the sociological aspect of his visual representations. Clarke shot to prominence in 1947 starting a career that spanned over 60 years. Initially focusing on Modernist approach, his developed to experimental and avant-garde proportions with his handcrafted concertina books. This playful and whimsical aspect of Peter Clarke’s work is not presented in this exhibition, rather with his passing; this exhibition has been imbued with a retrospective element. 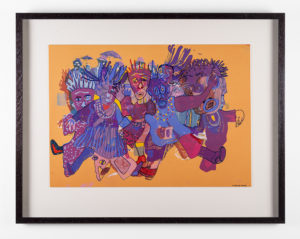 In the exhibition Davis’s protest poster print was included titled Working Class Solidarity (2009), included in an exhibition that incorporates his masquerade series. This series explores issues of identity and political issues through the exploration of masks as markers of identity, communal diversity and the ambiguity of what is unified and disparate in the social cultural dispensation. Like the piece Mask 7 (2009), imbued with a variety of masks, influenced by African motifs and the expressive gestures of the formative organic visages that characterize the cultural social dispensation. This is a piece that articulates the eminent spiritual disposition during the context of transformation the followed the fall of the previous dispensation. 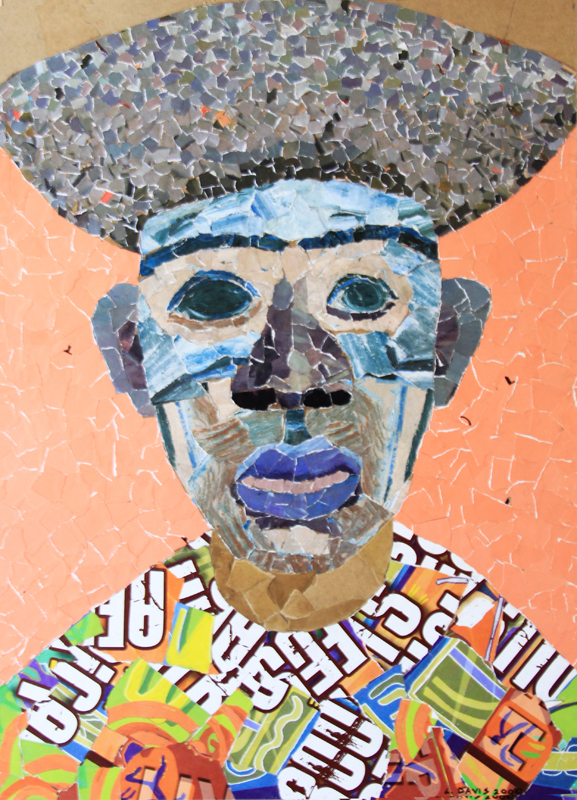 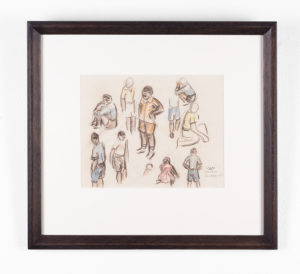 Peter Clarke’s works in the exhibition are characteristic of the artist’s formal and traditional paintings. Imbued with that somber quietude that characterizes the artist’s works. Like the piece Untitled (1951), executed with the elliptical and succinct measure of sketch drawing, imbued with characters in pensive gestures and brooding gestures. The piece captures the contemplative atmosphere in some of the courters of the struggle against the policies of the previous dispensation. 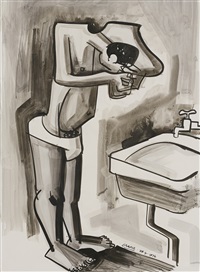 The sociological aspect in the art works that artists from previously disadvantaged backgrounds and were involved in the discourse of emancipation, forms for the collective visual representation and social archive of the liberation discourse that anchored and informed what was moral about it. This is reflected in the piece titled Clean Up (1976), with its contemplative and somber effect, the piece articulates meager circumstances that communities characterized by the disadvantaged where the subjected to during the previous dispensation. African Pastoral (1960) is another piece that is articulate with this impact; this is a piece in which what is sociological and collective is exhibited. 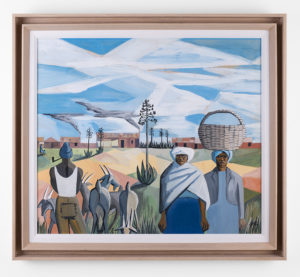 Exhibitions with these artists would be imbued with the connotations of the retrospective exhibition; it becomes necessary to conceive them with these connotations that can be characterized as a social archive. They articulate the collective memory of the cultural dispensation, this not only about the individual artists visual voices and vocabulary, it is also about concretization of the collective immanent experience of the community in the previous dispensation. The political voice in Davis’s work and the callous collective experience of the previous dispensation in Clarke’s work combine to articulate how art concretizes the sociological implications of the cultural dispensation. 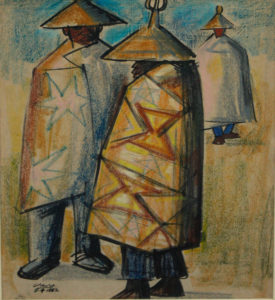 Inherent in Clarke is the propensity to imbue his works with an auto-referential narrative, this not only pronounces the immanence within the socio-cultural narrative, it also imbues the discourse around diversity that characterized the discourse of emancipation during the previous dispensation, it also pronounces the propensity of the work to articulate its own social and spiritual influences. The temptation to write Clarke and David’s works as through the derogatory lens of township art as the works that was produced by artists from disadvantaged backgrounds was designated relegates not just the exhibitions immanence or intrinsic value; it also diminishes the gallery as a space that operates as this social archive. Clarke was an artist during the days of apartheid had difficulty of finding spaces to exhibit, especially in the more established galleries around South Africa. His works mostly influenced by collage, he created abstract collages that straddled with the disintegration and concretization of relating. These are works that were inspired by his immediate personal experience; works whose existential influence was contingent on the expedience of imbue elements with relationships with connotations for longevity and the whimsical. Stevenson Gallery took up the mantle to exhibit and disseminate the artist’s works from the early 2000, these works form part of the research project in the gallery and its collection. 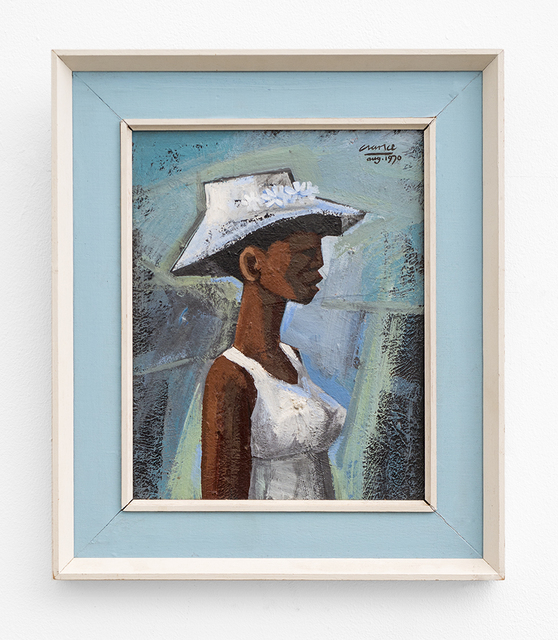 In the exhibition Composition of the Eye Smac Gallery has incorporated the artist’s works that are painting orientated. The sense of the sentimental can also be gleaned in these works just like in the collection of collage pieces; the serene atmosphere, the whimsical and the existential assume collective and connotations in Clarke’s painting compositions. This sense of the sentimental is reflected in the piece titled Basuto Men in Discussion (1962), the serene and contemplative quality that permeates his works in the exhibition can also be gleaned. Clarke was an artist that discoursed diversity and inclusion in the cultural dispensation through the passive resistance of his subjects, their ability and quality that enables them to concretize what is immanent about their organic social contexts. This piece resounds with the connotations of disintegration and immediacy that the strategies of power in the era of apartheid sought to deny and desecrate in communities that are deemed disadvantaged. This way the work’s political stance not only becomes imbued with a measure of the personal, it also operates with the ambiguity of the isolated community and broader national discourse of emancipation. Even the materials utilized to execute Basuto Men in Discussion demonstrate this measure of immediacy and the problematic of access that artist during the previous dispensation. The work is imbued with the austere and linear animate lines that informed the aesthetic of most artist based in previously disadvantaged backgrounds, imbued with a harmonious consistency, the about is about existential experiences, the distance and impersonal position of the voyeur and the distant and intimate position of the relating subjects. The sociological in the piece assumes what is affective, the pervasive discourse in Clarke’s work can be discerned, and where he does not distinguish between rural and urban issues in his discourse, with the intention of capturing what is local in relation to what is national or global. 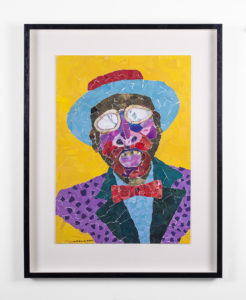 Lionel Davis during the apartheid dispensation was a political activist next to being an artist and was also incarcerated at Robben Island with other political prisoners like Nelson Mandela in the 1970s and 1980’s. His work is overtly influenced by his observations of the social and cultural dispensation during that era. His posters with the print aesthetic operate with not just pragmatism of highlight political and social events, but they also operate and operated as social awareness in the relevant communities that the events highlighted. For Davis the political becomes personal in the Masquerade collection, communal diversity and the myriad of personalities that informed his political awareness, the social consciousness that anchors the discourse of this collection permeates with the economy and immediacy of the visage or face being the repository for moral and political force. The deliberate amalgamation of a variety of faces, the multi-cultural influences through the incorporation of images influenced by African masks, the collection is a reminder of the moral stance during the struggle and the canonization of the narrative of corruption and moral ambiguity after the realization of the demise of apartheid. For Davis, the context just prior to the demise of apartheid marks an existential examination of the process and the current political and cultural climate regarding the motivations and influences that inform the political leaders in the cultural dispensation. This is reflected in the piece Mask (2009) from the Masquerade series, a Cape calypso musician articulated in the caricature and ostentatious facial features of calypso performers, Davis created a piece that discourses the neglected aspect of diversity in the post apartheid era. He makes the statement about the social imperative of diversity and cultural inclusion that informed the moral force that permeated the discourse of emancipation. For Davis it is not just the piece’s propensity to unsettle the viewer, it is the imperative of individual and cultural expression that informed the context and discourse of emancipation. A mixed media and collage piece, the connotations of immediacy and expedience of created with what one has at his disposal imbues the discourse of this piece with a measure of the eclectic and spontaneous. This expedience is also that which informed the ethic of diversity and socially organic implications of protest, the self sacrifice of political incarceration, but also it also discourses the tyranny of wresting individual expression. 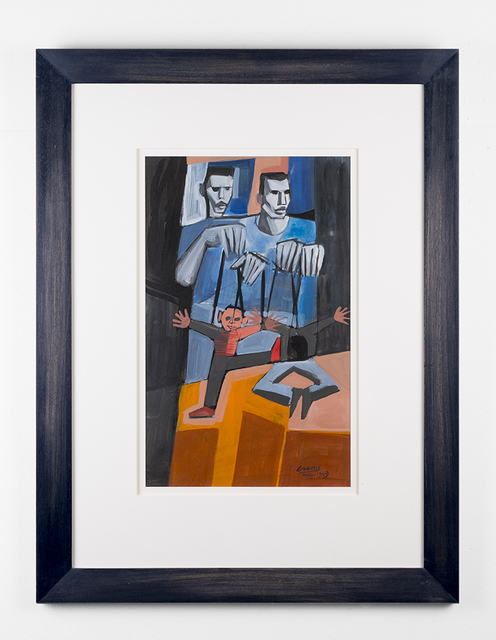 Composition of the Eye is at a certain level a retrospective exhibition, it is also about the two artist careers that has spanned over fifty years combined. It is also about the merging of their discourses, this way both their aesthetic influences and impact can be deemed for their respective achievements. Clarke’s somber quietude, with its obvious influence by what is elegiac about poetry, has seen an artist that articulates and visualizes affect in a measure that is selfless, imbued with what is collective about the cathartic implications of protest and organic social immanence. This he achieved by creating works whose sociological connotations and discourse range from urban to rural, collage to the animate connotations of the subjects of social and political oppression during apartheid. Davis work with its implications for individuality and the moral problematic, discourses the illusion of political emancipation, the space in which it can be influenced by what is external or social without compromising what is moral about individual emancipation. The two artists combined imbue an exhibition with the connotations of a social archive in an era of transformation informed by the disintegration connotations of political and social responsibility.

Composition of the Eye was presented at SMAC Gallery, until April 7, 2018

← Canon Griffin: Clowning The Art Or Not?
Anthea Hamilton →