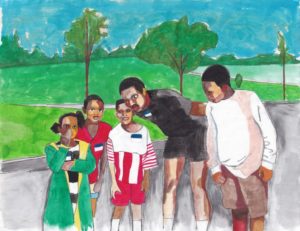 FOR AN EXHIBITION in his hometown of Baltimore Derrick Adams drew on his personal history, sourcing images from a family photo album. Inspired by the decades-old images, he made a series of paintings documenting scenes from his childhood—a pair of bridesmaids in matching turquoise blue dresses, children playing in the yard with a yellow ball, the family gathered in the park to snap a photo, a man tenderly holding a baby in a christening suit.

Opening Sept. 20, “Where I’m From — Derrick Adams” at The Gallery in Baltimore City Hall, will feature 10 large-scale works from a new body of work called Family Portrait. The exhibition is Adams’s first solo show in the city where he was born and grew up in the 1970s and 80s. 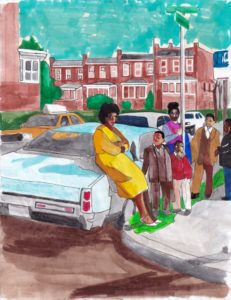 Family memories are at the root of the show. The series is “archiving our history and functioning more broadly as reflections on representations of kinship and close-knit relationships,” Adams said in a statement about the forthcoming show.

A Brooklyn-based artist who has exhibited internationally and is represented in public and private collections, Adams earned an MFA from Columbia University, studied at Skowhegan, and received the Joyce Alexander Wein Artist Prize from the Studio Museum in Harlem in 2016. 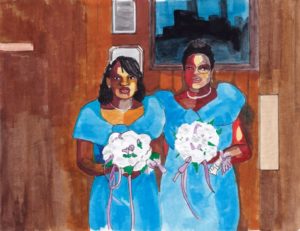 Before all of that, he was a budding art star in Baltimore. When he was 10, Adams attended Edgecombe Circle Elementary School, where his art teacher encouraged him to enter a citywide student art competition. The contest was called “My Heritage, Myself.” Adams followed her suggestion, entered, and emerged as one of the winners. The prize was lunch with the mayor and the display of his artwork in Baltimore City Hall. The forthcoming exhibition serves as a gratifying return for the accomplished artist.

Family memories are at the root of the show. The series is “archiving our history and functioning more broadly as reflections on representations of kinship and close-knit relationships,” Derrick Adams said.

ADAMS WORKS IN A VARIETY OF MEDIUMS, including performance, video, and sound, in addition to painting. Describing his practice, he states that it “focuses on the fragmentation and manipulation of structure and surface, exploring self image and forward projection.” He is known for his vivid use of color, forming his figures and interior and exterior spaces with graphically defined planes of color. 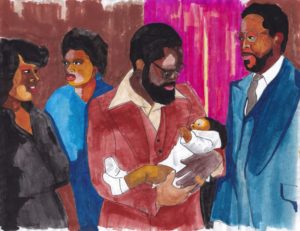 For the oil on canvas works Adams is presenting in “Where I’m From,” while traces of his signature style are evident in the manner in which he renders the faces of his subjects, his overarching approach is a departure. Vibrant color remains a prominent feature, but the new series has softer lines and an expressive, painterly quality that reads as watercolor. The choices give the work a nostalgic feel and position the images as counter-narratives.

Set in a city whose reputation is regularly sullied as a bastion of crime and poverty by some media and, more recently, national political leaders, Adams’s work reclaims the identity of his hometown. Parts of Baltimore certainly have intractable problems, but it also has proud and committed citizens living throughout the city. The artist’s ordinary, celebratory, and heartfelt scenes are nearly two generations removed from the contemporary moment, but his message still resonates. 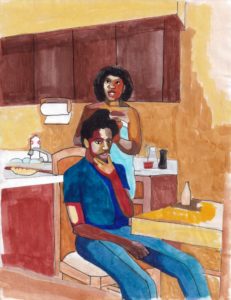 The paintings are a valentine to Baltimore, his family, and Adams himself. Even while waiting for the city bus on the street corner, six deep in church clothes, his childhood memories are framed by family togetherness and the promise of a young artist. CT