Robin Rhode: Memory is the weapon

About:
Whether it is his photographic works, digital animations, performances, wall pieces, or works on paper, the core of Robin Rhode’s multimedia oeuvre is the drawing, the line. Born in Cape Town in 1976 and raised in Johannesburg, he first studied art at the Technikon Witwatersrand, now the University of Johannesburg, followed by a postgraduate program at the South Africa School of Film, Television and Dramatic Arts in 2000.

The influence of urban music, film, popular sports, youth culture, and the local tradition of storytelling have all influenced the development of Robin Rhode’s initially typical Street Art aesthetic. His trademark is a wall that stands in a socially disadvantaged district of Johannesburg. In contrast to Graffiti and Street Art, however, he is not interested in what he leaves behind in the urban context, but rather in the process. Step by step, he photographically documents the development of narratives on his stone canvas, which in turn carries its own history. The sum of the photographs forms the narrative. While he initially drew simple sports equipment with chalk on the ground or the wall, his designs and themes have become increasingly complex—a content-related balancing act between the history, culture, mentality, signs, and codes of South Africa and the abstract language of European art history. Here, the drawing is activated by its connection with the body: Children do gymnastics on sports equipment, a pianist destroys a piano, an agile dancer cuts colored triangles on the wall with a huge hedge trimmer, as if they were cut-outs à la Matisse. 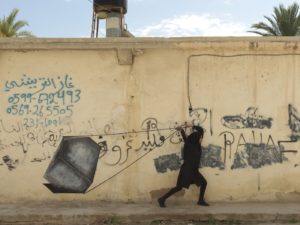 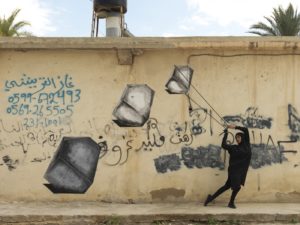 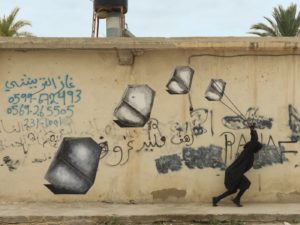 Since 2002, Robin Rhode has lived in Berlin. In contrast to the colorful wall works that are still created in South Africa, in Germany he explores black-and-white approaches to drawing. Here, he draws not only with soap, charcoal, chalk, and paint, but also with everyday objects. Chairs, bicycles, and beds become performative drawing instruments—an instrumentalization of the Readymade. The expressive drawings resulting from his energetic performances stand in contrast to the perfected illusionism and the intended lightness of his elaborate wall pieces. Robin Rhode reduces complex, at times even socially critical or analytical content to a few visual signs or, as he puts it, simplifies chaos with the means of art.

After the exhibition at the Haus der Kunst in Munich in 2007, the presentation at the Kunstmuseum Wolfsburg is the first solo exhibition in Germany since twelve years. With more than 800 square meters of digital animations, photographic series, drawings, and sculptural elements, as well as performances, it offers a broad overview of Robin Rhode’s oeuvre, including new work groups, on which he is currently working. The exhibition will be accompanied by a richly illustrated catalog in German and English, including a preface by Andreas Beitin, an extensive interview with Robin Rhode and an introduction by Uta Ruhkamp.