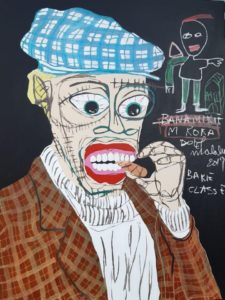 Dolet MALALU WATEKO, born February 7, 1980, lives and works in Kinshasa in the Democratic Republic of Congo.

About
He was mistakenly introduced as “self-taught”, yet he followed the teachings of the Academy of Fine Arts of Kinshasa integrated in 2000, after literary studies in Latin and Philosophy. He has exhibited since 2002 and his experience and education are particularly interesting, even if they can baffle us. Indeed, he is an artist in the full sense of the term, Dolet MALALU did not just paint. 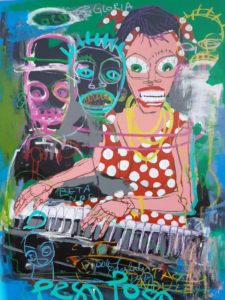 Since 2002, he has participated in a cross-residence and a workshop exchange with artists Fabien VERSCHAERE and Seamus FARREL at the French Institute of Kinshasa. Shortly thereafter, more projects followed, some solo, but many, with other artists from other countries.
Thus in 2006, Dolet MALALU worked in the creative workshop of urban scenery of Kinshasa with Beninese artist of great notoriety, Dominique ZINKPE. In 2009, he collaborated on the in situ workshop of creation and reflection on contemporary art driven by the Cameroonian artist, unfortunately now gone, Gody LEYE Kodjo in Kinshasa.
In the same year, Dolet MALALU participated in a workshop on musical posters of Congolese musicians with the French artist, living in Senegal, Vincent MICHEA. At the same time, in 2003, he set up a creative workshop and began the project “Kitendi (Dandy) Religion or Sapologie (Sape)”.

In 2010, the artist tried his hand at cinema and began as an extra in the film “Viva” with the Congolese director Djo TUNDA WA MUNGA, in Kinshasa. An obsession with show business will not let him go as in turn Dolet MALALU will appear as a machinist, then comedian and electro machinist and still boom operator, participant and advisor. In the end he completed a film training course in KIRIPI SIKU’s MUTOTU cinema agency. 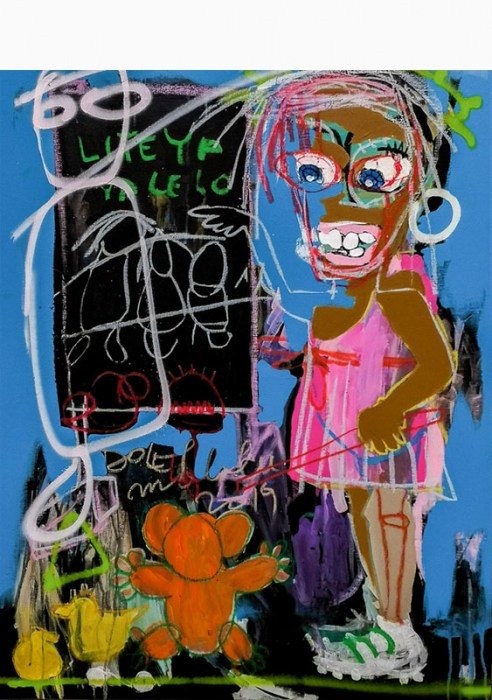 But we’re here to talk about MALALU’s visual arts contributions, and there’s a lot of material there too. He has exhibited and participated in events in multiple places, whether in Kinshasa, obviously, but also Strasbourg, Brazzaville, Pointe Noire, as well as Cameroon, Uganda, Italy, Belgium, Germany and Morocco!
Two of his works successfully sold in a public auction at PIASA in Paris in 2018, dedicated to contemporary African art.

Not being in the vein of the “naive” artists who have made the success of the Kinshasa School a little overrated, Dolet MALALU attacks with strong works, organized in their disintegration that address the themes which are dear to him and, in spite of some tangents and false clues, they essentially refer to the “undermining” of this typically Kinois sartorial art which is at once a work of art, a manifesto, a religion and a way of being, of existing and of appearing.
A veritable instrument of recognition, “la sape”, the fact of dressing in an extraordinarily original way, in garish tones and with implausible accessories, is for young Congolese men a way to assert their identity, their personality, their way of life, from party to celebration, on city nights and probably to deny the misery and the tragic hazards of life. 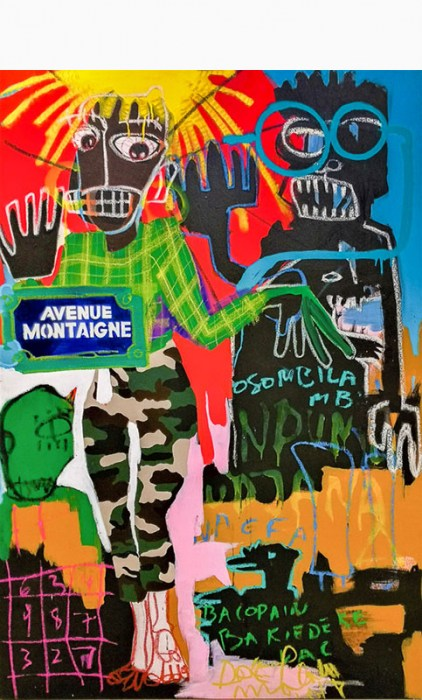 The “undermining” is also at the origin of many new words that have deviated “sapeur” from its usual sense, even the word “sapology” that he does not hesitate to call “Kitendi Religion”!
This way of life has influenced most contemporary Congolese artists who manifest themselves in their creations; with large frescoes depicting life and often nightlife, among the most famous are Chéri SAMBA or Chéri CHERIN, to name a few. In his original way, Dolet MALALU fits in their wake as for his themes, but does not look like them in his pictorial quest. Inhabited by human characters who have a very strong presence, his canvases are often covered by graffiti, show men and women, together or separately, in the acts of urban life; in places and moments that a few clues, such as street signs, or the very titles of the works, reveal, without seeming to have any formal connection.

With their bulging eyes, detailed jaws, all gashed with raging paint, Jean-Michel BASQUIAT is not far away, but we can not talk about pastiche or inspiration, just some references, in the form of discrete homage.
Dolet MALALU has a tonic painting style that is fun to see and will retain its power and charm for a long time.(courtesy OutofAfrica Gallery)