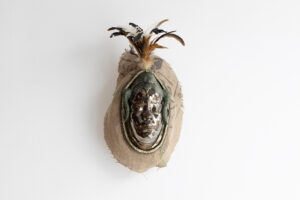 Text by Dominique Fontaine
English Revision by Nancy Wallace
The first decades of the 21st century shaped the period of reconfiguration of the world order, according to Pedro Pablo Gómez1, into three options: rewesternalization, dewesternalization and the decolonial option. Eddy Firmin’s artistic practice follows a trajectory that ranges from the decolonization of knowledge and aesthetic theory to the decolonial option or aesthetic decoloniality. The basis of this approach is based on the Gwoka (the practice of art and knowledge specific to the islands of Guadeloupe), a global artistic practice of resistance that is part of a Caribbean epistemology. Eddy Firmin’s work is a complex and heterogeneous practice that encompasses painting, sculpture, video, installation, poetry and performance, thus questioning the means of reinscribing a visual search in filiation with an intangible heritage. The fundamental questions underlying his approach are, in particular, how the modalities of knowledge production in colonized countries alienate the imagination and how to restore a way of being to the world. Guided by a quest for identity, exiled in Quebec, Firmin as a follower of border epistemology or border thinking combines his two heritages or double consciousness and affirms a praxis that links art and life, art and intelligible knowledge, art and transmission, art and resistance. In doing so, Firmin inaugurates a new way of existing, experiencing and producing knowledge about the world. The bossale method he introduces is for him a process of excavation of the logic of secular remediation. 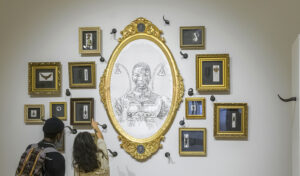 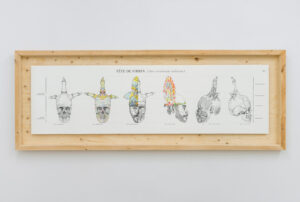 Firmin’s focus is on deploying a personal narrative in connection with the ancestral collective imagination, and he integrates signs of an invented alphabet into his works. These signs that designate his works are for him a means of evading in part the coloniality of knowledge and colonial domination. For years, Firmin has been exploring identity through self-portraiture. He thus has recourse to an imagination marked by the relationship to the body. The body, in its own right, is a place of knowledge, but also of exploration. His Self-portraits are a way of approaching knowledge, the politics of knowledge. The corpo-politique of knowledge: dance, storytelling, songs, music. In fact, collective thinking and the linking of two politics of knowledge permeate his entire work. As an activist, he questions the artist’s role. His epistemological struggle is embodied in sculpture, and thus gives materiality to his thought. Hybrid, Firmin’s work combines plural practices, diverse materials, which are in circulation between two cultural references. These universes are thus all linked by a strategy of rewriting history, of making people discover a multipolar and intercultural world. Making visible other stories and cultural genealogies, which despite slavery and colonization are still very much alive, animates Eddy Firmin. 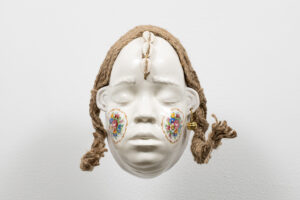 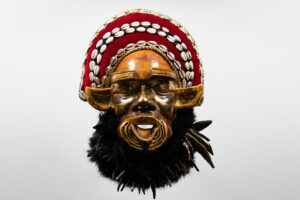 1. One of the main instigators of the concept of decolonial aesthetics, an artist, professor and director of the interdisciplinary research group Poesis XXI at the Higher Academy of Art in Bogota, Colombia, and chief editor of the journal Calle 14: revista de investigacion en el campo del arte.