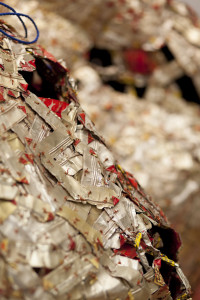 “(…) the work brings the ethical and political concerns of the environment, consumerism and waste into view. It suggests that we pay attention to the meanings, limitations and possibilities of recycling, without being didactic and heavy-handed (…).

Yvette Greslé on ‘the wall hangings’ of El Anatsui.

FROM WASTE TO ART

Found materials, aluminium bottle-tops, are transformed into sumptuous surfaces, fabrics with color form and texture. The banal and everyday materials of consumerism and consumption, so readily discarded and forgotten, are re-imagined as extraordinarily beautiful and sensate objects.
This solo exhibition of selected works by El Anatsui brings together a collection of wall hangings made between 2008 and 2014, and examples of the artist’s earlier wood sculptures from the early 1990s. The October Gallery has worked with Anatsui since 1993, following his experimentation with sculpture, and the emergence of significant shifts in his practice. His first solo exhibition in the United Kingdom took place at the gallery in 1995. Titled El Anatsui: Reliefs and Sculptures, the show focused on ‘eighteen wooden wall-hanging sculptures surrounding a large central tree trunk, ruthlessly carved with a chainsaw, its compromised outer surfaces still richly ornamented by the persisting traces of African symbols and scripts. Debris lay strewn around the standing tree-trunk’s base’. [1] One of Anatsui’s wood sculptures, titled Monument (1996) was loaned to the British Museum, by the October Gallery, for the BBC’s Ground Force Africa Garden in 2005. [2] His wall hangings have been exhibited on the exteriors of buildings, and are monumental in scale: Fresh and Fading Memories, Part I-IV appeared at the Venice Biennale in 2007, and was suspended across the façade of the Palazzo Fortuny. TSIATSIA – searching for connection was hung on the façade of Burlington House at the Royal Academy of Arts, in London, during its 245th Summer Exhibition in 2013. The piece, made for the RA, was over 4000 square feet. 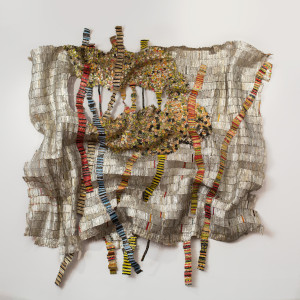 Anatsui is an important figure within internationally orientated conversations about late twentieth century, and current art practices. Both a sculptor and a teacher, he was Professor of Sculpture and Departmental Head at the University of Nigeria, Nsukka. He was born in Ghana in 1944, and re-located to Nigeria in 1975. In 2011 he retired and now lives and works between Ghana and Nigeria. He is an influential precedent for younger generations of artists, and notably mentored Nnenna Okore (born 1975). Her sculptures are attentive to found materials, the transformation of discarded materials and textile-focused practices such as weaving, sewing, dyeing and waxing. [3] In a 2014 Art Basel conversation between Anatsui, curator Yvette Mutumba, and Bisi Silva (the founder and director of the Centre for Contemporary Art, Lagos), Silva spoke of following the artist’s work for over twenty years, and notes their shared location in West Africa and in Nigeria while they also both work internationally. [4] This is a significant aspect of contemporary histories of art and criticism no matter where in the world one is located. Of importance here is the negotiation, without perpetuating assumptions and stereotypes, of historical and geographical specificity and the now commonplace practice of living, working and travelling across continents and borders. Terry Smith makes important critical points about African artists and art practices in relation to international art circuits. [5] He counters tendencies towards preconceptions about an essential African-ness, which I have observed in aspects of western art criticism: ‘Whatever the genre, or mix of genres, in which they work, each [artist] is alert to the complexities of life in changing times not just locally but globally’. [6] He continues: ‘It is this that decides the “authenticity” of the work, not an external judgement as to whether it appears to embody an essentially “African” spirit or to be made from distinctively African materials’. [7]. Anatsui comments: ‘The world is beginning to realize that artists are just artists; not “European artists”, not “African”, nor “American”. Art is not the preserve of any one particular people; it’s something that happens around the whole world.’[8] 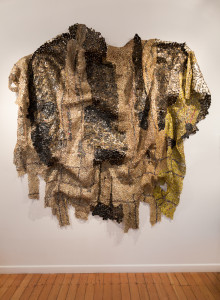 Close-up, the wall hangings reveal an intricate process of construction: Anatsui’s now familiar and painstaking practice of recycling and transforming bottle tops, which are flattened out, and then woven together with copper wire. These richly colored, metallic fabrics are suspended from wall surfaces where they register folds and drapes reminiscent of textiles. The material of the bottle tops, re-worked in Anatsui’s sculptural fabrics, suggest shimmering dialogues with the light that falls on them. In this presentation they appear as richly colored, luminous presences. They are visually immersive and affective opening up a ‘coloring of our whole being’. [9] Smith writes of their ‘colorific splendour and rich tactility’. [10]. Susan Vogel reflects on the work shown at the Royal Academy, which: ‘Seen from afar […] are opulent creations of glittering splendour’. [11] In my immediate experience of them, from a distance, these wall works are transformative, sites of wonderment and pleasurable contemplation. But they also open up conversations about the materials from which they are constructed, and the relationship of these to environmental concerns and politics.

Standing in close proximity to the wall hangings, the artist’s source of the aluminium branded bottle tops are visible, meticulously flattened out, and organised into different colors, shapes, widths and lengths which come together to form the richly textured and colored surfaces we observe from a distance. I note: Bosotex International, Romatex Distillers, Castello, Black Gold Whiskey and so forth. These names and the visual language of branding, with its logos, typographies, colors, gold, black, red, yellow, blue, invite an excavation of the desires, memories and social-economic exchanges they imagine. Vogel observes: ‘By a careful adjustment of distance – it’s almost possible to enter into a liminal zone, balancing the fabulous wealth of luxurious sculptural forms against the brazen stridency of crude, hard-sell branding’. [12] Anatsui describes how he came across the materials of the bottle-top, telling us something about his process, his intimate relationship to material substances and forms, and his studio practice:

The whole process started with my having discovered empty drink bottle-tops in the wilderness. I thought that something could be done with them, so for some time I just studied them. Finally the idea came that these tops are very soft; that it’s easy to rip them apart and flatten them out. After stretching them I felt that the best thing would be to put them together in series to make a sheet, to play down their petty individuality by welding them into a massive block. That’s how it all started. Now, the process is a very laborious one. First of all you are ripping and stretching and making holes in the ripped pieces, and then carefully sewing them together in sections, and after some time you bring them together into larger blocks so as to study them before beginning to piece them together at a larger scale. [13] 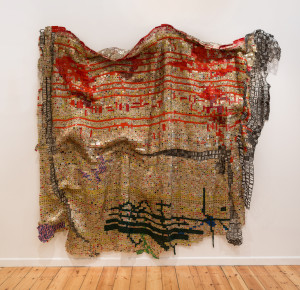 Vogel reflects on this narrative, and Anatsui’s famed ‘discovery of three bags of bottle-tops’, noting: ‘While the liquor bottles could themselves always be sustainably recycled, no local manufacturing plant was capable of recycling aluminium’. [14] The wall works bring into the sphere of art, and its various exhibition spaces and sites of discussion, the detritus of capitalism, its excessive production of waste, deposited into natural and urban environments, and the cacophony of brands which compete relentlessly for our attention. El Anatsui’s practice opens up multiple points of entry, each of which is important and inter-related. The wall hangings make visible the process and the pragmatics and craft of construction. They register the sensate and affective significance of Anatsui’s sculpture and his interest in formal concerns with color, texture, materiality, form and space. Simultaneously, the work brings the ethical and political concerns of the environment, consumerism and waste into view. It suggests that we pay attention to the meanings, limitations and possibilities of recycling, without being didactic and heavy-handed; there is a politics to Anatsui’s encounter with the bottle-tops, and his transformation of them into art objects which are part of everyday life and experience, and sites of creativity, thought and feeling. These works bring the sensate capacities of art into a dialogue with environmental ethics.

Yvette Greslé is a London based research associate. The Research Centre, Visual Identities in Art and design, Faculty of Art, Design and Architecture, University of Johannesburg. She is a freelance writer and art critic