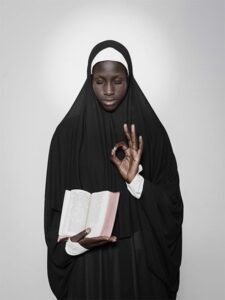 Photography has always been of great importance, from the first postcards produced in colonial times that were major tools for racial propaganda to the proliferation of local studio photographers like Seydou Keita in Mali and Mama Casset in Senegal that gave early-twentieth-century Africans the opportunity to choose how they were represented

Of Djinn and Man: A Conversation with Fabrice Monteiro

Born in Belgium, raised in Benin, and based in Senegal, Fabrice Monteiro’s work occupies the highly charged synapses between formal portraiture, photo-reportage, and fashion. He has gained worldwide recognition for his ongoing series The Prophecy, in which spirits of the Earth appear to humankind adorned in resplendent trash to deliver a message of warning. 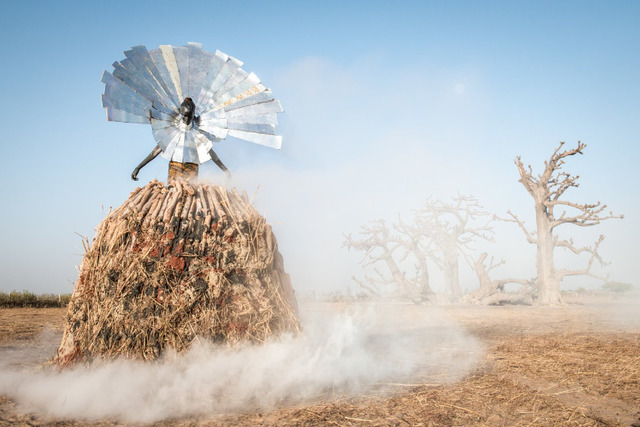 Your work is often associated with Afrofuturism—especially your Prophecy series—but you’ve said before, “I’m not so much interested in the future.” And then, the curator of your solo show at the Chazen Museum remarked, “the djinns offer no solutions,” which would seem to elude the Afrofuturist project of envisioning a better world.

It seems to me that if, as an African artist, my work even vaguely suggests a Western idea of science fiction, it automatically becomes Afrofuturist. I am more interested in the evolution of a continent since its brutal encounter with the so-called civilized world. We have to take stock of the past before we can project ourselves into the future. It’s becoming more and more obvious that the paradigm that was offered to humanity isn’t viable. The future is now. The djinns offer no solutions, but they make humankind confront its responsibilities.

You were trained as an industrial engineer before pursuing a career as a fashion model. The hauture aspect of The Prophecy series is salient – but these shots must also be feats of engineering.

You do many different things that don’t seem to be connected and then one day you realize that every little experience you’ve had comes together in your creative process. Preproduction is a huge part of each Prophecy. From research to financing to realization, each image takes three months to a year. A lot of the sites are difficult to access and building an installation on location is always a challenge. The actual shooting is comparatively fast since by that point I know exactly what I’m looking for. 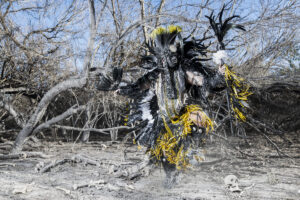 What about your latest Prophecy which you posted on your Instagram [@studiofabricemonteiro] just last month? I imagine that many of your followers were surprised to see the hashtag #texas.

In my quest to include as many indigenous cultures as possible in the project, I came acd to ross an environmental and cultural tragedy taking place in Eagle Pass, Texas, just a few miles from the Mexican border. Dos Republicas is an open-pit coalmine that has been running since 2013 despite opposition from many local residents. The operation has polluted water sources, threatened wildlife, and destroyed over a hundred archaeological sites on the ancestral homelands of many native peoples. And then, the coal is transported to Mexico where it’s burned in one of the dirtiest power plants in the hemisphere. The performer in the image is Larry Yazzie, a dancer from the Meskwaki and Diné nations, and it was produced with support from Rice University. My main goal now is to finish the Prophecy project that I started in 2013 and make it a universal tale addressed to all of humanity.

You’ve said that relations between Africa and the West “constantly fluctuate between attraction and rejection, empowerment and denial, recognition and anger.” How did you experience and explore these tensions as part of the Seeds for Future Memories exchange between Senegal and Italy?

During my residency at Villa Romana in Florence, I couldn’t stop thinking about the story of Leo Africanus, a Berber diplomat who was captured by pirates in the Mediterranean in 1518 and presented as a gift to Pope Leo X. Leo Africanus would end up writing the era’s most authoritative geography of the Maghreb and the Nile Valley. And then, while I was there, a Senegalese street vendor named Idy Diene was murdered by a Florentine named Roberto Pirrone. He left his house with a gun intending to commit suicide but decided instead to shoot any passerby. He first pointed his gun at a mother with a child but didn’t pull the trigger. He then saw Idy and shot him three times. That event was followed by protests with thousands of people in the streets. So, I invented a character, Idy Africanus, to become immersed in the scene.

Your acknowledged mentor in photography, Alfonse Pagano, is well-known for his 1999 photobook Dreads, which “rejoices in the essence of the individual, set free by an organic explosion of hair.” Did that series have a particular impact on your work?

Years ago, I started a t-shirt brand with a few friends from Benin and Dreads was one of my inspirations in creating the graphics. A few years later, I met Alfonse while surfing in the Dominican Republic. We became friends and through our conversations I realized that he was the author. He found me a place to stay above his apartment in New York City and gave me access to his studio. He told me that all I needed to know about photography was ISO, aperture, and shutter speed—the rest was all up to me. And then I dove in.

In your black-and-white portrait series The 8 Mile Wall, you employ the tropes of blackface minstrelsy and formal portraiture to trenchant effect. In Évolué, the subject has the exaggerated white lips and white gloves of a vaudeville performer like Al Jolson or Bert Williams, but he’s solemnly posed next to a plinth with a severed black hand under a glass cloche. What’s going on here?

When the Congo was a Belgian colony, there were two categories of Congolese: the indigenous and the évolué. The évolué would adopt European dress and manners and would hold clerical positions within the colonial administration. Under the black hand, there is a year engraved: 1884. That was the beginning of the Berlin Conference, during which Africa lost a hand in its own destiny as arbitrary borders were drawn up by European powers. This series invites viewers to question the construction of racist tropes from the eras of European colonialism and Jim in order to decolonize the mind. 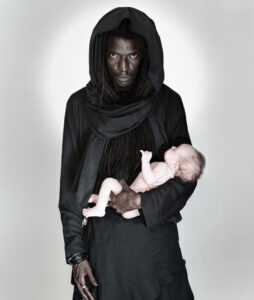 What about your appropriation of a much more ancient trope—the Hodegetria, “the one who points the way?” What is your reimagined Hodegetria pointing toward?

It’s the same concept as in the 8 Mile Wall series—it invites viewers to reconsider these kinds of representations that often don’t pass through our filter of reason. Growing up in Benin, I was always fascinated by the sight of hundreds of black men, women, and children bowing down to a pink Jesus. What could be the effect of such an act on our self-concept? 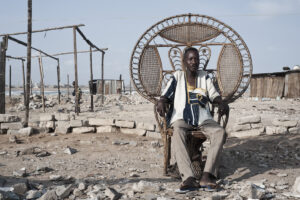 There seems to be a continuous aesthetic thread that runs between your formal work that we’ve discussed and your documentary series like Placodji—which memorializes a demolished oceanside district in Benin, and Into the Arena—which glimpses into the world of traditional wrestling in Senegal. There’s always a careful attention to the idiosyncratic, lyrical forms of the natural and built environment, and a real sense of latent power in all of the human subjects.

I think my photography is very much influenced by my years of modeling—composition and posture are key elements. When I decided to come back to live and work in Africa, my main objective was to avoid miserablism and use my experience in fashion photography to project a strong image of Africa and Africans. When you photograph someone whose house was destroyed by bulldozers the day before and has to live in the ruins because he has nowhere else to go, you’re capturing the immeasurable resilience that Africans have.

You’ve commented that “in Africa it’s not easy to take pictures,” though I know that Senegal has a dedicated museum of photography, MuPho, where you’ve exhibited. What would you say is the state of photography in Senegal and Africa?

Photography has always been of great importance, from the first postcards produced in colonial times that were major tools for racial propaganda to the proliferation of local studio photographers like Seydou Keita in Mali and Mama Casset in Senegal that gave early-twentieth-century Africans the opportunity to choose how they were represented. Now, there’s a whole new generation of photographers on the continent that are revisiting that heritage and bringing the conversation to new levels. I believe the future of African photography is bright—there’s still so much to explore and the medium is becoming more and more accessible. And with all the biennials like Bamako Encounters and Lagos Foto Fest, it seems that African collectors are getting more and more interested in photography. But the approach to photography is still very culturally specific. It’s very hard to do street photography in Benin because of Vodun culture—with my very first formal series, Marrons, it was very difficult to convince people that the portraits I wanted to make were not for the purposes of witchcraft. Meanwhile, Senegal has a long tradition of street photography, especially on the beaches, so I didn’t have any trouble making my Gorean Summer series there.

One last question—just to reenter the cognitive province of Afrofuturism for a moment—if you were invited to participate in a seven-year residency on Mars and could only take one book, one album, and one film for inspiration, what would you pack?

The book would be 1984, for its visionary approach—“War is Peace, Freedom is Slavery, Ignorance is Strength” is a lot of food for thought on Mars. For music, Ali Farka Toure and Ry Cooder’s Talking Tibuktu, because Malian blues heals the soul. And for a movie, The Party starring Peter Sellers—because you need a good laugh sometimes. 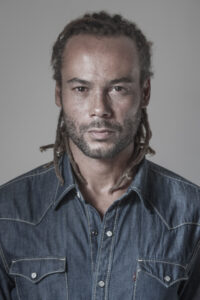 Evan D. Williams is a writer from the US, specialized in contemporary art and poetry.

← Dineke Blom – Dutch/Surinamese – and her affection for Dutch paintings from the 17th century
Musa N. Nxumalo: Hashtags as Signpost of Power →