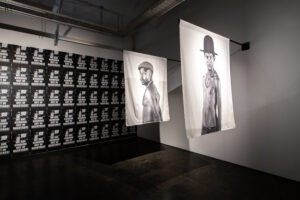 Nxumalo’s exhibition was an exercise in how the black male body seeks to find a form of redemption in a culture that is gluttonous with representation and its capability to take voice and power from its subject.

Themba Tsotsi on the work of Musa N. Nxumalo

Installation view We are running out of hashtags, SMAC Gallery, 2020

Hashtags as Signpost of Power with Musa N. Nxumalo

Social media as an arena where the photograph has become a spectacle has come to embody a discourse of the power of representation beyond the news, journalism and film culture. Musa Nxumalo’s exhibition that ran at the Smac Cape Town Gallery, was a show that dealt with the issue of representation by representing and celebrating platforms like social media as shrines that have assumed ideological power connotations in relation to their subject matter.

*
Nxumalo examined the black male body as a subject matter that relies on social media platforms as lenses through which the hashtag is becoming a social phenomenon that occupies the collective psyche with ambiguous connotations. 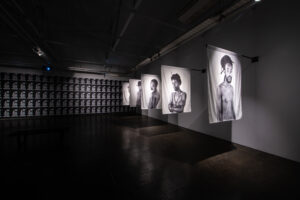 Installation view We are running out of hashtags, SMAC Gallery, 2020

The show was titled We are running out of hashtags. It featured the Johannesburg based photographer’s new works, which are consistent with his dark film noir finished impact that emphasise the tone of his subject through black and white film.

*
The article will demonstrate how photography implicates social media as a vehicle for voyeurism that the black male body is a sign for contested power beyond the body and this is related to how hashtags are assuming a symbolic function in the culture as a measure of contesting against and aligning with the status quo. It will demonstrate that the artist is conscious that the location and role of the audience is important for the objective function of both the hashtag and the subject matter. In order to make possible a conversation about ideological power that compares the subject matter and social media platforms as vehicles that are supposed to be inclusive and not in contest with each other.

*
To demonstrate contesting and aligning are possible on the same platform requires an examination of the subject on the particular platform as voiceless and unable to represent itself. This way notions of power can be related to the political and capitalist measures that drive social media platforms as easily available arenas. 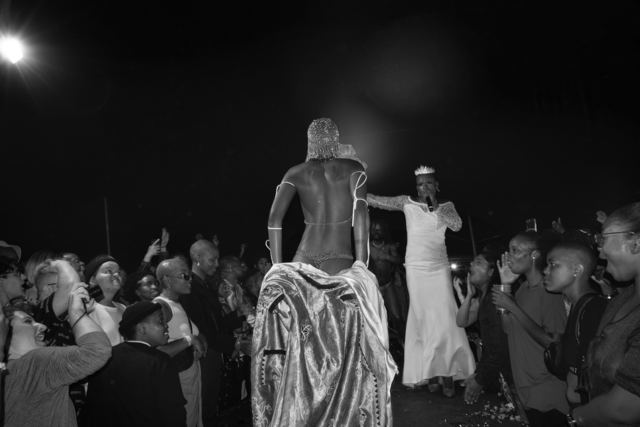 The piece titled 10!10!10! for example demonstrates the extent of this gluttony of representation, given like the judges score in a beauty contest the participant’s image taken from behind. The artist with this image is making a statement about the accumulating anonymity on social media platforms themselves. The ambivalence is embedded in the process of acquiring a social media account, presence means both alignment with the capitalist ethics and content constitutes the combative language that hashtags have come to be associated with. By incorporating the audience in the image, the measure of voyeurism as a social lens is pronounced, social media as a cultural mechanism frames the black male body as either voiceless or desiring voyeurism. The audience occupies the symbolic location that social media as a mechanism has, it helps with the narration of the black male as a spectacle.

*
Incorporated in the installation of the exhibition were street style posters that fit a wall in the gallery space. The posters incorporated the title of the exhibition, the overt marketing connotations spoke of the accumulating function of the social media platform diminishing the weight of the content and the subject matter it provides a platform for. Presented in black and white, in a dark and murky space, the artist created that kind of atmosphere to make a statement about the desire and effort to be part of the conversations on these platforms.

Nxumalo also created a moment which demonstrated how the pop culture ethics of the consumer and easy access are deemed to be peripheral on social media platforms to be farcical. These ethics are diminished as content with political or revolutionary connotations, including the capitalist drives as moral imperatives. The artist then demonstrated these ambiguous ethics to be the subject and content of hashtags as social shrines or “flags” for politically discourse. He demonstrates that hashtag and the subject function together and are dependent in each other.

*
The photograph in Nxumalo’s work is the frame that seeks to liberate the politics of representing the black male body from the media. Popular media rely on colour images to send out its discourse of power and powerlessness. The artist relies on the power of the photograph to be choreographed, while in the media as in journalism, the image has the impact of pronouncing the oppositional ethics between the status quo and what is revolutionary. 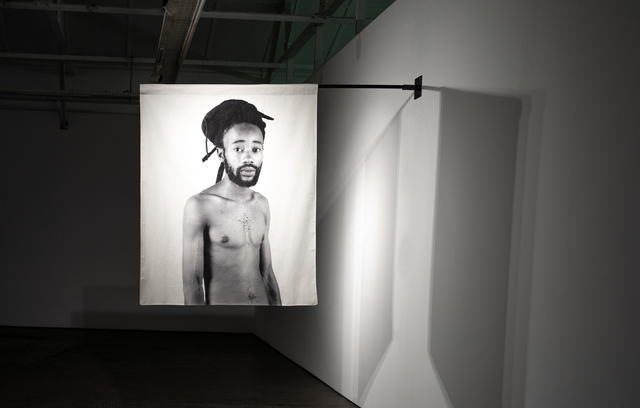 This partly continues the strategies from his previous collection The Story of O.J. after 4:44 where portraiture and the drama of black and white images relate the audience through the identities of the subjects by creating discourse through their skin. Nxumalo relies on the symbolic function of the form of the camera’s frame to represent the formalism and casual nature of social media and its subjects. 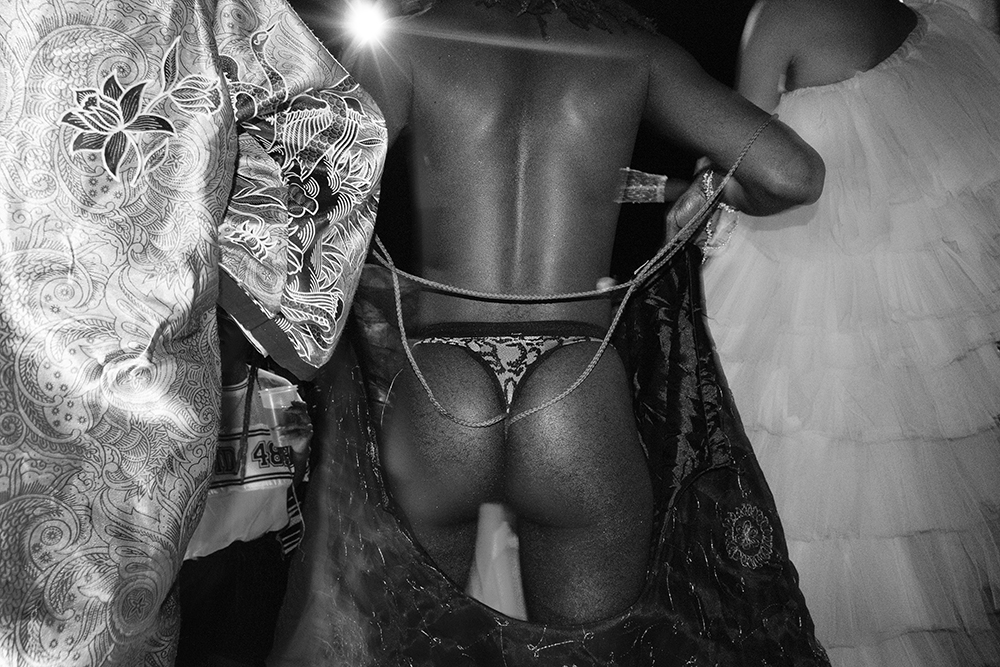 He continues with this strategy through the piece titled Gyre, another image of the subject taken from behind in the current collection. Taken from the back it not only pronounces how the body is framed it also speaks the function of form that racial science and anthropological studies of migrant labourers underwent early in the twentieth century. This image Gyre is just like 10! It is an image of the subject in transition, whether this happens on stage or behind the scenes, Nxumalo makes a statement about the black male body and the extent he cannot control how he is represented. It is also a statement that the social code that the hashtags functions with frames the black male body with voyeuristic connotations. “Gyre” and “10!” are pieces that discourse how the body as a spectacle is constructed asking the questions, from which angle, from which social perspective. This way the black artist and the black body are not only conscious of these politics of representation, but their function as a moral imperative provides the tools to re-examine them through art.

The pieces that were incorporated in the show also featured images that captured the audiences’ perspective. This way the artist placed himself in the traditional journalistic perspective. Like the photograph Untitled , audience members looking at the camera, some reacting to the show, articulated the organic implications that the social media hashtags have come to be imbued with. It also pronounced the ambiguous connotations both participants and audience occupy in the cultural arena beyond social media. With this image the function of photography to be objective can be discerned, unlike in the context of social media where objectivity is the initial springboard of a particular discourse then opinions separate alliances. The photograph frames objectivity, even though this might be through the limitation of an image, it allows for the body to be examined in its element if the context is organic, or it allows the body to extend how it is represented through choreography. Unlike through the journalistic perspective, where the image speaks to a particular power. “Untitled” is a piece that incorporates the voice of the subject by capturing the audience as that which depends on the subject for meaning.

Nxumalo’s work included in NIRIN, the 22nd Sydney Biennale curated by Brook Andrews, in Sydney, Australia. In 2019, Nxumalo’s work was included in SMAC Gallery’s presentation at 1-54 Contemporary African Art Fair at Somerset House in London as well as the group exhibition Crossing Night: Regional Identities x Global Context at the Museum of Contemporary Art Detroit, USA in late 2019. Nxumalo recently presented work at SMAC Gallery’s group presentation at the Investec Cape Town Art Fair in Cape Town, South Africa.
We are running out of hashtags was imbued with the drama that black and white photographs are characteristically infused with. Having incorporated images from his The story of O,J, after 4:44 series, the body was provided facilities to be examined both when it is immobile and when it is mobile. Nxumalo’s exhibition was an exercise in how the black male body seeks to find a form of redemption in a culture that is gluttonous with representation and its capability to take voice and power from its subject.