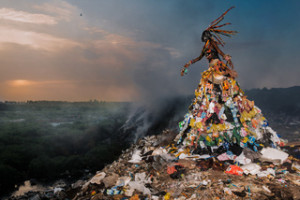 Fabrice Monteiro (born in 1972 in Belgium, lives in Dakar) is an emerging artist based in the fields of photojournalism, fashion photography, and portraiture. Born to a Beninese father and a Belgian mother, his childhood is nurtured with multi-cultural. His unique signature style revolves around his passion and love for the heart and the people of his country. Monteiro was not predicted to become a photographer. Photography came naturally to him, first as a professional model, he became aware of the complexity of the composition, the lighting and the posture. Traveling the world inspired him to develop more creative projects, Monteiro was not destined to become a photographer, photography came to him. 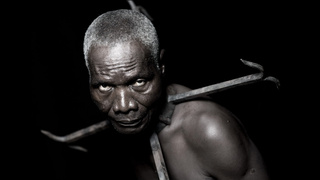 From the series ‘Marrons’.

Fragments from an interview in the magazine AERE VIEW, August 2013.

I’m half Belgian, half Beninese, I’m 40, I grew up in Benin until the age of 17, classic story: I went to Belgium for my higher education. During my studies I had a great opportunity to work as a model, it was good and fast and I did that for 10/12 years, travelling all around the world.

That’s how I shaped my eye for photography: training through fashion photography. That’s why my current work is very fashion oriented. When you model, you spend days waiting, watching people pass you by. I had the opportunity to work with wellknown fashion photographers and I gradually accumulated  technique skills . In 1997 I met a New York photographer who got me a plan where to live above his apartment in NYC.

I was in Dover Street, in East Manhattan along the Brooklyn Bridge, his studio was two floors down and I spent so time there with him, I could play with his photography equipment and I started taking pictures.

1) What inspired you to start with photography, and what was your first picture?

As I began with fashion, I approached photography by testing models in NY, editorials here and there, when I finally realized I didn’t really care about it. It was not exciting for me! Of course a nice consumer picture is cool, is cute, but once you’ve seen it, you immediately forget it.  I needed different meanings in photography and the best way where to start was about what I am.

My name, Monteiro, is a Portuguese name which I inherited from my ancestors,

who were deported during slavery to the islands by Portuguese, and gave that name to all their descendants. My father told me about my genealogy history, so I started working on slavery. When I was little I read «Les Passagers du Vent de Bourbon», a magnificent story of a slave ship which departs from England to the coast of Benin, retrieving slaves again. So the illustrations were all about what really happened in Benin, especially in Ouidah, the town where I grew up, which was an important slavery centre – and it was exactly what I was used to see in my everyday life. 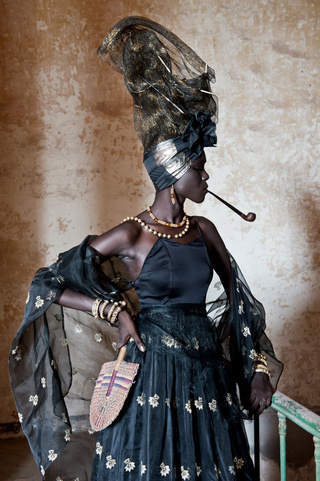 It was all in this book and it was the first time I approached to something like this: they used chains to bind slaves, especially spiked collars. My parents kept the book in the library, I was 9 or 10. These faces were so familiar to me that I felt personally involved because they had faces of Benin, I could perfectly see it, it marked me and I got the point: it was my first personal work “Marrons”, a portrait gallery.

I made researches at the «Quai Branly» in Paris, and reproduced five collars with all the information I could find on slavers notes or newspapers to make them closer as possible to reality. I created some 3D models and I crafted them when I went to Benin in January 2010. Then I did a street-casting with a sort of traveling studio: I photographed common people who I recognized, close to the image I had in my mind. So I made a portrait gallery about shackles too.

I consider myself as trans-cultural. My ass sits on two chairs: African father, European mother, both African culture and Western’s. It’s the Ariane’s thread in my photography.

Even if I had a first fashion approach, now my issue is African: I do not want to portrait markets or floods, I want something modern. I do not want to imitate Malick Sadibé, I give something else, straightly connected to what I am. 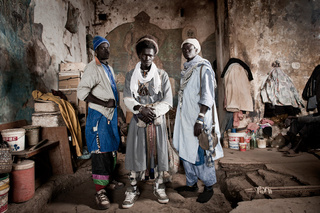 The Way of the Baye Fall.

2) How did you first approached photography,digital or analog?

I started with the digital, then I went back to school. In 2011, I afforded a year of Photojournalism in Brussels where I had the opportunity to discover what analog photography is, what films and development means. And I loved it. Unfortunately it is very difficult to work with silver color in Dakar, mostly because of temperatures.

On the other hand is easier to deal with black and white. I use directly the silver, which results richer than digital.

3) Which kind of camera do you use? Is there a reason for your choice?

I’m not a traveling photographer. I’m not interested in taking pictures while walking or pictures of shows. I’m not into this perspective. I prefer to design images in my head and then build my medium based on the concept and result I want to get.It’s all my head: once I’ve kept the concept, I take my camera and shoot the photo.

I have a brand new Mamiya, medium format Mz. The case is super heavy but with black and white portraits is fabulous! 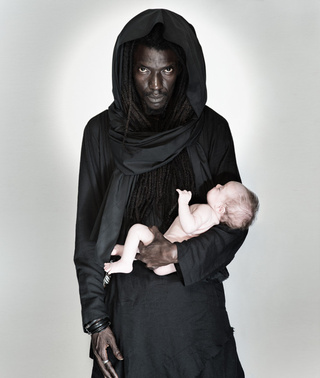 4) If you could build your own camera, how would it look like?

To be honest I would go to the opposite direction. Today with Japanese increasing technology, even by chance you can shoot beautiful pictures. Perhaps we lose interest in photography in the meaning you can make a picture by accident. In the past, if you did not know the technique, how to read the light, how to set your device, you couldn’t get a nice picture. It was all about basics.

So I would rather suggest to go back in the days. I started with digital, which is good: you take fifteen photos, you do change your exposure, you take the light you want. In the past  there was no opportunity to make lots of pictures because the material was very expensive. We had to be super accurate in our calculations. Today you can approximate, shoot “more or less” and than fix you photo! I do not want to change the world but I realize that the more I grow, the more I appreciate these old devices: when the film costs 6€, you claim the best and this means you have to rack the brain!

5) From which artist or photographer you get the inspiration?

If I had to choose one personality who inspires me it would definitely be Caravaggio.

Chiaroscuro is the pinnacle of a good light reading. And I love the atmosphere, lights and shadows, dressed with shade and dress with light. If I had to choose one photographic technique, it would be the chiaroscuro. 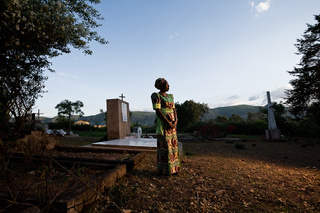 6) What is for you aesthetical?

I think there isn’t aesthetics without content. A picture can be beautiful with a perfect model and the lighting… but there must be something beyond this. Even when I do a fashion spread, I need content. For example the series on Black exploitation I presented at the Dakar Biennale.

When I arrived in Dakar, I found some buildings that recall an atmosphere of 70’s cinema, so I wanted to produce a series of “Made in Dakar”, inspired by Black exploitation, an African-American movement. It spoke to me, fashion under that point of view it felt and interesting topic.

Like the project we had with Bull Doff (Senegalese fashion Creators) about Tales & Legends. The fashion aspect can be interesting if you put them in a local context, with new interpretations and a mix of cultures. So we took Tales Characters, like Le Petit Chaperon Rouge, Aladdin, La Belle au Bois Dormant, Le Daour, Le Baron Samedi… From Africa, Europe, Caribbean… In a local, non-artificial context, with a cultural clash and African-oriented fashion Aesthetic.

7) What is for you the photographic emptiness? Have you ever felt any doubts of fear to photograph something?

Returning to school, I’ve learned one thing: the “street photography”. Read people through photography, knowing that somehow you are voyeur although the device between you and the model gives you some legitimacy to be a voyeur. The fact of having a school of photojournalism has taught me to do that and accept it. For several years I have been working on the beaches of Dakar.

A beach is a place where all the taboos of society disappear, within a moment. During the winter there to really crowd descends on the beach, a kind of crucible fabulous! You see things that you do not usually see in the African society. It does not interest me to photograph the woman who sells room with his head scarf, or the kid with the snot nose. As against what interested me was the affection, the man-woman relationship, the gesture… I realized that the only place I could find it, it’s at the beach. There are no more hierarchy.