How Far How Near: Stedelijk Museum Amsterdam 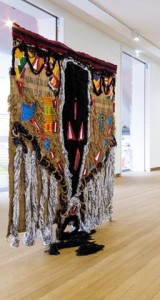 How Far How Near
The world in the Stedelijk

Classic and newly acquired works from the collection.

This exhibtion argues for a greater emphasis on art from regions outside Europe and North America, with the collection of the Stedelijk as a starting point. Prompted by a number of recent acquisitions of work by African artists (including Godfried Donkor, Dorothy Amenuke, Meschac Gaba, Abdoulaye Konaté and Billie Zangewa), the exhibtion centers around the key question of how museum collections and exhibtition pilicies historically and today are limted and challenged in relation to geographical emphasis.

How Far How Near shows how the works in the collection of the Stedelijk can stimulate new dialogues, says director Beatrix Ruf.

The works of Donkor and Van de Ven (not reproduced here) are made for this occasion.

During the exhibtion period there will be several debates presented.
See for detailed information www.stedelijk.nl 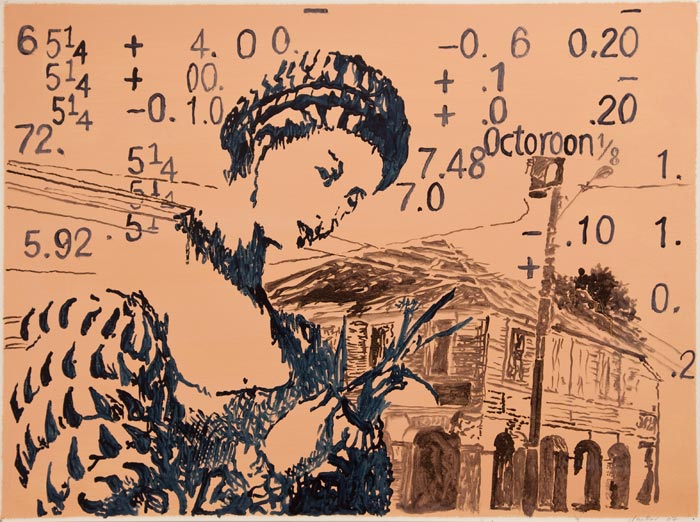 (article from Financial Mail, Januari 23, 2014, written (and copyright) by Mathew Partridge)
WHEN the West African artist, Godfried Donkor, first visited Johannesburg almost two decades ago, the city felt a bit like a frontier town to him – “like something out of a cowboy film”. And like the original frontier towns, it has an allure for those seeking out new experiences and exploring boundaries and options outside the obvious.
Donkor has regularly returned to the city, which to him represents a perfect junction between the vibrant, bustling African continent and the more colonial Europe. “It’s the closest I can get to Africa and Europe, so that’s why I keep coming [back].” Though born in Ghana, Donkor has lived in London since he was eight. Despite regular trips back to Ghana, he has established a special relationship with Johannesburg, which he describes as the “meeting of two worlds”.
He is standing at his stove, cooking midday scrambled eggs, as he talks about the tribulations of living between two continents. He is back in this “frontier town” as a visiting artist for a print residency and collaboration at the David Krut print studio. Donkor, who has shown at international mega exhibitions like the Venice Biennale among others, first came to Johannesburg in 1994 on a stopover during a trip to Botswana. His first real experience, however, was in 1997, when working as a curatorial assistant for Okwui Enwezor on the second (and last) Jo’burg Biennale.
Back then, as SA was but a fledgling democracy after years of international isolation, the country wasn’t that up to date with the display mechanisms of contemporary art. Looking back on that time Donkor says the infrastructure of the SA art world had no idea how to cater for installation artists. Playing a role in managing the logistics of an event that hosted 250 local and international artists, Donkor believes that the exhibition “changed the face of contemporary SA art because of the exposure to different kinds of work”.
Sadly the concept of the Jo’burg Biennale stopped after its second manifestation in 1997. Asked why, Donkor suggests that a cultural event on such a scale “takes enormous political and creative will”, adding that “art has not been understood by people in politics”. Suggesting that this trend is not necessarily unique to SA, he notes that “there is a fear of contemporary art and the unknown and it’s happening more all over, even in Europe”. 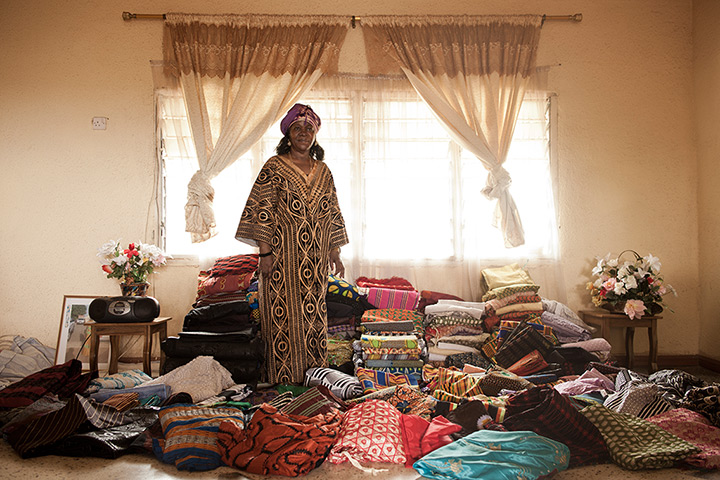 Art, says Donkor, is “not good for the status quo” and there is a tide of growing conservatism that is increasingly resistant to what contemporary art has to say. After 1997 Donkor didn’t return to SA for 10 years until another attempt at a biannual event, this time for Transcape held in Cape Town. Though the event again attracted a host of international artists, as with the Jo’burg Biennale it also had only two incarnations, ending in 2009, before it closed amid funding woes.
Exhibiting at Lookout Hill in Khayelitsha, included in Donkor’s show is his video installation Jamestown Masquerade. Set in one of the oldest districts of Ghana’s capital city, Accra, Jamestown is the site of 17th-century British and Dutch slave merchant buildings. In his Masquerade, Donkor dressed his troop in the style of 18th-century dandies and belles attending a masked ball.
The twist is that the fabrics and designs are distinctly African, but offset by the elaborate Venetian-styled masks worn by the performers. As the troupe perform a carnivalesque parade set against the crumbling colonial ruins of an African port, the viewer finds himself strangely conflicted as two worlds collide in what is a surreal and strangely futuristic experience.
This conflation of two worlds and alternating experiences is what defines Donkor’s production. In a sense he can be seen as a personification of the post-colonial subject; as an artist with roots on two continents, his work creates a dialogue between African and Western forms, not distinctly one or the other – it is instead a mash-up of elements that interrogates the movements between such spaces.
Two years after completing a painting degree at St Martins, he returned to London where he studied at the School of Oriental & African Studies, completing an MA in African art history, something that has greatly influenced his artistic trajectory. Attesting to this is the work he exhibited in Venice in 2001, titled Lord Byron’s Drawing Room, in which he explored the marginalised histories of Africans living in Europe. Using old prints and illustrations sourced from the British Museum, Donkor created an installation of images where black and white Victorian boxers square off while a racially mixed and rowdy London mob spurs the fighters on.
More recently Donkor’s work has taken the notion of the archive and adapted it to examine how commodities define everyday life. Using the Financial Times newspaper as his archival material, Donkor has made a series of international flags that are bleached of their national colours. Recognisable only by their physical shapes, the flags take on an eerie quality that speaks to the way people and nations “are managed and controlled through finance and money”.
Donkor says he wanted the flags to have a “real physical presence”. At 2m x 2,5m, the flags are indeed imposing, made of layers and layers of glued newsprint from the FT. Asked how he came across so much of the paper to construct the work, Donkor tells the story of how, after a friend’s husband who is a city broker in London connected him with the FT, “a truckload of paper” arrived at his studio. As the FT is slowly moving out of print, with digital platforms increasingly coming to define how we consume information, Donkor says the idea of the archive is becoming more and more vital. “We discard things because they are old,” he says. “But what does this do to how we understand value and commodity?” 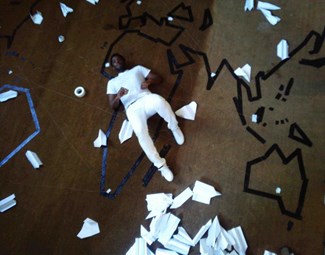 On the occasion of the opening of the exhibition How Far How Near: The World in the Stedelijk, the Public Program of the Stedelijk presents the performance A Village Called Gario, by Quinsy Gario.
This performance is actually less related to the Gairo’s personal experience and family history than the title might suggest; instead, it focuses on patterns of migration, both general and specific, which are relevant to family histories in different ways. Taking an existing village called Gario in the Central Republic of Africa as a point of departure, the artist tells the partly fictional, partly factual story of a global journey.The inspiration for this one-man performance comes from the travelogues of colonial explorers. Like them, Gario combines locally collected knowledge with imagined stories. 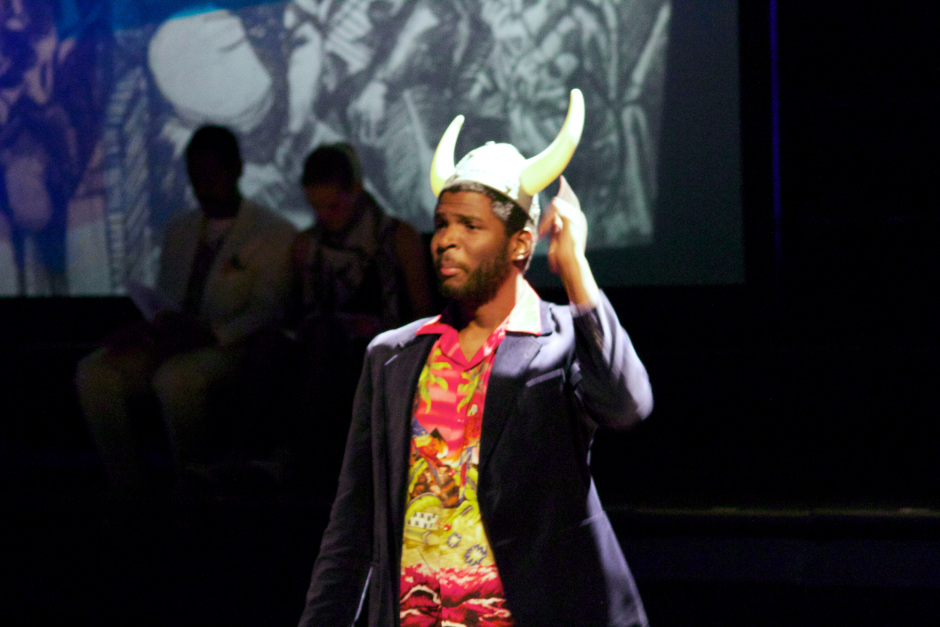 His work addresses topics such as migrations and the resulting rise of trans-locality, themes that are currently discussed in the exhibition How Near How Far. A previous performance of Gario, Zwarte Piet is Racism, had a broad (international) public debate as a result.
Quinsy Gario was born in Curaçao and raised in St. Maarten and the Netherlands. Under the pseudonym T. Martinus, Gario has self-published two poetry collections. He won the Hollandse Nieuwe prize for theater makers in 2011 and in 2012 he started his own radio show called Roet in het eten (Spanner in the works). His video work produced under the banner of NON EMPLOYEES has been shown on MTV Netherlands, and he is a member of the pan-African artist collective The State of L3. Group exhibitions include Galleri Image (Denmark); Museum van Hedendaagse Kunst, Antwerpen (Belgium); and SMART Project Space and Stedelijk Museum Bureau Amsterdam (Netherlands). He has performed in MC Theater (Amsterdam, Netherlands) and Ballhaus Naunynstraße (Berlin, Germany). In June 2014, Gario performed A Village Called Gario at MACBA, Barcelona.