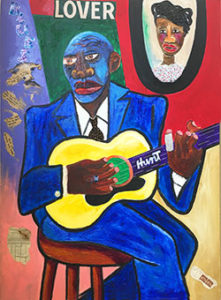 About:
George Hunt was born more than 60 years ago of humble beginnings, and over a lifetime of living, learning, watching, growing, creating and translating his visions into paintings, he has emerged as one of the most important African-American artist in the South. George Hunt has made a significant mark on not just African-American art, but American art as a whole.

Memphis artist George Hunt was born in rural Louisiana, near Lake Charles, and his grandmother noted early in life that he had a special power to “see things.” In addition to large doses of indigenous music, one of the things he saw was the civil rights movement and that experience became a painting in 1997, which in turn, became a US Postage Stamp issued in 2005 as part of the United States Postal Service series, “To Form A More Perfect Nation.” 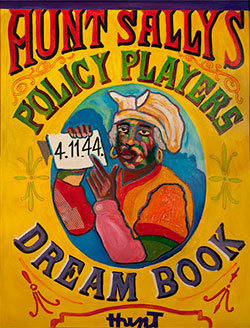 George Hunt was honored for his painting, “America Cares/Little Rock Nine” at ceremonies in Little Rock and Memphis. The painting was originally commissioned for the Central High School Museum, but first spent five years hanging in the White House in Washington, D.C. First Lady, Hillary Clinton, in a personal note to Mr. Hunt, wrote, “we are grateful that our visitors and staff have such a powerful image of hope and freedom to greet, inspire and inform them.”

In 2002, the U.S. Congress brought attention to America’s indigenous music by officially declaring 2003 as the “Year of the Blues.” George Hunt was named the Official Artist for the “Year of the Blues,” and he created a new body of work for a national tour. The exhibit, ‘Conjurating the Blues, The High Cotton Tour,” consisted of 26 large paintings that depicted the history of blues music in America. The title painting proudly hung in the grand lobby of Radio City Music Hall in New York during the opening tribute show for the Year of the Blues as Martin Scorcese filmed the documentary movie, “Lightnin’ in a Bottle.” The exhibit continued on to Seattle at Experience Music Project, Chicago, Memphis, Helena, AR (King Biscuit Festival) and Clarksdale, MS (Delta Blues Museum.) 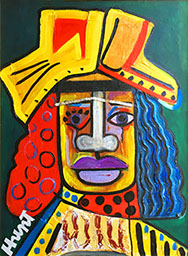 George Hunt appeared at great length in many segments of the 13-part “Year of the Blues” PBS radio series telling vivid stories of his experience with blues music, rooted deep in the rural south. Later in 2003, the Blues Foundation bestowed a coveted “Keeping the Blues Alive” award on George.

George Hunt spent his childhood in Texas and Hot Springs, Arkansas. After high school, Hunt attended college at the University of Arkansas, Pine Bluff on a football scholarship and studied art as a career. He did postgraduate studies at the University of Memphis and at New York University. Mr. Hunt spent three decades teaching art education and coaching at George Washington Carver High School in Memphis before dedicating full time to painting. He now works in a studio overlooking world-famous Beale Street. 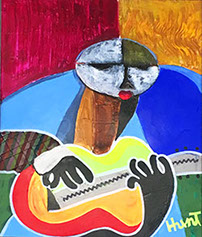 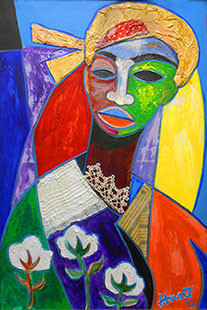 Ninety-nine percent of what George Hunt paints come from the Southern African-American experience, especially the folk tradition, civil rights movement, the mythic heroism of Black manhood, and of course blues music and culture. His mother-in-law owned a jukejoint in Helena, Arkansas called the Dreamland Cafe. There, George Hunt listened to blues legends like Sonny Boy Williamson and watched the patrons dance, drink, eat catfish, court, sport and score. The visions for George Hunt’s art have been steeped in the music and life passages of blues people.

Artist George Hunt has long been recognized as one of the top artists in the South and has also gained a national reputation through touring exhibits and shows from Seattle to New York…and Chicago to New Orleans. His first love is Blues Music which finds its way in to most of his painting. But George Hunt also creates incredible images about Civil Rights, African beauty and the rich history of African-Americans in the South. George Hunt paints with color and feeling. (text website artist)