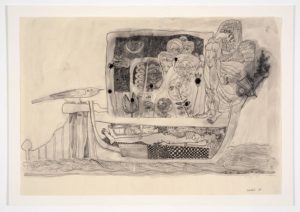 It is that moment in prayer

In silence we feel

Where things begin in His name

No more no less

This exhibition is a celebration of important black and white works spanning the career of Ibrahim El-Salahi, the Sudanese Oxford-based artist. El-Salahi is a visionary modernist who created a unique visual vocabulary and æsthetic that have come to define the modernist experience in Africa and the Arab world. This show travels on in part from his exhibition at the Prince Claus Foundation last year and will be the most comprehensive exhibition of black and white works to date, spanning the last seventy years. 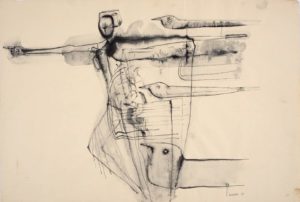 Beginning with El-Salahi’s seminal series By His Will We Teach Birds How to Fly (1969), the exhibition evolves spatially and chronologically, covering a range of the artist’s works from early calligraphic book illustrations, to his more recent notebook drawings. Sourced from the artist’s private collection many of these will be shown for the first time whilst others were exhibited in his major retrospective show at Tate Modern, in 2013 and more recently in his 2018 solo exhibition at the Ashmoleum Museum in his home town of Oxford.

By His Will is an early, landmark series embodying a mode of work, ideas and an aesthetic that underlie his larger oeuvre. It is testimony to his spirituality and passion for freedom and human dignity. Inspiration for this series came from a habit his father, like Ibrahim a devout Sufi, had of praying with his index fingers pointing outwards from his entwined hands, forming a shape that resembled the beak of the bird prevalent in El-Salahi’s dreams. The bird is a classic motif that recurs in El-Salahi’s work from the early sixties to the present, representing freedom, justice and also the artist himself.

In the late sixties El-Salahi talked of having ‘cut myself loose from all ties to any style I had embraced in the past, or to any current school in the art of the period. At the same time, I was unembarrassed about staying open to the fleeting inspiration of vision and spirit.’

It is these fleeting moments, apparent in this series and throughout his career, where visual images intermingle with visions and dreams that have inspired El-Salahi’s visual dramas and given vent to his artistic passions and emotions. In this El-Salahi shares a surrealist’s tendency to explore the unconsciousness and tap into a world of dreams and fantasies. 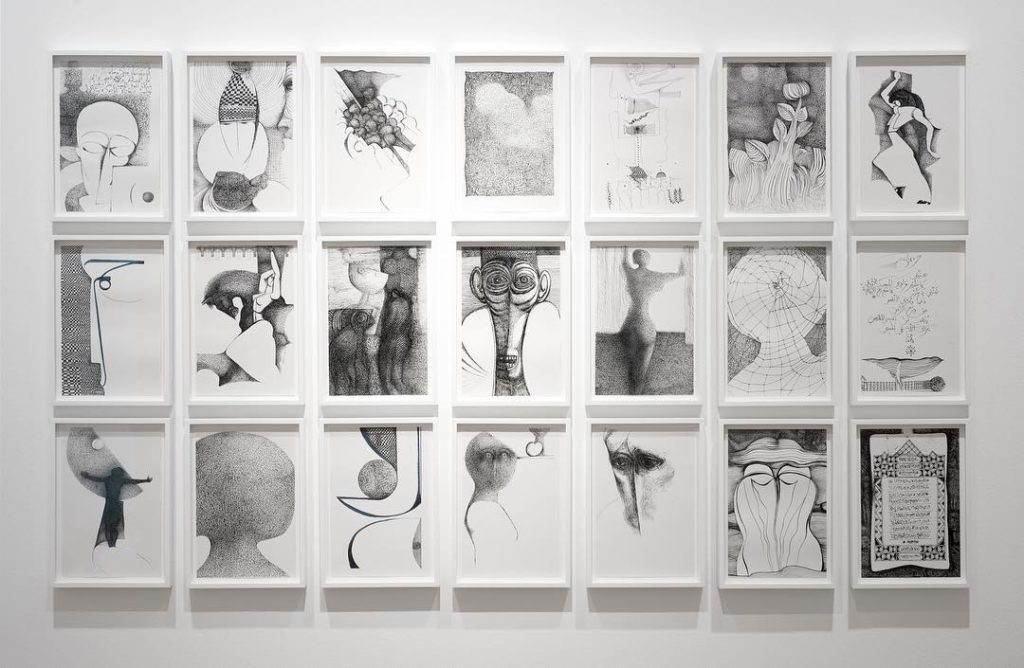 Earlier this year MoMA acquired El-Salahi’s Prison Notebook, one of the artist’s masterpieces and a pivotal work in the development of his creative process. The book facsimile has just been published by MoMA and Sharjah Art Foundation and is available to all. For six months and eight days during 1976-77, El-Salahi was unjustly jailed on political grounds and during this time of suffering and self-reflection we see the black and white works move towards an organic unfolding of dreamlike imagery, a flow of consciousness with him channeling a higher force. By necessity he could only use scraps of paper from cement bags used to wrap food and a small four-inch pencil he would hide in the sand. Only when the guards were not looking would he put them together to make the whole. This was an evolution, albeit initially forced, in the artist’s practice that has stayed with him to this day.

Many of El-Salahi’s most important works have emerged from similarly organic processes; either from a method of spatial growth where pieces of paper are added as the composition expands, or completed in notebooks where one drawing flows into the next. His latest black and white works, the Pain Relief series, some of which were exhibited at the Ashmoleum, are created on the backs of his used medicine packets, functioning as drawings in their own right, as well as templates for larger monoprint paintings on canvas. In this way they serve to realize an impact he still wishes to achieve but cannot through physical constraint. Working from his armchair, El-Salahi says he ceases to feel his pain when immersed in making these drawings and is, instead, free in the dreamlike realm of imagination and creation.

For El-Salahi, the act of drawing in pencil, pen and ink as his preferred medium relates to his interest in calligraphy and communication but also more importantly to the immediate, meditative and spiritual rendering of his ideas.

When asked recently what were his best works, El-Salahi just said the black and white and smiled.