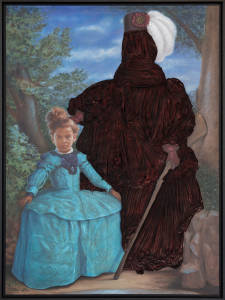 Titus Kaphar is an artist whose paintings, sculptures, and installations examine the history of representation by transforming its styles and mediums with formal innovations to emphasize the physicality and dimensionality of the canvas and materials themselves. His practice seeks to dislodge history from its status as the “past” in order to unearth its contemporary relevance. He cuts, crumples, shrouds, shreds, stitches, tars, twists, binds, erases, breaks, tears, and turns the paintings and sculptures he creates, reconfiguring them into works that reveal unspoken truths about the nature of history. Open areas become active absences; walls enter into the portraits; stretcher bars are exposed; and structures that are typically invisible underneath, behind, or inside the canvas are laid bare to reveal the interiors of the work. In so doing, Kaphar’s aim is to reveal something of what has been lost and to investigate the power of a rewritten history. 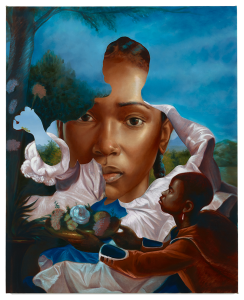 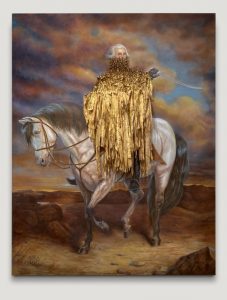 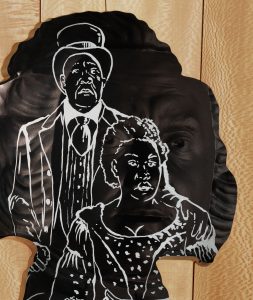 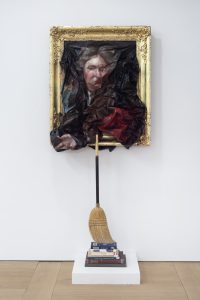 Titus Kaphar was born in 1976 in Kalamazoo, Michigan and lives and works in New Haven, CT. Kaphar received an MFA from the Yale School of Art and is a distinguished recipient of numerous prizes and awards including a 2014 Gwendolyn Knight and Jacob Lawrence Fellowship, a 2015 Creative Capital grant, a 2016 Robert R. Rauschenberg Artist as Activist grant, a 2018 Art for Justice Fund grant and the 2018 Rappaport Prize. In late 2014, Kaphar created a painting in response to protests in Ferguson, Missouri following the shooting of Michael Brown that was featured in TIME magazine. He gave a TED talk at the annual conference in Vancouver 2017, where he completed a whitewash painting, Shifting the Gaze, onstage. Kaphar’s work has been included in solo exhibitions at the Seattle Art Museum, the Studio Museum in Harlem, MoMA PS1 and the National Portrait Gallery in Washington, DC, among others. His work is included in the collections of Crystal Bridges Museum, Bentonville, AK; the 21C Museum Collection; The Museum of Modern Art, New York, NY; Brooklyn Museum, Brooklyn, NY; the Yale University Art Gallery, New Haven, CT; and the Pérez Art Museum Miami (PAMM), Miami, FL, amongst others.
Future exhibitions include Suffering from Realness at MASSMoCA, New Bedford, MA opening April 13, 2019-2020.(text website artist/courtesy Jack Shainman Gallery)