Kara Walker (in the collection of the Walker Art Center, US) 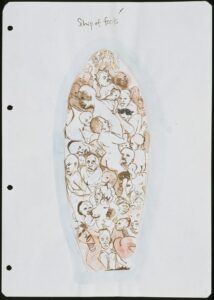 Kara Walker
in the collection of the Walker Art Center, US

Do You Like Creme in Your Coffee and Chocolat in Your Milk, 1997

About:
Kara Walker is among the most complex and prolific American artists of her generation. She has gained national and international recognition for her cut-paper silhouettes depicting historical narratives haunted by sexuality, violence, and subjugation. Walker has also used drawing, painting, text, shadow puppetry, film, and sculpture to expose the ongoing psychological injury caused by the tragic legacy of slavery. Her work leads viewers to a critical understanding of the past while also proposing an examination of contemporary racial and gender stereotypes. 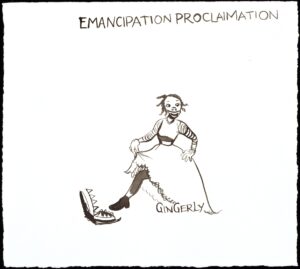 Education, Cut-Paper Silhouettes, Endless Conundrum, an African American Anonymous Adventuress
A native of Stockton, California, Walker earned a B.F.A. at the Atlanta College of Art and an M.F.A at the Rhode Island School of Design. She made her New York debut in a 1994 group exhibition at the Drawing Center with the 25-foot-long wall installation Gone: An Historical Romance of a Civil War as It Occurred b’tween the Dusky Thighs of One Young Negress and Her Heart (1994). Its caricatured antebellum figures, which are engaged in violent and sexual interactions, were silhouettes cut from black paper and installed directly on the wall. The silhouette technique has its roots in the sentimental Victorian “ladies’ art” of shadow portraits, but the scale of Walker’s work also alluded to the 360-degree historical cycloramas popular during the post-Civil War era for the depiction of battle scenes.

*
Walker has continued to use both the silhouette and cyclorama forms to explore the nature of race representation as well as the history of figuration and narrative in contemporary art. In Endless Conundrum, an African American Anonymous Adventuress (2001), she interrogates the representation of the black body by Modernist artists from Matisse to Brancusi.

The Means to an End…A Shadow Drama in Five Acts,1995

Films, Installations
In the early 2000s, Walker began making 16mm films and video installations that set her silhouettes in motion. Testimony: Narrative of a Negress Burdened by Good Intentions (2004) is a short, silent 16mm film in a lurid story of masters and slaves is told with shadow puppets and title cards. In the 5-screen video installation …calling to me from the angry surface of some grey and threatening sea, I was transported (2007), Walker set her black shadow puppets against intensely colored backgrounds and added a soundtrack of music by a Southern country band. The work references both the history of slavery in America and contemporary events such as the 2003 genocide in Darfur, Sudan, reminding viewers that images of black bodies in pain continue to be a European/American spectacle. 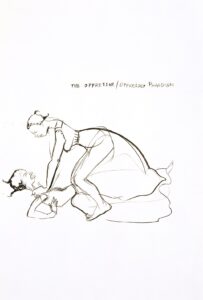 Sculpture, A Subtlety
In 2014, Walker produced her first site-specific sculpture, A Subtlety, or the Marvelous Sugar Baby, which was installed in a warehouse in a former Domino Sugar compound in Brooklyn. The centerpiece was a monumental Sphinxlike woman with caricatured features and an Aunt Jemima kerchief, which Walker fashioned from blocks of polystyrene coated with white sugar, which was attended by thirteen molasses-colored boys made of either cast sugar or resin. Both witty and unsettling, the work reminds us that refined sugar, a luxury once used to make the table decorations known as subtleties, was harvested by slaves on Caribbean sugar cane plantations. 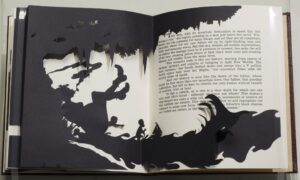 Recognition
In 1997, at age 28, Walker became one of the youngest-ever recipients to receive a MacArthur Fellowship. In 2002, she was the United States representative to the Bienal de São Paulo, and in 2012, she was elected to the American Academy of Arts and Letters. The Walker Art Center organized her first large survey exhibition, Kara Walker: My Complement, My Enemy, My Oppressor, My Love (2007), which traveled to museums in Paris, New York, and Los Angeles. Her work has been collected and exhibited by museums worldwide.
I think really the whole problem with racism and its continuing legacy in this country is that we simply love it. Who would we be without the “struggle”?