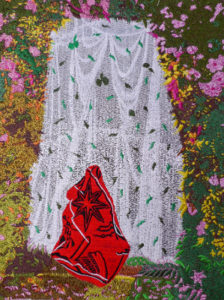 About:
Kimathi Mafafo is a multidisciplinary artist whose practise ranges from embroidery and oil painting to installation. Born in the semi-arid Kimberley in the Northern Cape of South Africa, Mafafo’s verdant imaginings, characterized by lush greenery and sensuous drapery, are far removed from the dusty mining town where she grew up. 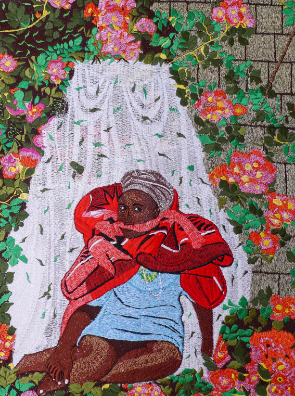 Mafafo’s father G. Rocky Mafafo, a respected water-colourist, encouraged his children to take art classes at the local William Humphreys Museum in Kimberly. She affectionately recalls wandering around the collections of 16th and 17th-century Dutch still-life paintings, entranced by the vitality of their colours and their exquisite level of detail. Inspired by the technicality of these works and under the watchful eye of her father, Mafafo became a technically exacting artist. She went on to obtain a National Diploma in Fine Arts from the College of Cape Town in 2007 and a National Diploma in Film and Video from the Cape Peninsula University of Technology in 2016. 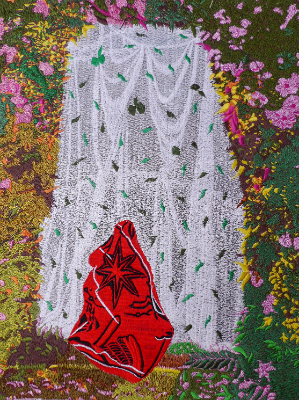 While her compositions may burst with riotous plant life each leaf and frond remain meticulously executed. Her compositions are seductive in their level of detail yet remain curiously flat, emphasizing their highly staged nature and the narrative element, which is central to her work.
Her imagery is partly guided by her desire to celebrate the black female form, inspiring women to embrace their own worth and beauty. Her earliest works are partly autobiographical and tell the story of a woman withdrawing from the urban lifestyle and finding strength in nature and within herself.
Mafafo works alongside Mustapha Saadu – a tailor from Ghana – with whom she has collaborated on a series of embroideries telling stories of women trapped under the weight of tradition and not fully realizing their worth. Embroidery is an ancient transcendent, and Kimathi as an emerging female artist has found solace in the art form, transforming herself and her artwork. 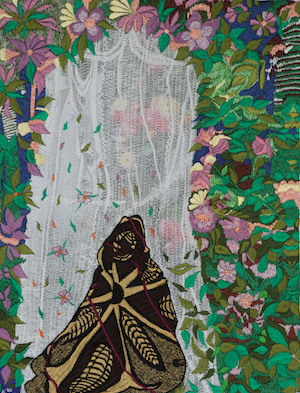 Recently, the artist has organized a group of Capetonian woman into an informal traditional embroidery society. The group embroider art pieces derived from her inspiration and artwork. In her own words,” the embroidery process is therapeutic, offering a platform to tackle gender issues and share advice as single parents.” As a group, it is their dream to attract more women to empower young females.
Inspired by stories of women around her, Mafafo likens the woman in her narratives to flowers slowly blossoming against all odds, subtly criticising traditional gender roles while at the same time encouraging women to realize their own strength.