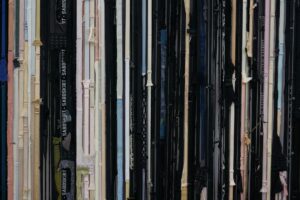 The exhibition discoursed the theme of powerlessness through the stories of a sex worker who became a prophetess, Madzimai Catherine in the Nyenyedzi Nomwe Apostolic Church. Mukwazhi sought to subvert the traditional power relations imposed on women’s bodies by patriarchal structures.

Zimbabwean artist Kresiah Mukwazhi had an exhibition at Blank Projects titled “Zviratidzo”. The show featured acrylic painting works that were finished with a collage impact, characterized by curt and haphazard brush strokes. It also featured mixed media works executed with bra straps on wood. The article will demonstrate how the artist dealt with the marriage between sensuality and spirituality in the exhibition. In a time in history when sex work can be forced on women, the artist dealt with the theme through the sensitive eyes of imagery, signs and paintings that combine to discourse power, powerlessness and moments of transition in the psyche. The exhibition featured works that were finished with mixed media, found objects combined with acrylic paint, clothe and wood. The intention can be shown was to explore how the feminine is the source of both collective and individual sensual expression. The article will demonstrate that these elements operated to create an exhibition that discoursed the body as a site of power, sensuality and spirituality. The show was also a strategic conversation about power that sought to subvert traditional perceptions of the female body through the lens of the feminine herself rather than the traditional conservatism of patriarchy. 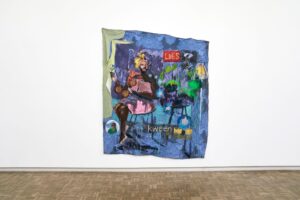 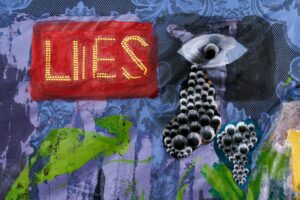 The exhibition discoursed the theme of powerlessness through the stories of a sex worker who became a prophetess, Madzimai Catherine in the Nyenyedzi Nomwe Apostolic Church. Mukwazhi sought to subvert the traditional power relations imposed on women’s bodies by patriarchal structures. Focusing and placing a narrative into the exhibition that is about personal triumph and spiritual realisation. The piece “Hondo mbishi” utilising the found medium of cloth, in the form of bra straps on wood, the artist relied on the impact of straight lines to inform how women like Madzimai Catherine are in control of their bodies. The work spoke not only to an individual’s struggles to assert herself in society but also how in the process of personal development society can be stifling. The bra straps represented what is formal about sensuality to an individual, they were symbolic of social pressures that were symbolized in the vertical straight lines they were presented in. 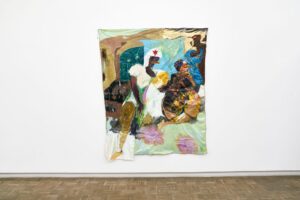 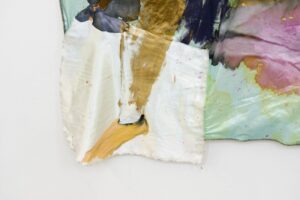 The collage-based work “…..nekuda kwekushaya” was characterised by a feminine figure wearing a nurse’s hat with a star on it. The work was an amalgamation of acrylic, cloth and the theatrical impact of the images in it. The feminine figure embraced an undefined smaller figure amidst ghost like images. Being haunted and seeking power became a conversation about breaking bounds in this piece. In the sense that the feminine act of nurturing realises a sense of power that pronounces not only an individual woman’s power but it can also pronounce the negative energies surrounding her. Mukwazhi is an artist interested in the labours of the body not just as a utilitarian organic tool, but as an organic nurturing facility as well. This not only enabled a symbolic reading of how power in this exhibition is an interplay between traditional patriarchal circumstances that modern women find themselves in but also how powerlessness comes define their choices and their personal development. 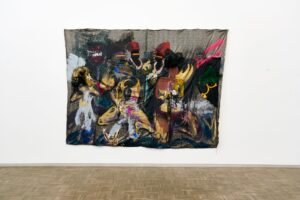 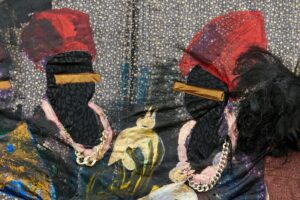 Mukwazhi worked between Cape Town and Zimbabwe, this measure of transition can be discerned in the impact of some of the works. Like the work “Pahasha” a collective of women were depicted in a close nit context as a single connected body. Some their eyes covered or blinded by a gold cloth. The piece was characterised and dominated by gold and black colours creating a contrast within the work that helped ascertain depth in relation to the images in the foreground. Being blinded has implications of being deliberate or choreographed, it spoke to a measure of power where the choice to uncover is available. Since the finished impact of the work was dramatized through blindness the artist has given a strategy of power for this collective single body. Mukwazhi demonstrated that comfort in each other speaks to power and seeking individuality assumes a sense of isolation. This collective body is symbolic of the intention to articulate sensuality as reflected in the feminine as a collective. Some figures in the work were finished without eyes for example, a strategy that renders permanent for them this interplay of power and powerlessness. That is unless they find comfort in the collective body. The feminine as symbolic of the psyche in the work operated through collectivism, it was informed by a measure of inverting perception inwards in order for the feminine to realise the relationship between sensuality and spirituality stems from within. Mukwazhi was conscious of the constant internal play of the psyche as a space of transition. The feminine collective body reflects this deliberate strategy through the choice to cover some of the eyes of the figures. 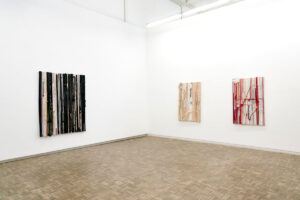 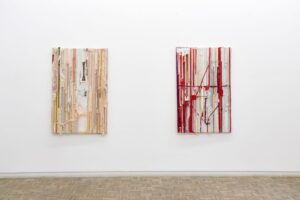 The piece “Nyenyezi nomwe” was a piece finished with a delicate and sensual impact, executed with light colours, pink, white and scarlet red. Mukwazhi with this piece created a work that related an overt and uncompromising femininity. The operation of the sensual in this work together with it being given the title where Madzimai Catherine is prophetess her church, spoke to the public and social connotations of what is sensual as spiritual and indulgent. Mukwazhi was conscious of the power relations or public perception that is imposed on sex work, but once again the straight formality of the bra straps gave the soft colours an implicit measure of play and indulgence that can be related to self-expression. She infused in the discourse of the body a measure of formality or function as a ‘tool’ of display for the public. Which can be a playful measure in that she understands that the image of the bra is socially understood to be a ‘tool’ that is concealed and socially accepted as private and concretizes a sense of boundary. The dynamic of power and powerlessness was realised in this piece in a soft and feminine measure. Mukwazhi’s discourse is not combative, rather she has infused in the discourse that what is sensual has an operation of perception that demonstrates that real power lies with the feminine body. 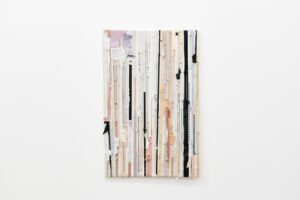 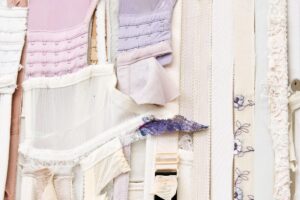 Mukwazhi in the exhibition through the story of Madzimai Catherine placed power in the feminine body. This choice was a statement about the power that lies within her, she also posed the question and problem of exercising that power. Women are in positions where this power can be taken away through force, Mukwazhi used the image of the bra straps to discourse the psychological space of that position. The politics of power through sensuality and spirituality were symbiotic in Mukwazhi’s discourse. She is an artist who is conscious that sensuality can take power away from spirituality for example. In her case she was not afraid to empower through powerlessness, utilising it as a symbolic foundation in order to pronounce the traditional and patriarchal boundaries imposed and forced on the female body. The triumphant narrative about Madzimai Catherine relates a measure of breaking those boundaries, challenging traditional perceptions of sensuality and sex work in the church. At heart Mukwazhi related how the feminine can be the source of her own sensual and spiritual freedom by symbolising the internal perception of her psyche as that source.