We Are Here. A Gentrification Photo Project 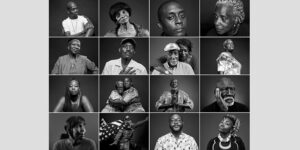 “We Are Here (Brooklyn) is a celebration of Bedford-Stuyvesant’s rich cultural legacy- a testament to its past and present … centers images and stories of long-time Bed-Stuy residents, cementing their place as neighborhood icons in the name of resilience and permanence.”

Clewert Sylvester on We Are Here Project in Brooklyn

A Community Installation in a Changing Urban Landscape

Although much of society focuses on the decorative elements of the visual arts, most people accept the fact that one of aspect of the visual arts that is extremely important is its ability to tell a story. Paintings and sculpture are excellent media for conveying a story, but one of the most powerful mediums to perform this task is that of black & white photography. Despite the various innovations in photography, the black and white image has been able to maintain its standing as a powerful medium to tell stories. It’s interesting to think about the fact that one captured moment can seem to tell so much. I think about the iconic photos of Dorothea Lange and how a simple image can speak volumes about what lies behind the image. The same holds true of more contemporary artists like Dawoud Bey and Jamel Shabazz. Is it the medium, or is it the fact that portraits seem to have the unique ability to draw the viewer in? It makes us ask the question why does the person captured in the image look the way they do. What’s behind the thing that I am seeing? 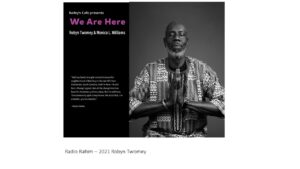 The dynamics of portraiture itself is a complete subject within art. Since the late 20th century there has been increasing attention paid to the subject of portraiture involving persons of African descent. This is not a new thing. People of African descent have been appearing in portraiture for the last 600 years. Unfortunately the significance of this fact had been largely ignored for most of that time. Now we see enhanced interest in the portraits of people of African descent which reflects the society’s sluggishly enhanced interest in non-European narratives. At present there is a conference on the issue of Black Portraiture at Queens University in Canada (BLACK PORTRAITURE[S]: Absent/ed Presence, 2021).The current climate of enhanced engagement around the issue of social justice has presented an opportunity for black and brown communities to tell their stories and express their interests and concerns. 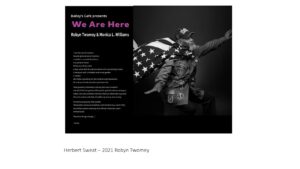 A great example of this is a recent art installation entitled We Are Here. It is a multi-format installation composed of black & white still photographs with accompanying narrative material as well as a virtual component that uses audio and photo images to tell the stories of 16 African-American residents of the central Brooklyn (New York) neighborhood of Bedford-Stuyvesant (Bed-Stuy). The physical installation was placed strategically throughout the neighborhood at parks, churches, playgrounds, and historic sites. This type of planning made the installation accessible to both the traditional ‘art crowd’ as well as to the community that is the genesis of the work. The physical installation will be on display for 11 weeks, closing on October 17th of this year.

The back story here is the fact that this central Brooklyn neighborhood has long been the epicenter of the African diaspora since the mid-19th century. The community now faces a slow but persistent wave of gentrification. The newcomers are generally young, affluent, and white. This new group is displacing the black residents who have been a fixture there for almost 200 years. The story is not a new one. It is the same story that can be seen in London, Paris, and throughout major cities of the world. This installation aims to give voice to those who have persisted and endured in a changing landscape where their future is uncertain. 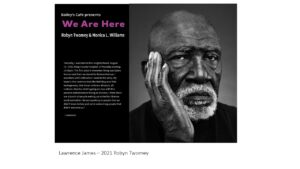 The photography is the work of Robyn Twomey. Ms. Twomey is a photographer who has distinguished herself with her ability to capture what can best be referred to as the internal essence of her photo subjects. The installation was conceived and curated by Monica L. Williams. Ms. Williams is a conceptual performance artist who conducted interviews with each subject of the 16 portraits. Segments of her interviews are presented with each one of the portraits. The digital aspect of the project uses streaming to allow the viewer to hear the person in their own words. 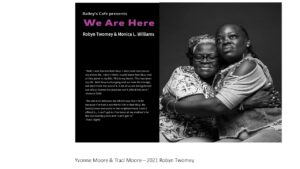 Each image is accompanied by information about the individual and how they came to live in the community. The images are so moving that they could stand alone without the narrative, but the words help to convey the story. The project was initially commissioned by Bailey’s Café and produced though the cooperation of multiple community partners. Its essence can best be summarized by the words of the curator “We Are Here (Brooklyn) is a celebration of Bedford-Stuyvesant’s rich cultural legacy- a testament to its past and present … centers images and stories of long-time Bed-Stuy residents, cementing their place as neighborhood icons in the name of resilience and permanence.” The physical installation ends on October 17th, but the digital aspect of the project will persist and can be found at https://asquietasitskept.space/we-are-here