Lamyne M. The artist with a camera. 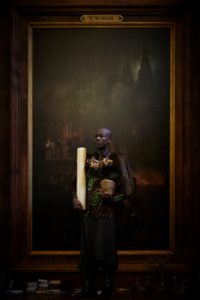 “We are being anesthetized by beauty, by the color of fabrics but behind all this, there is something else. The Silk Road is from where the most beautiful fabric originates. But it is also the origin of the imprisonment, the locking up of the planet”.

Lamyne M. The Artist with a Camera

Lamyne M is probably best known for his three-metre tall “Grand Royal Gowns” first exhibited in the Basilica of St Denis, the final resting places of the kings and queens of France. This powerful series keeps on evolving, transforming over the course of the artist’s travel. Yet this is only the tip of the iceberg. 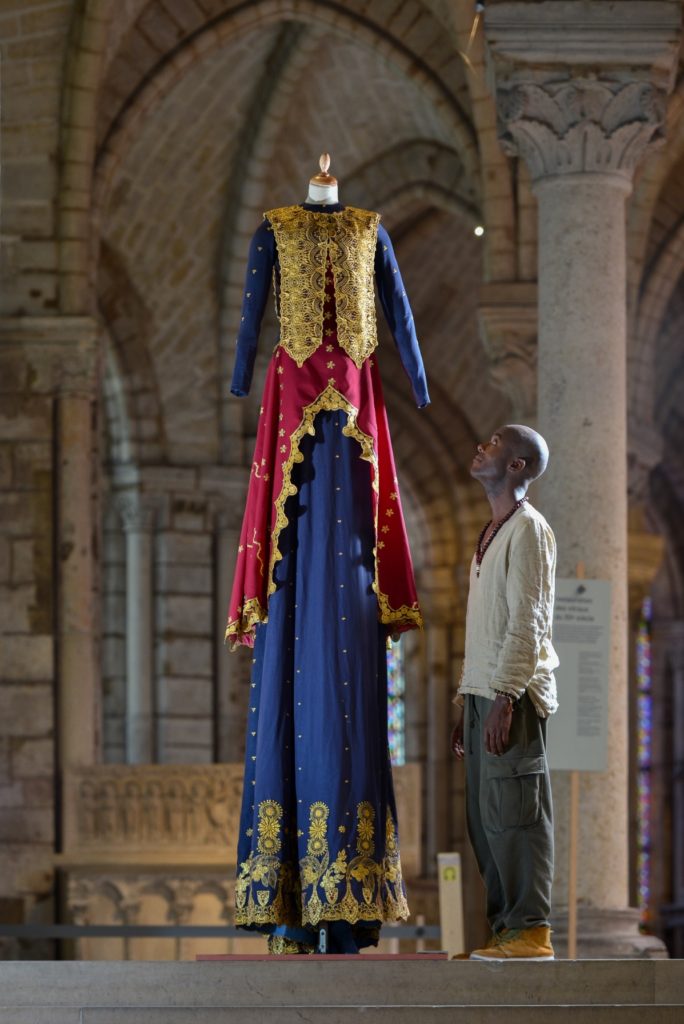 A Citizen of the World

Based in Europe, Lamyne M was born in Cameroon. He is also a Fulani. The Fulani people are a traditionally nomadic ethnic group spread over many countries, predominantly in West Africa. As you will see through his work,  the artist is today an avid traveller and a Citizen of the World.

When he was 9 years old, Lamyne M’s grandfather took him on a very long trip. They travelled on foot for three months as far as Agadez, going from market to market, an initiation ritual that made a huge and long-lasting impression on the artist. ‘For these reasons everything related to migration is very important to me. The Fulani people did not wish to be confined to a single country. I hate the idea of buying land. Of fighting for a piece of land. In my house, there are 3 suitcases which are always packed. Everything important to me is packed. It has been like this since I was a child. Nothing on the ground is my property’.

.
As a consequence, the themes of immigration, packing, wrapping, locking…. are recurrent in Lamyne M’s work. But not only. For instance, one of his series, entitled Gris-Gris (charms/talismans) is a personal interpretation by the artist of charms traditionally crafted on the African continent for people who migrate to the Western world. As always with Lamyne M, his process at work is much more subtle and surprising, 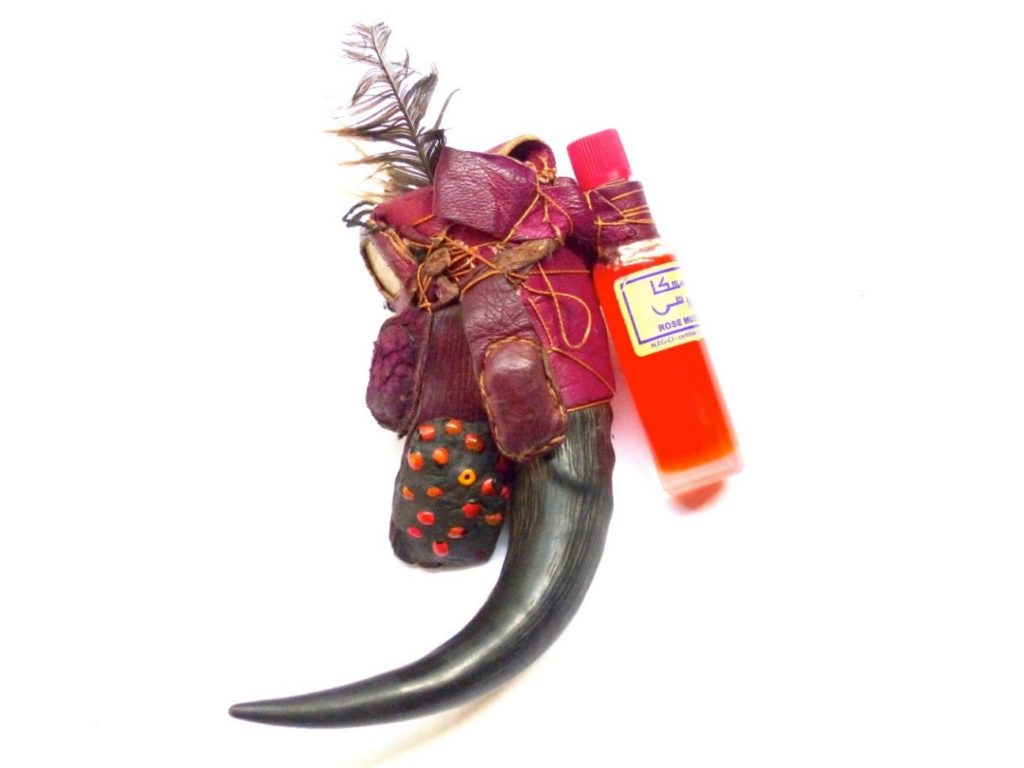 In this photographic series, the artist gives his vision of the Silk Road. In each image, a figure has been wrapped. Standing or lying for some specific reasons. Yet that will be revealed when the series is finished. 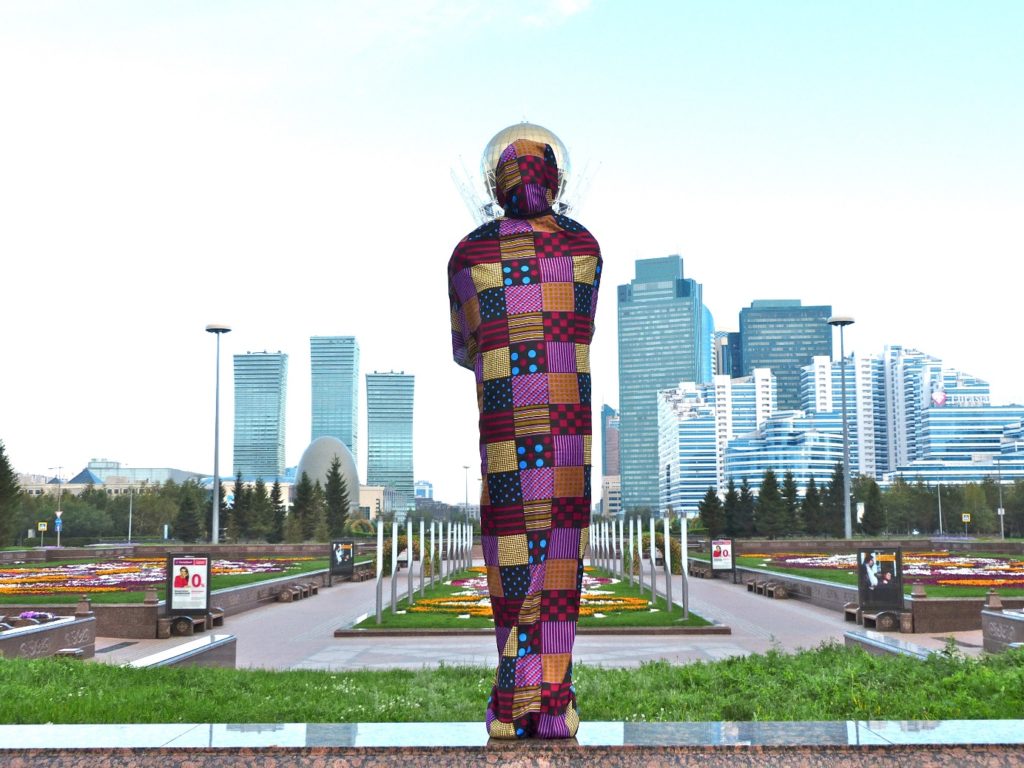 Why give such a title to this series ?

.
“We are being anesthetized by beauty, by the color of fabrics but behind all this, there is something else. The Silk Road is from where the most beautiful fabric originates. But it is also the origin of the imprisonment, the locking up of the planet. I am thinking of the way the fabrics are made, how they are transported. There is considerable damage. There is also the issue of storage which is far from being respectful of the environment. For instance, the cellars, the storage tanks for the fabrics which are still used today, were sheathed in abestos… We have absolutely no information about what we wear. Today, every morning, the same number of accessories are made. When are we going to stop? If we stopped producing all these accessories, we could recycle the ones we already have for the next 50 years. We do not recycle much. Only 20%, because it is compulsory. How can we keep on like this?”

The shooting locations are never chosen at random by Lamyne M; they are strategic landmarks of the Silk Road. Places linked to the administration. Places where there were uprisings. In this amazing body of work, the artist talks about today and yesterday. He denounces and condemns the ecological downward spiral of the garment industry. He also sheds light on important places, events that were erased from the history with a capital H.

.
What about the fabric used ?

.
Lamyne M always brings the same fabric panels to the countries chosen for the project : whether it is Kazakhstan, Ouzbekistan, Kirghizistan, Russia, China or Mongolia so far. The artist has to continue his work in two more countries which I shall not mention. Wait and see. “These fabrics originate from the African continent. Some come from Paris. But originally they all come from the African continent. So it is the vision of a contemporary artist, based and living in Europe, who visits the Silk Road with a different approach, with a new angle.”
During his frequent travels around the world, Lamyne M retains his identity. “My identity stays the same. I have not used the fabrics from over there but I have rather brought fabrics from home.”

.
The fabric as a metaphor ?

.
To Lamyne M, each item of clothing is very political : “Dictatorship involves the alteration of persons through ideology. Some clothes cannot be worn in France freely. A woman should be able to wear whatever she wants to, without being criticized. Sometimes, this does not reveal itself through words. A simple gaze is enough. Such attitudes reflect a form of imprisonment.”

.
Hence the choice of the artist to often hide the whole body. It is also a way to talk about the fabrics : about their composition but also, by extension, about the social fabric. “‘You have to make some knots, weave, braid, create edgings to reinforce a piece. If you pull the weft of the fabric, it reveals a problem. How many fabrics are returned, are not used because of a flaw ? Fabric is a useful metaphor. It is the irrefutable proof that each person is useful. It is normal to face some difficulties yet in today’s world one can observe a willingness to hide, to gloss over certain aspects of the truth.”
Relentlessly, Lamyne M creates in order to shed light on what is hidden. He denounces ecological scandals but also draws attention to everyday heroes.

Another example is a series of portraits shot in Chimken, in Kazakhstan. Lamyne M has photographed a group of committed artists who dared tackling politically sensitive themes. This group existed before the creation of the city. They are considered as the first group of contemporary artists of the country. In these portraits, one can see these artists standing, holding in their hands the flags of all the Soviet countries. These flags, if one looks closer, are sorts of patchworks made up by the artists themselves. They are made up of silk, a noble material. A strong message here again. Lamyne M photographed them so that no-one forgets them. To tell the world they exist. To save them from oblivion. 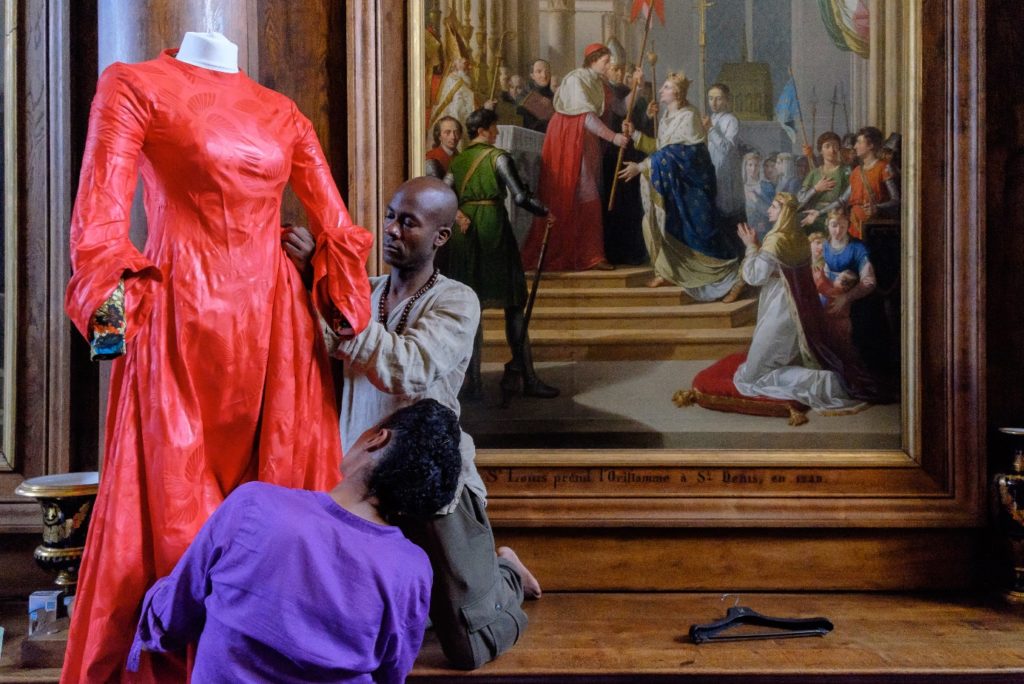 The artist at work, courtesy the artist.

I was very intrigued by a picture of the artist at work in the Basilica of St Denis (a highly symbolic place to those who know the history of France and its upheavals) which reveals, in the background, a historical painting. Lamyne M explained to me that this painting had hardly ever been seen by ‘laymen’. The paintings are indeed today in a space reserved for the clergy. They were commissionned by Louis XVI and made in situ, in the sacristy. These paintings inspired him to create a series entitled Moi Lamyne Melchior. Lamyne M changed his appearance, dressed and staged himself with the aim of revisiting history. The garments he wears are either entirely made by the artist or customised. The photograps were taken by the artist himself.

.
The purpose of Lamyne M here is to invite us to think of the way one enters into history. “History often talks about some people who, in fact, have not done much. They found themselves in the right place, at the right moment. All elements were brought together. Or these people were part of a lobby group and hence went down in history. Others could have made their mark on history too. In this way, these images become a parable. It seems History is entirely fabricated.”
Thus in the series Lamyne M puts on a performance to talk about the erasing of other people for reasons of power, of domination. The first contacts with Europe were of course not necessarily with slavery. Yet many need to be remembered. Unfortunately.

Have a close look at the first picture. The ‘kalpak’ (Turkish bonnet)  is upside down. It symbolises knowledge. Here Lamyne M creates a powerful metaphor. By becoming ‘Lamyne Melchior’, he embodies the black artist who brings the light. He has become part of the painting and thus his character integrates history. By doing so, he fills the yawning historical vaccuum, events not mentioned, and reclaims a place for entire peoples who have been forgotten.

Note:Lamyne M has agreed to explain some of his current photographic works for us. I am thus extremely grateful for his trust and must therefore insist on the fact that all the photographs published here are and remain the intellectual property of the artist, and may not be infringed or violated – in accordance with the laws of copyright.