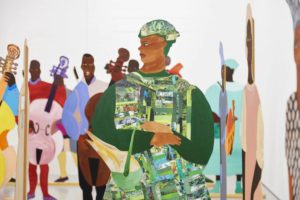 Warp and Weft is a survey of works by the 2017 Turner Prize nominee, Lubaina Himid.

A key figure in the Black Arts Movement, Himid first came to prominence in the 1980s when she began organising exhibitions of work by her peers, who were under-represented in the contemporary art scene. Her diverse approach disrupts preconcep-tions of the world by introducing historical and contemporary stories of racial bias and acts of violence inflicted upon oppressed communities.

Himid is best known as a painter, and Warp and Weft is comprised of three bodies of work in which the artist adopts the mantel of the History painter to question its imperial-ist tradition. By reinserting black figures into this arena of power and prestige, Himid foregrounds the contribution of people of the African diaspora to Western culture and economy. 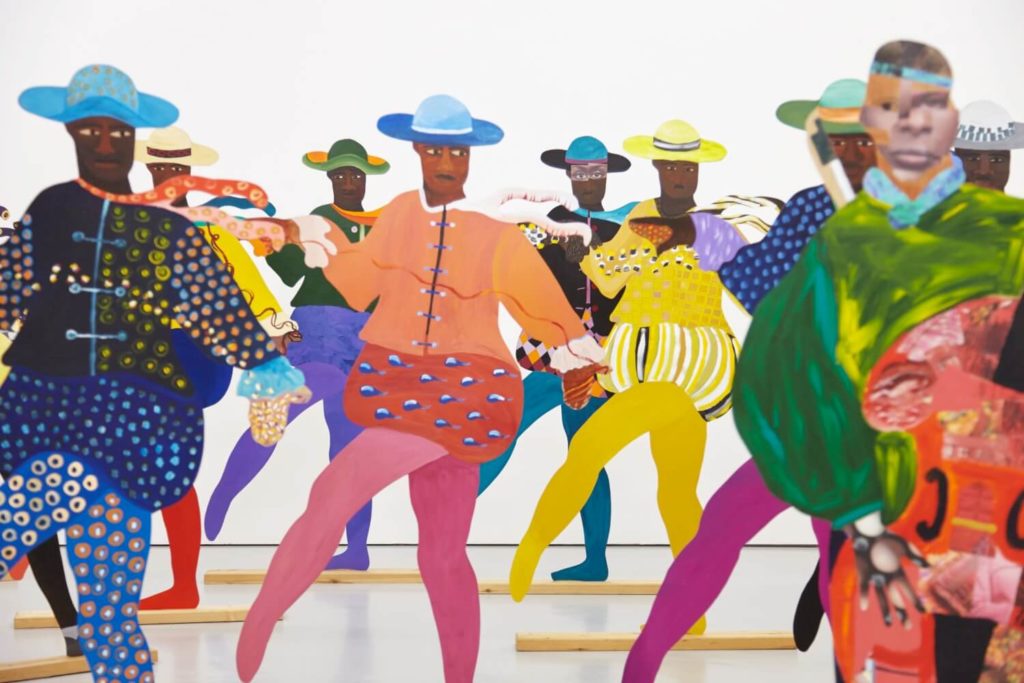 The exhibition’s title, Warp and Weft, refers to the process by which threads are held in tension on a frame or loom to create cloth. Himid chose the title for its reference to Col-chester’s important position in the wool trade between the 13th and 16th centuries, and its complex history of race and migration that is reflected in the productive tensions of Himid’s work.

Naming the Money (2004) is the largest installation to make use of Himid’s signature ‘cut-outs’ — paintings made on freestanding, shaped boards that viewers can walk amongst. Like stage-flats, these works reflect Himid’s early training in theatrical set de-sign. At Firstsite, 60 cut-outs represent African slaves in the royal courts of eighteenth century Europe. The work features a soundtrack which gives a voice to the figures, and shifts between their original African names and trades and the new names and profes-sions imposed upon them in Europe. 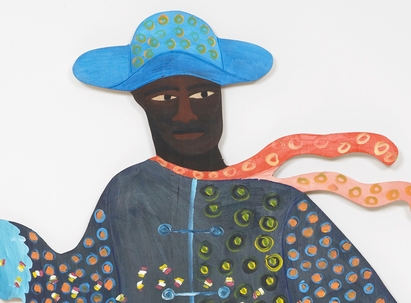 A series of 84 small-scale paintings, Cotton.com (2002) derives from the defence of Af-rican slaves made by the workers of Lancashire’s cotton mills in the nineteenth century — a historic moment of solidarity between the British working class and their peers across the Atlantic. The enforced labour of cotton pickers on the American plantations underpinned the economic successes of the Industrial Revolution in Britain, a fact that became evident as the American Civil War led to cotton shortages, mill closures and mass unemployment. Despite the high personal cost, the workers’ unions in Lancaster passed a motion in support of Lincoln’s efforts to end slavery. An accompanying text reenacts this conversation between workers on two continents, an exchange dependent not upon language but rather pattern. Himid has said, ‘The point I am often exploring vis-à-vis the black experience is that of being so very visible and different in the White Western everyday yet so invisible and disregarded in the cultural, historical, political or economic record or history.’

The exhibition also includes the ongoing series Negative Positives: The Guardian Ar-chive (2007 – 2017) that continues Himid’s project of making visible. For ten years, Himid has painted over The Guardian newspaper to highlight the reoccurrence of nega-tive news — in particular headlines about violent crime and drugs — that are frequently placed next to representations of successful black people. Himid explains: ‘The invented and borrowed patterns on each page are painted to highlight this strange and inappro-priate use of people as signifiers and finally to vent my spleen. Every day in Britain even the “liberal” press is simultaneously visualising and making invisible black peoples’ lives.’ In this work and throughout the exhibition, Himid’s work reasserts the importance of marginalised histories and visual cultures, a project that is as critical in 2017 as in the 1980s. 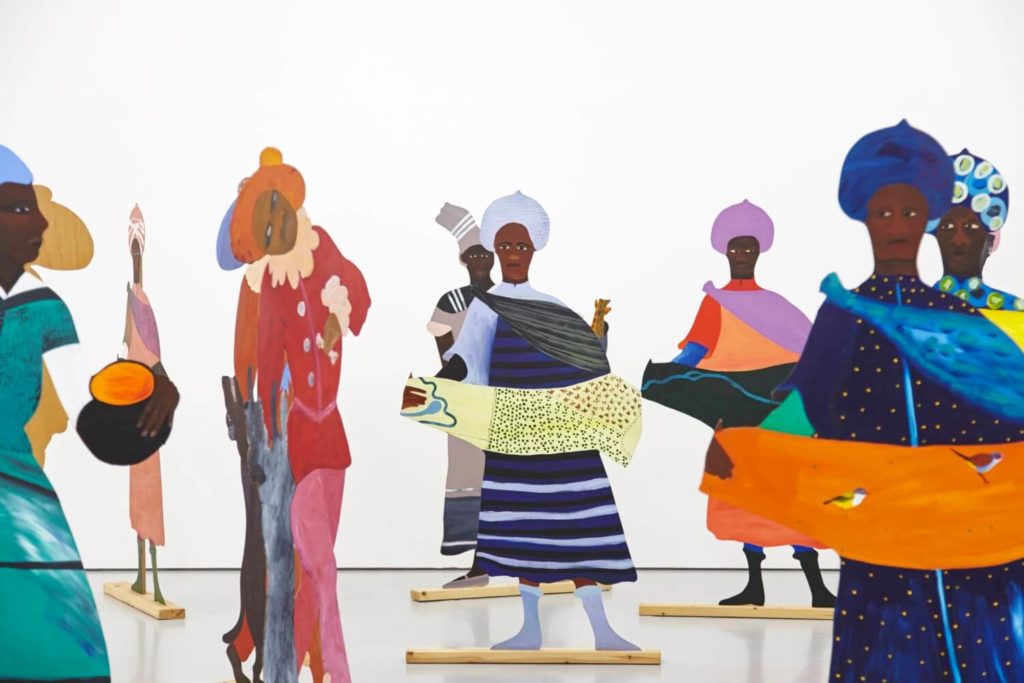 Says Firstsite Director Sally Shaw: ‘In a year in which Firstsite is exploring issues of identity, and in a climate in which migration and immigration are particularly contentious, we are delighted to be staging this major presentation of Lubaina’s work.

Throughout her forty-year career, Lubaina has unflinchingly explored the history, impact and contribution of migration in western culture, in particular that of the experience of black people in the United Kingdom. The work that has been brought together for this show, all of which was produced in the last fifteen years, is as beautiful as it is thought-provoking, and is an insight into a significant and influential artist.’

“A trio of UK shows shines a light on the under-appreciated hero of black British art.” Louisa Buck, The Telegraph

“Born in Zanzibar and raised in Britain, Lubaina Himid makes work about everything from slavery to Thatcher to the cotton trade. Now in her 60s, she’s finally getting the recognition she deserves.” Hettie Judah, The Guardian 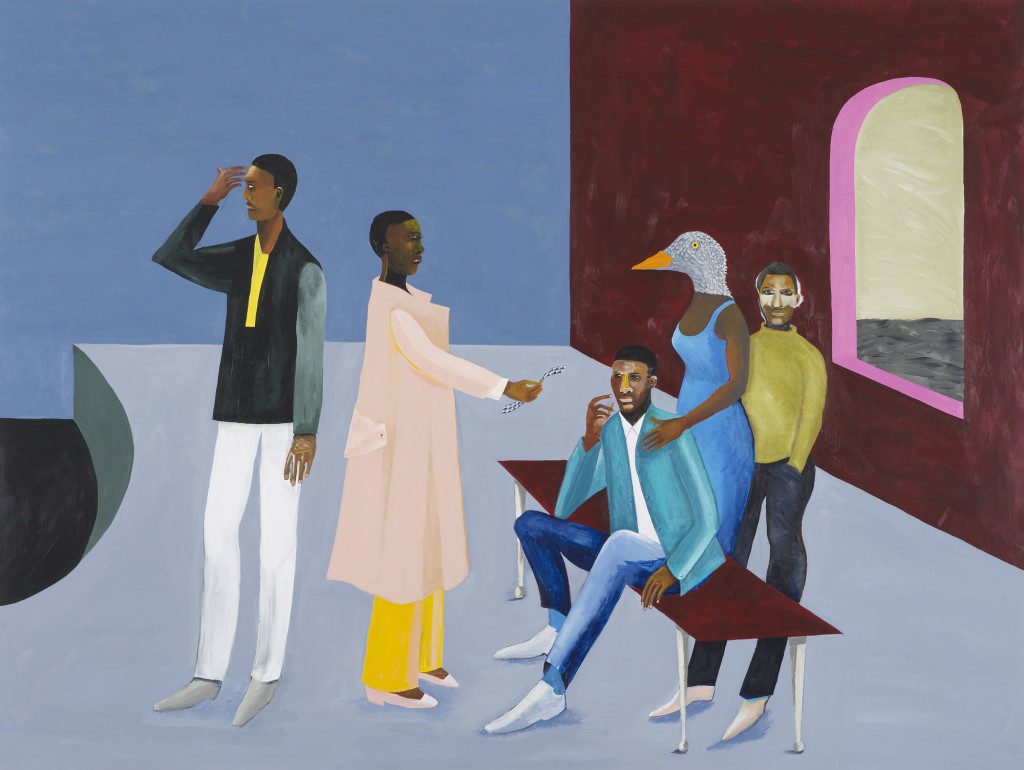 About Lubaina Himid:
Lubaina Himid (b.1954, Zanzibar) works in painting, drawing, installation and printmaking. Himid holds a BA in Theatre Design from Wimbledon Art School (1976), and an MA in Cultural History from the Royal College of Art (1984), where she graduated with a thesis entitled ‘Young Black Artists in Britain Today,’ anticipating her pioneering involvement in the Black Arts Movement of the 1980s and 90s. Himid organised a number of seminal group exhibitions in London throughout the 1980s, including Five Black Women, the Africa Centre (1983), The Thin Black Line, ICA (1985), and Unrecorded Truths, the Elbow Room (1986), which brought to public attention her own generation of black female artists. Over the past 30 years she has exhibited widely, both in Britain and internationally, including the solo exhibitions: The Ballad of the Wing, Chisenhale Gallery, London (1989); Inside the Invisible, St. Jorgens Museum, Bergen, Norway (2001); Revenge, Rochdale Art Gallery and South Bank Centre, London (1992); Navigation Charts, Spike Island, Bristol (2017); and Invisible Strategies, Modern Art Oxford (2017). Group exhibitions include Transforming the Crown, Studio Museum Harlem, New York (1997-98); Uncomfortable Truths: The Shadow of Slave Trading on Contemporary Art, the V&A Museum, London (2007); Migrations, Tate Britain (2012); Keywords, International Institute of Visual Arts, London, and Tate Liverpool (2013/14); and Burning Down the House, Gwangju Biennale, South Korea (2014). Forthcoming solo exhibitions include Hollybush Gardens, London; Turner Contemporary, Margate (both 2018).

Himid holds the position of Professor of Contemporary Art at the University of Central Lancashire, where she leads the interdisciplinary visual art research project Making Histories Visible, reflecting critically on the success and failures of the Black Arts Movement and participating in numerous conferences on art of the diasporas. Revisiting her earlier work, Himid staged Thin Black Lines in 2011 at Tate Britain with curator Paul Goodwin, and has produced a series of research documentaries including Open Sesame (2005) and The Point of Collection (2007), in collaboration with Tate Liverpool. Himid lives and works in Preston, UK, and is represented by Hollybush Gardens.