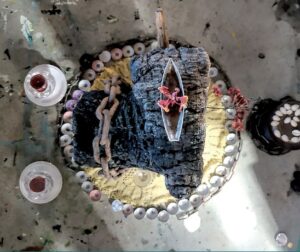 Lunar – an exhibition in Paramaribo, Suriname – wanted to show the entanglement of peoples with different ethnical, cultural, and religious backgrounds.

LUNAR: an art manifestation beyond the human?

For pearls of the Caribbean, you visit the Dutch Kingdom: The Caribbean Island of Curaçao. However, I think the treasures of the Caribbean are hidden in the Amazon. I find one of such treasures in Suriname, the greenest country on earth. What also makes Suriname so special, is the entanglement of peoples with different ethnical, cultural, and religious backgrounds. In this Caribbean essence, the exhibition Lunar took place at Readytex Art Gallery between October 8th until November 6th. As an ecology that connects cultural and natural forces, this event manifested as kick off for the project Alakondre: A Space in Time. Alida Neslo, art director and theater maker in Suriname, sees alakondre as contrary to apartheid. Leading this process, I am questioning to what extend can alakondre function as a holistic conversation of inclusion?

Upon entering, artworks of ‘local masters’ could be admired. Paintings by the late Erwin de Vries and his deceased wife, Lilian Abegg, show their own image and simultaneously create new narratives. In Lunar their legacy lives on, however, also in another context. Erwin is famous for his versatility regarding technique, imagery and use of materials, but the selection for this exhibition is limited to his works on paper made in the 1960’s, of which some include the number 13. It is fascinating to see this number repeating in his work. Is there a correlation between Erwin’s fascination with number 13 and the Maya cosmology? His artworks were installed as reference to hope, inspired by time in Mexico. 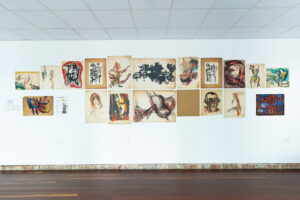 The installation Letters from Mexico -made up of paintings by Erwin, a poem about him by Surinamese artist Kurt Nahar, and an empty piece of cardboard- reminds that the current crisis will be followed by a hopeful time; just as the sixties were a period of revival after the Second World War. The empty piece of cardboard invited viewers to encounter ‘these letters’ and symbolically create space to ‘write’ their imagination giving substance to that hope. It is suspected that Erwin was ‘infected’ by traces of cultural expressions of among others, the Maya, and the Aztecs (peoples from Mexico) because his artworks show traces of their beliefs and knowledges. Gained from their cosmic observation, the Maya created their calendars related to how they observed the cosmic cycling. With four seasons, each representing 13.000 years of modern-day calendar, Mayan understanding of a cosmic year relates to 52.000 times earth’s year-cycle. 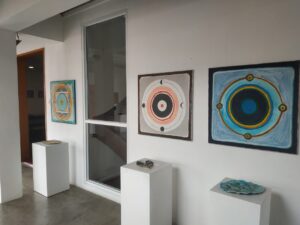 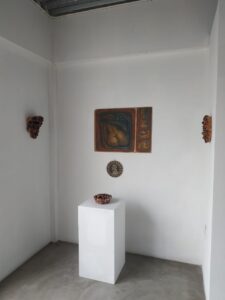 A Never Ending Story 2 and 3

Above, spectators found installations with artworks of both local masters. The installation A Never-Ending Story? volume 2 is built with work by the late Lilian Abegg. It is made up of four of her ceramics and four of her paintings. These paintings carry mechanical, mathematical, symmetrical, and cyclical imaginaries. Especially noticeable is the aspect of four phases, usually revolving around a nucleus. I see this ‘unity of four’ as a reference to four seasons, to four elements, to four wind directions, and to four dimensions. To my knowledge, this is the power of death and rebirth. Thus, the sustainability from cyclical approaches comes together in her work, making this installation a celebration of the life-death-rebirth cycle.

Volume 3 of A Never-Ending Story? shows me how Erwin de Vries was consciously or unconsciously inspired by Pre-Columbian knowledge. This installation holds a painting by him, three of his ceramic masks, and a craft piece depicting the Maya calendar. It reflects quite different images of his work as known generally. In fact, it shows Meso American technology and spirituality since I see in the imagery of Erwin’s masks the inspiration from the Aztec calendar and in the painting from the Maya culture, however somewhat modified and distorted due to his fascination with sexuality. Does his use of sexuality in the context of this installation symbolize an ethic of love? Do the installations of these ‘local masters’ emphasize that which goes beyond the human?

To feed the exhibition’s soul 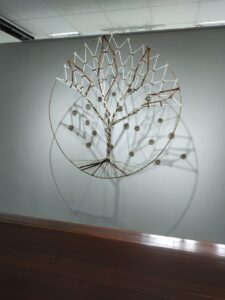 Shaundell Horton depicts the correlation between a thing and its shadow. Her Tree of Life was installed as reference for “As Above, So Below”. With its roots that reach deep into the earth, and its branches that spread up towards the sky, “I see the tree as a symbol for the connection between heaven and earth and found it quite fitting because we are all part thereof, and because we can also create that connection within ourselves”, Shaundell states. She created this tree that hangs from the ceiling with ropes and strips of cloth within a large open circle. With the help of a carefully directed light source, the artwork casted a beautiful shadow on the wall behind it. On that wall, the small, crocheted doilies, which are a nostalgic reference to her Guyanese heritage in many of her artworks, appeared to be hanging from the branches of her ‘shadow tree’. Shaundell: “Symbolically, this again indicates a connection between the tangible and the intangible, between earthly and the spiritual.” 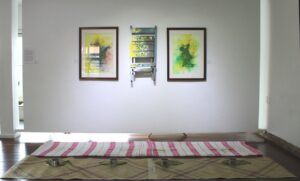 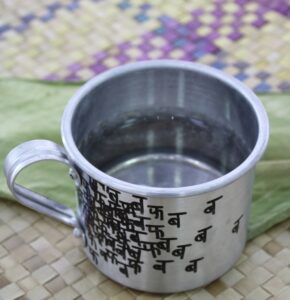 Sunil Puljhun focused on communal nourishing rituals inspired by Hindustani culture. His installation Bhojan (food) presents the traditional seating arrangements during special meals in the traditions of his ancestors. He explains: “The calligraphy on the cups, a chair and in the paintings in this installation are also cultural legacies from my ancestors who came to Suriname, and they are applied to the work as symbolism for communication and the transmission of traditional knowledge.” According to Sunil: “Dried rice stalks were covered with a straw mat and a sheet, to create a comfortable seat on the ground. Yet another row of rice stalks served as a table. If there weren’t enough rice stalks, they were replaced by straw mats. Slots were made in the rice stalks to ensure that the leaves of the ‘waribon’ or banana trees, which served as plates, were well-supported. Eating was done with their hands instead of utensils. Typical aluminum drinking cups were rented from a local organization or a Mandir in the neighborhood.” The Hindustani culture came to Suriname from India through people as indentured laborers. They brought with them their technologies for communal dining. Much has changed over time. People gradually began sitting on wooden folding chairs, and wooden benches were used as tables. Now in 2021, there are modern tables and chairs but eating with their hands is still a relatively common practice. 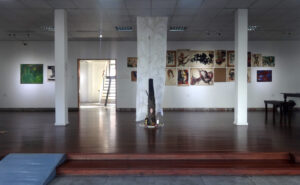 I am in dialogue with the installation Obatalá and Éndhang. In this joint installation, Kurt Nahar and Sri Irodikromo reflected on traditions in which people communicate with their ancestors, with objects and elements in the spirituality and offering rituals of various Caribbean cultures. This artwork is their collaborative way to preserve some of the complex relations of belief systems in the Caribbean. Kurt is researching different religions that take their inspiration from the African Yoruba-religion, for which he states: “I am triggered by the many commonalities that I discovered in the Cuban Santería, the Haitian Vodou, the Surinamese Winti, and many others in the region.” His contribution to this installation was centered around a black phallus-shaped charred wooden trunk on which he placed an image that resembles female genitalia. By doing so, “I reflect on the strength of the feminine that is present everywhere”, he says. In essence, he refers to the male and female aspects of Obatalá, the Yoruba-Orisha who played an important role in the creation of the earth.

For her part, Sri is driven mostly by the rituals associated with the Javanese Jaran Kepang tradition. Sri: “Among other things, I focused on the Sajén (sacrificial table) done by the leader of the Jaran Kepang in his home on the eve of the actual event, to appease the souls that may still be wandering.” According to her, “this sacrifice is necessary for the success of the Éndhang when the right soul or spirit enters the body of the dancer during the Jaran Kepang.” She symbolically portrays the mystique of these rituals with faint ghostlike figures painted with wax on a long white cloth that hangs down from the ceiling. And, with a floating offering table covered as is traditionally required with a white tablecloth on which she also placed the Sajén, wrapped likewise in white cloths. Does the installation Obatalá and Éndhang demonstrates how in the Caribbean spirituality is diverse and inclusive?

The entrance of Lunar consisted of a mysterious gaze and atmosphere. Thinking of the art-spiritual relation as intimate dialogues, I wonder: what does this remind of? My reference is within the curatorial message upon entering: “Wi Tru Fesi offers the viewer a fusion, inspired by identification (the propagation of identity as adaptable), inclusion and diversity. In this, objects, images and meaning form a harmonious whole between life and death. This holistic approach strives towards synergy; this entails the strength that results from a meeting of opposites, because when we can truly see each other for who we are, we can work together to build a sustainable ecology.” 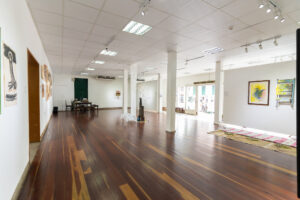 Staging a ‘portrait’ of all participating artists, resulted in a collection of several metaphors. Together these objects perform Wi Tru Fesi: lingua franca in Suriname for Our True Nature. The installation is inspired by the Alakondre Art Manifesto 1 during the Alakondre: Wi Tru Fesi exhibition in February 2021 at Readytex Art Gallery. Performing Wi Tru Fesi includes depicting Lunar’s self-portrait. No self-portraits in the literal sense however, because it showed a capacity beyond the individual. It may be portraying a beyond the human thing, or something greater than just conscious use of creativity.

In any case, looking back at how this invisible force has guided the process, I want to conclude as such: there is something entangling the selected artists in space-time. May it be their individual strenght collaborating within a network, or even another non-human power; either way, I think of it as a universal ‘identity’ guiding the process to mimic its energies. I hope that this force, of fusing different points of view, was the way that will reactivate during execution of the project Alakondre: A Space in Time. Through Lunar, I have experienced that this courage manifests itself within community. That is why I think of Alakondre, identification in the context of Suriname, as model of versatility: a confluence of various technologies resulting in a transcendent appearance that allows to perform diversity while being inclusive.

Spectators walked through Wi Tru Fesi, to be embarked on Lunar. To my sense of understanding: a ritual to rewired spectators, as they performed a space of strength while entering  Alakondre: A Space in Time. So, those who dared to feel deeply… will know how to move from a space of power.

Miguel E. Keerveld is an artist, curator, writer from Suriname. He lives in Paramaribo.