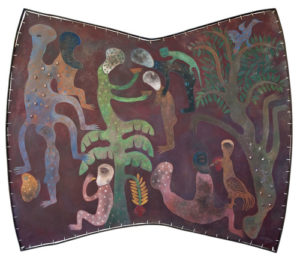 About:
Manuel Menive is the leading Afro-Cuban artist — possibly the leading Cuban artist — working today.
Born in Havana in 1944 into a family that practiced Santeria, he studied conventional art at the Academy of San Alejandro. Since graduating in 1963, his work has primarily reflected his Afro-Cuban roots.
According to Gerardo Mosquera (a prominent art critic based in Havana):
He began painting in the mid-1960s with a profound, vivid vision of the Yoruba myths that have been preserved in Cuba, in what for me continues to be the most valuable artistic moment of his career. This ‘dark period’ — from which several of his works have been lost, including all his sculptures — centered on this mythology, its implications, and its meanings. It could be said we were witnessing the artistic re-creation of the myth, but done from within, by a bearer of the magical/mythical mode of thought who was at the same time a modernist painter. Nonetheless, his projection of the myth always transcended its particulars to reach a universal plane and pose general, ‘philosophical’ problems. With his unique personality, Mendive was one of the main actors in the expressionist movement — a ‘rational’ expressionism in his case, for being mythological — who produced the best works in Cuban art during the second half of that brilliant decade, along with Cabrera, Morena, Chago, Antonia Eiriz, Raul Martinez, Umberto Pena . . . . 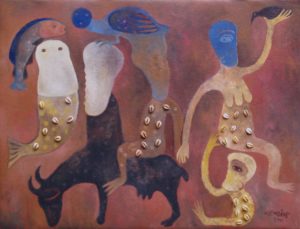 Mosquera continues:
Mendive is a professional, but one with popular roots, raised in an environment that has conserved Yoruba traditions, and he is an artist who has never broken with popular culture in his works nor in his personal life. He now creates his own myths instead of following the traditional ones, but they are still rooted in tradition and are the fruits of mythological thinking of a living, familiar, interiorized mythogenesis. Mendive is not an African in America: his utterly Cuban paintings display the complex synthesis of the Caribbean, its ethnocultural mixing and its mestizaje of time . . . .
Now . . . he is combining stage art with his paintings, in interdisciplinary pieces that stand as the most creative of his current works. He attains an art of movement and sound, a terrific mixture of painting, dance, music, pantomime, body art, song, sound, ritual, spectacle, performance, comparsa, and procession, in which ‘high culture’ and popular culture once again rub elbows.”
[Gerardo Mosquera: “El mito por dentro” Revolucion y Cultura. Havana. August 1987.] 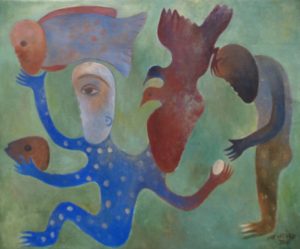 Mendive always dresses in full white. Inspired by the Orishas and the energy conveyed through nature, he paints and sculpts in iron, wood, plastic and metal. So far as conventional influences on his art are concerned, Mendive says:
My favorite painter is the master Wilfredo Lam. He has given me much hope. I like African art in general. All the art coming from Africa interests me very much, including Egypt, the Sumerians, Mesopotamia, and all the surrounding area. From later times, I like the works from Raphael to Jackson Pollock. Each time I see a painting by the latter my heart flutters.
I’ve been lucky enough to visit Mendive at home several times, first when he lived in Cotorro, later at his larger space “in the country.” 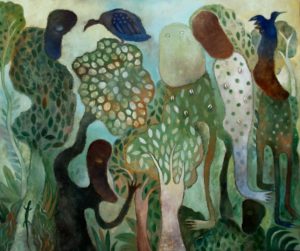 I am very interested in nature, vegetation, forest and the country . . . Therefore, I live away from the city. I lived in Cotorro for a while. There was some vegetation there, but not enough. I needed much more space and much more greenery.
My house is always full of friends, full of people who frequently visit and accompany me. That makes me very happy.
The gods are everywhere . . .
I am magic, I like magic, and life is magic.
My work is my great hope. My work is my true speech.(text CubanArtWorld.com)