There are many aspects of Messouma Manlanbien’s work that attracted me and that I enjoyed when visiting the exhibition; probably the most obvious one is the focus on women as the central theme not only in the exhibition but in Marie-Claire’s work in general, and the prevailing stereotypes that many of us battle against on a daily basis, the acknowledgement and celebration of our foremothers teachings also moved me. I appreciated the artist’s attempt to contribute with her work to these striking debates.

At just under thirty years old, Marie-Claire Messouma Manlanbien has a long-standing career as an artist and I dare to presume a successful future ahead. Whilst sustaining an inquisitive attitude towards contemporary stereotypes of womanhood and blackness Messouma Manlanbien investigates the concept of the feminine in her work. She draws on the aesthetics of the matrilineal Akan culture, to re-create, re-define and reveal alternative forms of being a woman in the contemporary world.

The artist has mixed heritage, her father being from Ivory Coast and her mother from Guadeloupe, and she aspires to make this métissage or creole quality present in her work by the combination of things and concepts. Messouma Manlanbien blends the use of a number of mediums, from sculpture to poetry, from sewing and tapestry to video-performance and installation; she mixes soft and rough textures in her pieces, fragility and strength; she combines the feminine and the masculine; she brings together the aesthetics of her foremothers to which she was exposed during her upbringing in Ivory Coast and Western aesthetics, whatever that may mean nowadays, that stem from living and being educated in Paris. 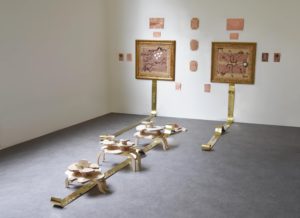 Marie-Claire has recently opened her first solo show in London at 50 Golborne, a commercial art gallery specialised in contemporary African Arts. The show presents a collection of the artist’s newest works under the title of Forces Field. The curator of the exhibition, Cedric Fauq, opposes the concept of ‘forces field’ to that of ‘artwork’s aura’ as coined by the late Walter Benjamin in The Work of Art in the Age of Mechanical Reproduction. According to Fauq, the artwork’s aura is a passive feature in the artwork whereas ‘the force field is active. It suggests strength and endurance’, and together with powerfulness, these are the feminine qualities to which society remains oblivious about and that Messouma Manlanbien’s work aims to expose and celebrate. 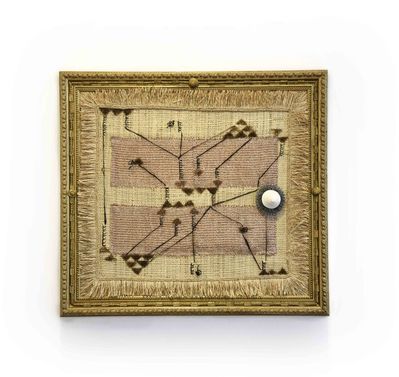 One of the most evident things when entering the exhibition is the number of recurring materials in the works on display such as brass bands, wood, scrapper sponges, raffia, resin, and hair; as mentioned earlier, the combination of these materials has to do with the artist’s intention of blending together. Broadly speaking, the exhibition encompasses a sense of equilibrium amongst its pieces: the most of them convey some sort of softness, tenderness, fragility, and vulnerability informed by the selection of materials and their natural colors. Even the scrapper sponges used in the works Women walls #2 do not feel as if out of context. This is a group of eight sculptures that reference the ‘traditional’ African wooden sculptures, in this case, representing women’s bodies. Marie-Claire creates elongated figures whose base and heads are made out of resin, and the bodies are a mixture of wood, brass and scrubbers. The choice of materials subtracts from the pieces the sense of stocky-ness characteristic of the African wooden statues, however, despite the volatile nature of these pieces, they manage to stand upright and still, like a militia of women ready to endure what is still to come. 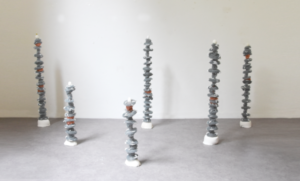 Marie-Claire utilises the scraper sponges as a signifier of ‘the universe of the kitchen and domestic work’. The artist affirms that in ‘our society there is a stereotype in which the world of the feminine is reduced to the universe of the kitchen and the domestic work’; by re-purposing the scraper sponges, a metaphor of the feminine in Messouma Manlanbien’s work, she provides the utensil with a different function, and therefore suggests alternative roles for women within the world.
Nonetheless, there are two of the works that, at first glance, makes me cringe. The first one is a polyptych of 43 scrubbers and organic hair entitled simply #Aluminum scrubbers and hair. The second one is Crown, and as its name indicates, it is a crown made out of scrapper sponges. The later could be considered inventive, but it seems rather obvious. Not only do I believe, that these two works do not add any particular visual or conceptual worth to the overall of the exhibition, but also, they are given a non-deserved prominent place within the gallery at the expense of pieces that have different layers of meaning, demonstrating the level of complexity, thought, and care that has been put into them. 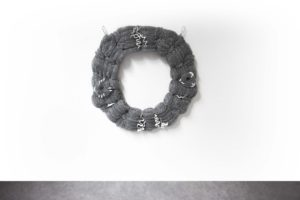 Another piece that perhaps floats alone in the midst of the show is Activation of clothing, and, contrarily to the two works discussed previously, I find this piece extremely powerful. The work is composed of the photography of a woman wearing underwear intervened with the addition of a scrapper sponge at the front, and of the display of the underwear itself next to the image. The scrubber presents an opening at the centre evoking the female vagina, the warmest, sweetest, and most welcoming receptacle for the male penis; a place to conquer. However, Messouma Manlanbien gears up this place with a cold, coarse, and intimidating entrance, a protective shield; a force field which therefore empowers the wearer. 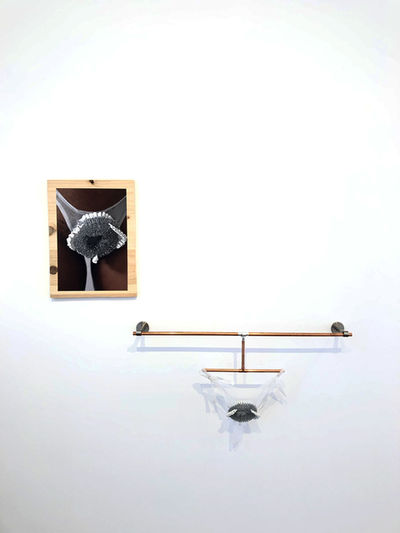 Most of Messouma Manlanbien’s works are performative pieces, whose actioning results in a video work; according to the artist ‘I immerse myself in the story of the shape (artwork) that I create, and I manipulate it, I act’. This is particularly characteristic of her series of maps, a number of tapestries made out of raffia, human hair, scrubbers and some other little elements attached that resemble female body parts such as nipples or women’s faces. The exhibition’s curator suggests that ‘the precarious geometry of these maps seem to both refer to a lost civilisation: one that’s now extinct’, but also one that is yet to come. Cedric Fauq interprets these maps as the contesting territory of the black woman’s body in continuous reconfiguration. 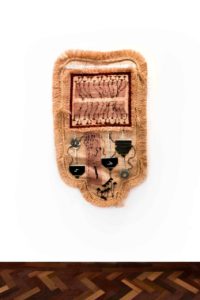 The performative aspect of Marie-Claire’s artworks quite certainly evokes the performative rituals of many African traditions, in which art objects such as masks and costumes were produced to be performed. These rituals that are still nowadays part of the popular culture of many communities and are linked to religious or spiritual beliefs. The artifacts are at once: celebratory and protective signifiers; accepting the dynamic relation between “form” and “function”, Messouma Manlanbien’s maps celebrate and guard features of the matriarchal Akan culture such as the use of nodes, which, in that culture, symbolically hides knowledge, intelligence or a secret, and indicate the different ways forward for women in the contemporary world. 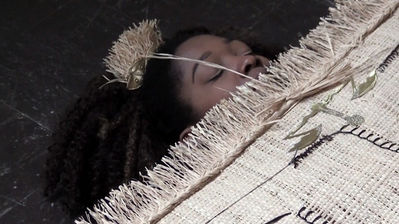 In her works Poeme en Ruban de laiton #1 and Wall Ladies #2 the performative element requires the involvement of the spectator for the completion of the work’s significance in a playful fashion: the written text is engraved on long brass plates that lie on the floor; the artist has a particular relationship with the ground that stems from the belief that ‘human beings are connected to the various elements of nature (fauna and flora), the air, the universe, and the Earth’. The text is read from left to right, from right to left, from inside out, and from upside down. The visitor is required to continuously step over the work and walk along in order to grasp the poem that Marie-Claire so carefully has engraved on the brass plates. The artist informs that the sculptured metal bands do not maintain a particular shape, but rather the modulation and the positioning of the different elements are renewed in every exhibition.

There are many aspects of Messouma Manlanbien’s work that attracted me and that I enjoyed when visiting the exhibition; probably the most obvious one is the focus on women as the central theme not only in the exhibition but in Marie-Claire’s work in general, and the prevailing stereotypes that many of us battle against on a daily basis, the acknowledgement and celebration of our foremothers teachings also moved me. I appreciated the artist’s attempt to contribute with her work to these striking debates. At a formal level, I liked the delicacy of the majority of the works, the choice and combination of materials, the colour scheme. The boldness of her discourse and her determination make of Marie-Claire Messouma Manlanbien an, undoubtedly, star on the rising. Force Fields will be open to the public until June 22 at 50 Golborne.

Born in France, Marie-Claire Messouma Manlanbien spent a good part of her childhood in Ivory Coast, where she had the opportunity living and connecting with the Akan culture. She works across a variety of mediums including drawing, sculpture, painting, video, performance, and installation. In her work, she creates stories and poetic narratives with myriad cultural influences resulting in a ‘plural identity’. Since graduating, from the Ecole National Superieure des Beaux Arts, Paris in 2016, she has exhibited widely in Paris, and was part of the 38th EVA International, Ireland’s Biennial.

Raquel Villar-Pérez is a researcher, art curator, and writer from Spain based in London. She is interested in post and decolonial discourses within contemporary art and craft practices from the Global South, mainly from Africa and Latin America and their diasporas, and how they navigate and resist the trends set by Globalisation. She is especially sensitive to women’s experiences and notions of transnational feminisms, and how contemporary art echoes them. She has curated exhibitions and public programmes for the Brunei Gallery at SOAS, University of London, the Cambridge African Film Festival, l‘Alliance Française in Málaga, Tensta konsthall in Stockholm, and others. She currently works at Tate. www.raquelvillarperez.com