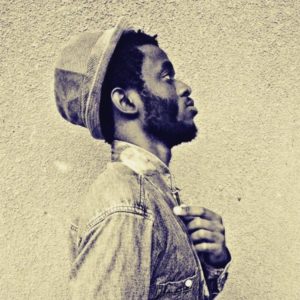 What makes the show spectacular is the originality and the experimentation with a mixture of materials. In particular, for the paintings, the artist used pieces of second-hand denim as the canvas. Employing impressionist style, with lucid and short brush strokes, the artist constantly shifts among popular faces, but his self-portrait, garnished with grandeur, is the center of most paintings.

Years have come and years have gone. And still for many of those of African descent, in the diaspora as well as the continent, there is the possibility of an immutable talk of the journey back home. Discussions on repatriation and reinvention of a Black Consciousness have inundated the cultural landscape, and Matt Kayem’s Cool Afrika is, in a modest way, an increment to the global wave of African-Renaissance. 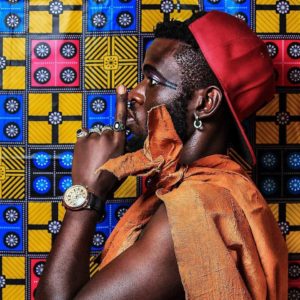 In Cool Afrika Matt Kayem, one of the apprentices from this year’s Kampala Art Biennale that was directed by Simon Njami, the illustrious Swiss-Cameroonian curator, presents three pieces of photography, an installation, and seven impressionist paintings. Hosted at the Design Hub, Kampala, Kayem’s second solo show is not only resounding because of its activism, but also scandalous owing to its indiscrete examination of fertility and stereotypes. 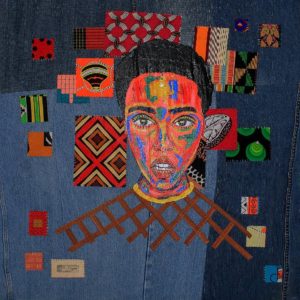 What makes the show spectacular is the originality and the experimentation with a mixture of materials. In particular, for the paintings, the artist used pieces of second-hand denim as the canvas. Employing impressionist style, with lucid and short brush strokes, the artist constantly shifts among popular faces, but his self-portrait, garnished with grandeur, is the center of most paintings.

*
In contrast, and probably as a beginning of a discovery, the show aims to combine the concept of dominant urban culture and an obliterated history of Black consciousness. From the accompanying exhibition catalog, Matt states that his aim is to reconnect to “brothers and sisters” in the diaspora – those who were violently or voluntarily displaced – and who are cultural icons scattered across metropolises in the Global North. 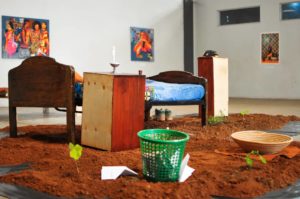 A comprihensive guide to being cool in Afrika, 2018

At the center of the exhibition space, a rectangular apportionment within the Design Hub, a repurposed warehouse, is Matt Kayem’s installation titled A comprehensive guide to being cool in Afrika. The installation includes a bed, neatly spread in a dappled, colorful covering, and transposed on a discernable map of the African continent that serves as the floor. On a small bedside cabinet burns a candle. At the foot of the bed, there is a bookshelf, populated with three historical and postcolonial texts, and a dustbin with a burnt Bible. 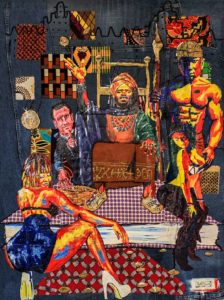 Matt says that he hoped to makes a significant statement by exploring the intersection between popular and traditional cultures. But also this installation triggers thoughts on the strangeness of relocating the bed, which belongs to a private space, into a public space as a spectacle. It is remarkable that this particular installation, in essence, extends and even nourishes the form in Doddridge Busingye’s “The Master Bedroom,” and which was on display in the Kampala Art Biennale. 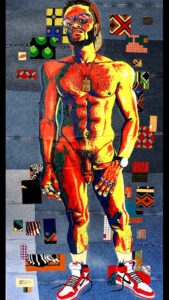 Beyond the spectacle, the show thrives as an experimental forage, as a work by a young artist. However, because of the militancy and directedness in the expressions, some can find part of the shows offending. For example, the symbolism of resisting any tool that aided colonialism and imperialism. Moreover, there are figurative, nude paintings, but these are subliminal. One can easily feel the tension of staring for a moment, in the midst of a crowd, at Kayem’s provocative The True Origin of the World or even Brilliantly Endowed.

*
Interestingly, the artist boldly uses his portrait throughout the show. And this specific element renders the work as an indication of the end of a chapter, of the end of part of an identity struggle. The roles his self-portrait occupies in the paintings are exchangeable. It only takes a flight of potent imagination. Of the seven paintings, his portrait appears in five. But this sort of repetition and exuberance that can mark the curatorial shortcomings in the show. 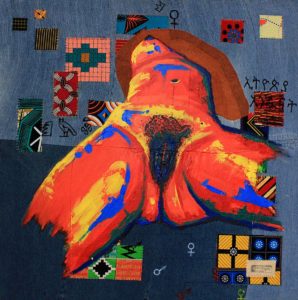 Pieces of photography on display capture the artist, garbed in bark cloth (a textile material used in the Buganda Kingdom) and in jewelry, posing and silhouetted by a patterned, kitenge background. Clearly, the photographs preserve the particular moments in the subject’s life, and here surrounded by an assortment of cultural and mystical relics. The portraits appear as pieces of a fantastical representation, and of a divided and multiple selves. 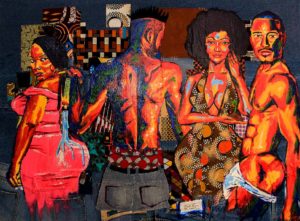 The inventiveness in Kayem’s body of works is irreproachable. However, even within the streaks of brilliance, there is a salient sense that, with a sense of economy and representation, the show would have made a greater social impact. Although the subject matter of the show is compelling, it lacked the sublime structuring of the common space. There is a sense that the work was in progress, and perhaps the impression would have been sprawling with an equally immersive, and even simulative exhibition space. Also, anchoring a show on the popular urban, African-American influenced culture, is problematic. It mainly because the popular culture is primarily an economic reaction – grounded on the consumption of specific brands.