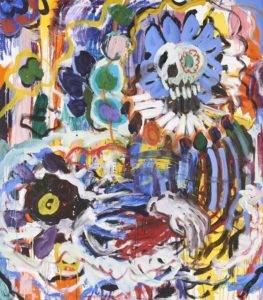 Through inundating the canvas with paint, it will be demonstrated that Masamvu through the facility of the canvas has acquired a spiritual outlet for expressing not just his emotions, but also the means to represent the body in its dynamic and corporeal forms. The artist states that this exhibition was ‘’…celebration and … a dance’’.

Themba Tsotsi on the work of the Zimbabwean artist Mischeck Masamvu

Zimbabwean visual artist Mischeck Masamvu had an exhibition at the Goodman Gallery, Cape Town. A show titled ‘’Hata’’ that began in June 2019 up until the 28th of September, an exhibition with a long run to suit the stature and reputation the artist has gained throughout his career so far. The exhibition was characterized by a theme surrounding the politics of the body in relation to psychological development. Masamvu’s work is consistent with his contemporaries like Mawande Ka Zenzile and Richard Mudariki, whose paintings function with a social and political consciousness. It will be demonstrated that this exhibition dealt with healing, as an ambiguous space of heroism and vulnerability. Like his contemporaries he discourses the issue of historic alienation in previously colonised peoples, through psychological implications, he sought to invoke aspects of collective catharsis It will be demonstrated that for Masamvu the body is a vehicle for its own freedom and healing. Through inundating the canvas with paint, it will be demonstrated that Masamvu through the facility of the canvas has acquired a spiritual outlet for expressing not just his emotions, but also the means to represent the body in its dynamic and corporeal forms. The artist states that this exhibition was ‘’…celebration and … a dance’’. This celebration will be demonstrated operated with the symbolic connotations of the body in motion as an historic vehicle, meeting the technical achievement of movement and stasis that is a feature of Masamvu’s work. 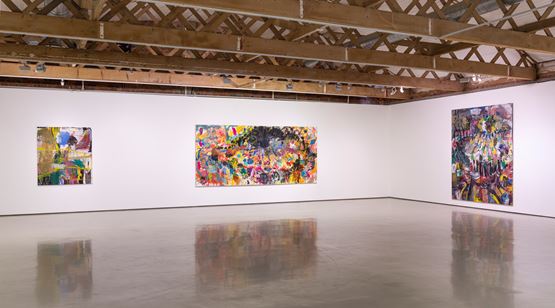 Like his contemporary Mawande Ka Zenzile who is part of the Venice Biennale South African pavilion, he is conscious of his indeginous philosophical implication behind aspects of healing. Ka Zenzile’s ‘’When you look at me my soul leaves my body’’ at the Venice Biennale is an examination of the impact of colonialism on the psyche and body of the previously colonised. Masamvu is an artist who discourses this issue utilising his bold realist inspired style. Being concerned and executing his work utilising fused elements, animals and humans in the exhibition ‘’Still Still’’ (2016) and humans and the symbolic signs of their historic subject matter in ‘’Hata’’. Masamvu was able to create works that speak to what is psychological about social development and healing. This in his previous exhibition ‘’Still, Still’’ was reflected in the piece titled ‘’Jump, spread your legs’’ a piece characterised by macabre figures monster like fishes with hands holding tridents and an armless figure with lips and no other discernible features wearing roller-skates , reflecting Masamvu’s investigation of what is hidden about the unconscious as that which can be seen.

In this exhibition, Masamvu’s departure from his contemporaries was that he created a collection in which the function of the symbolic became pronounced and active. This he achieved through his celebration of the body, as its own vehicle for healing. The measure of celebration was discerned in the piece titled ‘’Black Soul’’, a portrait piece with a man with a big Afro wearing sunglasses. The statement about pride and the propensity of the body to manifest can be discerned in the piece invoking a measure of history relating to how Black people represented themselves in the past. Depth and the foreground in the piece operate with an immediacy that is overt. This is consistent with the goals in the collection to impose a presence of expression from the body as a celebration. The strategy to use portraiture in a collection that triumphs the body imbues its discourse with an identity, this strategy also imbues the discourse with historic connotations invoking what is institutional and political about the body. 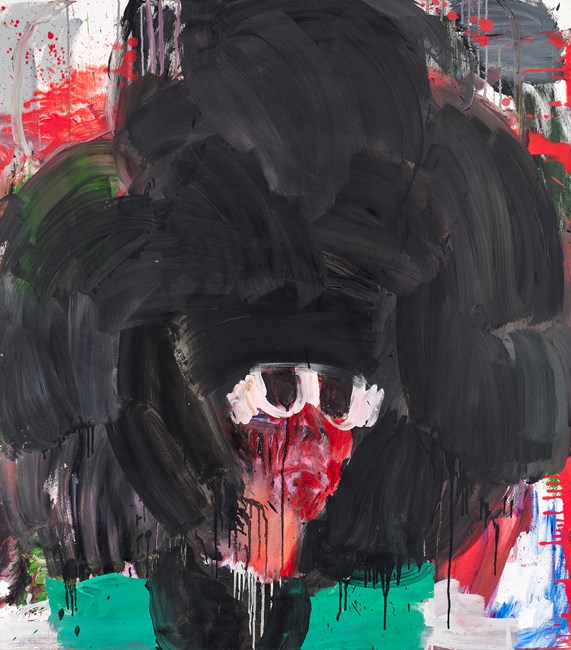 The strength of Masamvu’s voice is his crude of sense of abstraction, with piece finished with desiccated and vibrant impact. Relying on the flexibility of oil to suggest movement after it has dried; his works impose a sense of the symbolic through his technicality and his subject matter. This reflected in the piece titled ‘’Therapy Lounge’’, faces expressed in a circular shape in the middle of a landscape canvas. The drama of colour yellow, pink and red, with the anchoring point in the circular image protruding arms that rest on the heads of the faces around the canvas. The colour black plays an anchoring motif in the collection. In the piece ‘’Therapy Lounge’’ it also functions in this manner, with the arms emanating from it, executed in curt blotches around the wide canvas. Masamvu evokes a measure of collectivism in this piece, expressed without aspects of the rest of the body, the piece speaks to a sense of shared, an aspect that is necessary in the ethics of giving that informed the moral behind the theme of the exhibition. 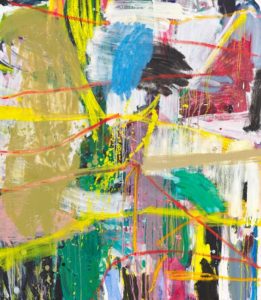 The sense of abstraction was also discerned in the piece titled ‘’Severed Relations’’, like themes that deal with the body, this titled invoked a measure of nostalgia. Masamvu incorporates this feeling into the political discourse relating to the Black body. Drooping triangles, broken squares and bold dramatic lines characterise this open piece, it was a piece that achieved the aspect of ‘’expressive brushworks’’. Connecting the body to history achieved the ambiguity of celebration and poignancy, cutting relations with family, not only pronounced the aspect of history, but it also pronounced the pain of loosing cultural roots. This articulated a measure of bodily limbo and the inheritance of arbitrary bodily relations that has been consequence colonialism. The symbolic significance of the haphazard finished impact of this piece, in contrast to the arbitrary lines communicates an intellectual space in which connections are permanent in light of the disintegrating forms the body encounters.
‘’Cat’s Cradle’’ is a piece in which the artist had to express a macabre aspect in his theme. He states that the title of the exhibition ‘’Hata’’, a Shona word that ‘’stands as a coping mechanism for the burdens we bear’’ was epitomised in the work. Characterised by an upright figure with arms extended to the sides, bold strokes of blue, black, red and a retinue of skulls and exaggerated hands. Masamvu also expressed the measure of vulnerability he designates as the dangers inherent in the necessary help that is required in the process of rescuing others in relation to the historical inheritance the Black body is subject to. The open posture of the figure with macabre images around it epitomised this aspect of the exhibition, for Masamvu’s function of abstraction it is a vulnerability operating with the ambiguity of an assumed passivity. This way the body is testament to its own agency, the exaggerating of the body parts spoke to what is symbolic about intellectual activity, in this the intellect is a mechanism to carry the body. 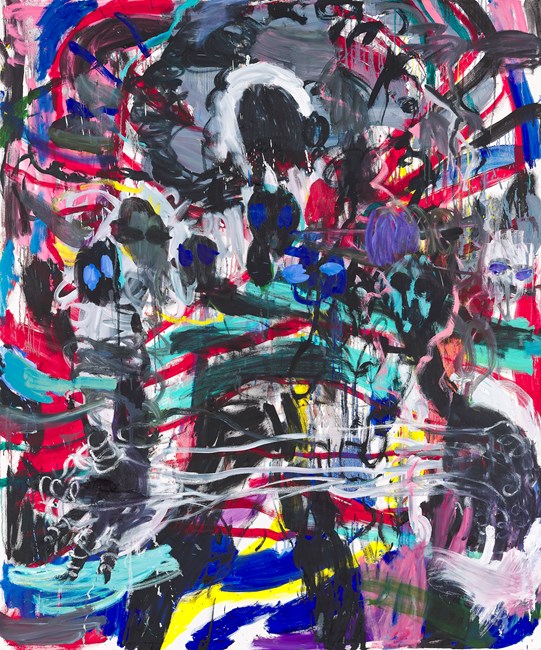 Masamvu’s this exhibition echoed the stylistic departure of his previous exhibition with the Goodman Gallery titled ‘’Still Still’’. In that collection a piece titled ‘’Gatekeepers’’ features deformed skulls, in an interview Masamvu stated that skull in his work operate like a metaphor for revealing what beneath, he even alludes to election process how choosing to vote for is like a process of elimination, like peeling what is underneath the skin to make it overt. The skull motif then functions with the ambiguity of continued inheritance for the black body, but also as a warning for the dangers one can encounter due to historically imposed subjectivities of the body.

Masmvu’s work operated with a poignancy that epitomises his oeuvre. In his previous exhibition with Goodman Gallery anthropomorphic figures, characterised an exhibition about being alienated while being in familiar contexts as reflected in the piece titled ‘’Gatekeepers’’. In ‘’Hata’’ the sense of nostalgia was continued through the cathartic connotations that underpin works like ‘’Therapy Lounge’’. The motif of the dangers of alienation in what is familiar was diminished through works that pronounced connections between different bodies, the same body as a symbol for psychological security and historic emancipation.