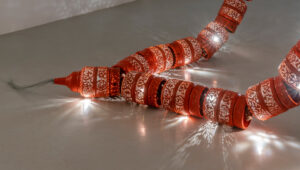 “At once as far as Angels kenn he views
The dismal Situation waste and wilde,
A Dungeon horrible, on all sides round
As one great Furnace flam’d, yet from those flames
No light, but rather darkness visible
Serv’d onely to discover sights of woe,
Regions of sorrow, doleful shades, where peace
And rest can never dwell, hope never comes
That comes to all; but torture without end
Still urges, and a fiery Deluge, fed
With ever-burning Sulphur unconsum’d.”
John Milton, Paradise Lost

Galleria Continua is delighted to present “Paradise Lost” – a new exhibition project from Moataz Nasr, curated by Simon Njami. Considered one of the most important Arab artists of the contemporary art scene, Nasr was chosen by the Egyptian Ministry of Culture and the Egyptian Supreme Council for the Arts to represent Egypt at the 57th Venice Biennial in 2017. 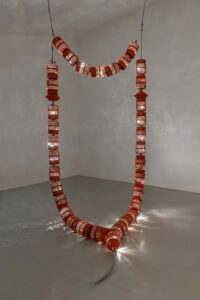 “Milton’s apocalyptic description of the world following the expulsion from the Garden of Eden is striking. Striking, because it represents a fairly faithful metaphor for this world of ours, before or without divine intervention. The world as it stands is attributable to us – to us and to our acts. To that which we have done and that which we have failed to do. Moataz Nasr’s exhibition could be viewed as a space at the intersection of hope (Paradise) and disillusionment (Hell). Its compositional elements find a strange resonance with their fictive setting: the stage of a theatre – a setting to which the structure of this former cinema’s gallery spaces affords a hallucinatory or hallucinated quality. What was in this Garden that we have heard so much about? A mountain, a river, trees, fruits, animals, a snake, and people – represented by Man and Woman. We find the mountain, the woman, the snake. The pole standing in the stalls of the cinema could represent the tree, and the structure occupying the prismatic entrance a secret passage toward a world unknown by humans. Thus, this exhibition takes the form of an initiatory voyage, an unsettling immersion in a space where the boundaries between myth and reality are blurred” (Simon Njami, 2019). 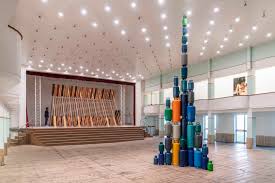 Via multiple forms of artistic expression, ranging from painting and sculpture, to photography, video and drawing, Moataz Nasr addresses social, philosophical, historical, geographical and political issues his realm of investigation starting out from Africa to encompass the rest of the world. Firmly rooted in his place of birth but blending seamlessly with broader contemporary society, the artist employs his geographical origins as pretext to go beyond political and religious borders and to project himself into a dialogue with different histories and cultures. His entire body of work expresses this desire to visualise collective dynamics, starting with a careful and sensitive documentation of personalities which are at once individual and universal. 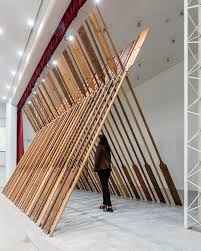 “From the beginning of time, the idea of migration in this world has been a constant pursuit in life. Human beings are constantly moving; North to South, South to North (…), the purpose of this circle of endless, restless motion has always been the same: sustenance, survival, seeking a better life,” states Moataz Nasr. Shelter, a shack made from oars and situated in the stalls area of the former cinema and theatre, offers itself as a haven which is as welcoming as it is transitory. 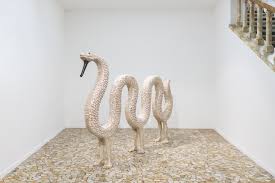 The Western and Oriental worlds merge in an exchange of knowledge and cross-contamination in a new work which is part of the Barzakh cycle: the liminal space (central to Sufi culture) associated with the crossing of a transitional space via which a transformation is triggered, bringing about a new consciousness and identity. 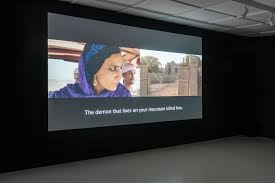 In Moataz Nasr’s work, values as absolute and unconditional as they are fragile and fleeting – such as the sanctity of freedom and its instability, along with tributes to political struggle and the defence of civil rights – evoke a universal dimension. In his video, The Mountain, the artist invites us to explore the least well-known of our primitive instincts, that of fear. A psychological dimension that can be felt by each and every human being, it transforms into prejudice when experienced collectively. Over the course of the story the artist guides us through our inability to accept the unknown and to free ourselves from the myths we create to protect ourselves; he exhorts us to seek freedom – to look beyond that which seems certain and unchangeable towards the recognition of our weaknesses and the awareness that we are able overcome them on our own.