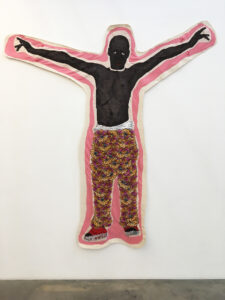 PIERRE MUKEBA
b. 1995, Bukavu, Democratic Republic of Congo.
Lives and works in Adelaide

About:
Pierre Mukeba was born in the shadows of civil war in Bukavu in the eastern Democratic Republic of the Congo. At an early age he, along with his family, was forced to flee to a refugee camp in Zambia where food was scarce. His mother discovered that her brother was doing well in Harare, the capital Zimbabwe and he invited them to come and stay. For a brief moment life was stable until the Zimbabwean president, Robert Mugabe, ordered that anybody who wasn’t a national of Zimbabwe was to be arrested. In desperation, Mukeba’s mother approached the Australian embassy for asylum. Finally, in 2006, the family were granted residency in Adelaide. 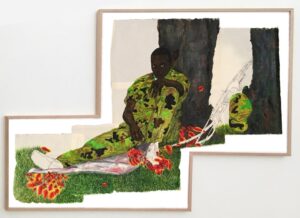 Mukeba’s passion for art grew from the period of living with his uncle. “I used to watch him build sculptures and draw”, he says. “He taught me how to draw farms, trees and people, the basics. He inherited his talent from my grandfather, who was a famous artist in Congo. My uncle inspired me to draw more until I found it had grown into a passion. With my art I have found my own technique of drawing. I learn mostly through experimenting as I go.” 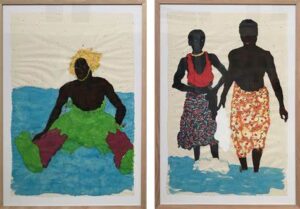 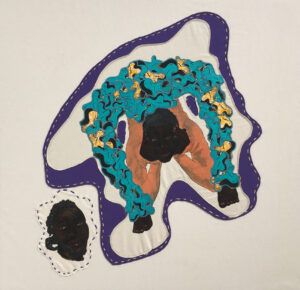 Mukeba’s first exhibition was held in 2017 and since then he has won the Churchie Award in 2017 and the Lipman Karas Peoples Choice Award in the Ramsay Prize in 2019; he’s been collected by Wyndham Regional Gallery, Shepparton Art Museum, the NGV, and the Art Gallery of South Ausrtralia. He will next exhibit in the 2020 Adelaide Biennale of Australian Art.
– Ashley Crawford, 2017 (Art Collector, Issue 79, January – March, 2017)