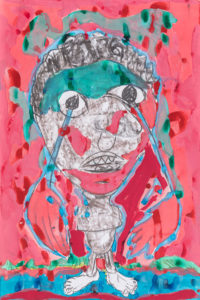 Moshekwa Langa’s work can be characterised as ‘psycho geographical mapping’, an idea that incorporated the symbolic function of the short and small brushstrokes that comprises the pieces. It also emphasises the function of the atmospheric effect of the works

Swimming Lessons after the Rains, 2018

The Stevenson Gallery in Cape Town hosted South African visual artist Moshekwa Langa’s solo exhibition. This is his second showing with the gallery since the 2018 exhibition titled ‘Ellipses’.
‘’Tropic of Capricorn” – the title of his recent exhibition – was characterised with works that continued the artist’s examination of the relationships he constructed with the various geographical areas he travelled. ‘Tropic’ was an exhibition that compared his home to the places he travelled. 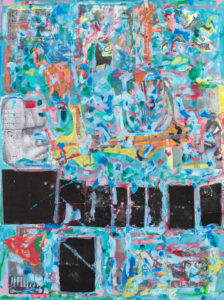 This article will examine how the sense of the elliptical images can be compared to a measure of home as a transient emotional experience. His exhibition at 55 Walker Street in New York in January 2019 organised by Stevenson and Andrew Kreps Gallery, featured the artist works from the ‘Love Letters’ collection, continued the theme of emotional cartographies and the transient relationships he established on his travels. By connecting works from these ‘Love Letters’ collection, it will be demonstrated that when compared with his this exhibition, the pieces function with a short and concise impact. This not only renders how it interacts with the surface of the canvas with a measure of depth and immediacy that is compact and demarcated. It also enabled the artist to depict the images that express his feelings with an impression of altered realism. The atmospheric impact of the works will be demonstrated to express a measure of experience that was non-physical rather than expressing the limitations of what was physical. This way the works express how the artist used symbolism or non-physical elements to express the psychological impact of travel, and his feelings for what has past. 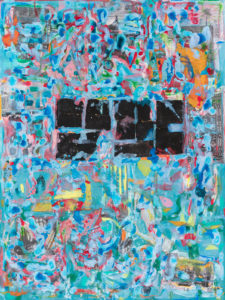 The ‘’Tropic of Capricorn’’ exhibition featured new works that ranged from collages, portraiture and paintings on paper. Langa in this exhibition was interested in how painting surface accommodate emotional reactions to his immediate surroundings. The result of his themes was that works had the finished impact of a transient encounter; works were executed with bold and curt strokes, with the surfaces inundated. This strategy created the impression of the demarcated and compact, rendering the pieces atmospheric and bear. The question his works asked was how does one create an emotional map? Once that map has been traced, what meaning could the audience get from it? The elliptical blotches in the abstract forms that comprise his work articulated a measure of encased transience. The pieces encompassed a specific feeling without the pragmatic specificity of a map. The strategy of the blotches created an impression of place that felt rather than expressing a physical experience. It is a strategy of abstraction that demonstrated that tracing one’s steps created an emotional map. Instead of mapping them out and creating a context in which what is emotional discoursed what is political. In that what is political can encompass a measure of permanence and difference with a particular space or place. 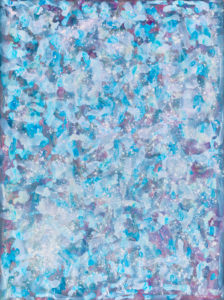 One piece tilted ‘’Ga-Rameeste’’, executed with a portraiture frame, expresses this measure of inundation and ellipses or atmosphere and compact. Langa was conscious of the emotional breakdown that ensues when one is leaving a place or even their home, he was also conscious of the elusive meaning that encompasses traveling. The piece has a blue background, with a variety of colors pink, grey and red that creates an effect of movement and stillness, an effect symbolic of the hidden feelings of nostalgia for home and other places to travel. The strategy also infused in the symbolic function of color a measure of expectation that is divided in order for memories to be represented as energy. 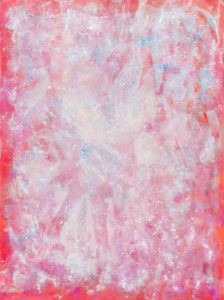 Langa’s work can be characterised as ‘psycho geographical mapping’, an idea that incorporated the symbolic function of the short and small brushstrokes that comprises the pieces. It also emphasises the function of the atmospheric effect of the works. Another piece titled ‘’Ga-Maphotho’’ anchored by a pink background, finished with a pale grey and the color blue scattered throughout the canvas, brought to mind another aspect in the geographical relationships that the artist has established in his work travelling. The pale grey color implies a lack of clarity; this symbolic function could be extended to physical manifestations in the geographical space. The image of a fog with its implications for the unconscious relies on the use of blotches as traces for his travels, while making clear the impact of the relative distance between what can be percieved and cannot be percieved. 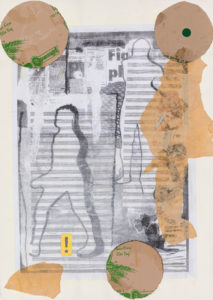 Figure in a landscape with potholes, 2018.

The piece titled ‘’Figure in a landscape with potholes’’ resounds with a sense of nostalgia. It is a piece finished with a collage effect. A clear silhouette figure in the middle of the work articulates what is intangible about the particular landscape, the aspects in it that cannot be moved. Langa was conscious of how emotions regarding a particular space are characterised by a measure of form and rigidity. Rather the piece expresses short-term travel as a psychological marker. It is a piece that expresses how even land marks could be characterised by what is frail, which can inform what is universal. 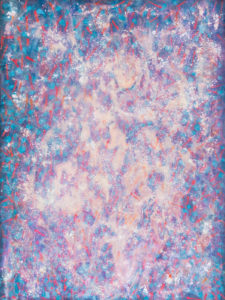 The function of the depth of the canvas could be juxtaposed with the relativism of depth and immediacy in the unconscious and the relativism of a transient home. Mapping out what is conscious is an exercise in a clear opacity. The ‘’Love Letters’’ series expresses another aspect in the artist’s psycho-geography project. In 2019 the works were exhibited at the 55 Walker Street in New York, a show that was organised by Stevenson and the Andrew Kreps Gallery. It featured two other artists from the Stevenson stable: Vivianne Sassen and Zimbabwean artist Portia Zvavahera. The works in ‘’Love Letters’’ VII, VIII and X were finished with a unified effect. The white color painted over an abstract background, articulates an aspect of the psycho-geography project that is personal and intimate. They are works that marked important names, places and events in the artist’s life. In the ‘Love Letters’ collection what is intimate is connected to the rest of the narrative of his travels through the use of a unifying color. This strategy diminishes the impact of compact delicacy and breakdown that characterises the works in the ‘’Tropic of Capricorn’’ exhibition. It rather demonstrates how what is concrete can only be imbued with meaning in relation to other contexts. ‘’Tropic of Capricorn’’ exhibited this, by incorporating works that featured intimate and private aspects of the artist’s feelings.

The exhibition was an expression of oceans of emotions in a life characterised by transience and the delicacy of single step, accumulating into spurts of clear opaque emotions expressed through art.