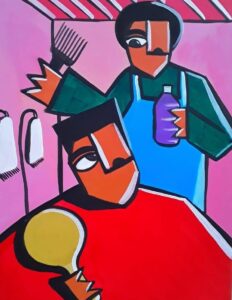 The work of Levy Pooe is beautiful and agonizing at the same time depending on your sensibilities. It is layered and many things at the same time. It presents a mirror for you to look at and decide what you see, but remember reflections are not always accurate.

Mbe Mbhele on the work of Levy Pooe

(and what a gallery should be)

Instantly at a point of crises as I enter the Bag Factory gallery, I am an unimpressed. Not by the art hanging on the walls but at the apparent pretentiousness in the space. Nappy heads walk around with glasses of wine, speaking through the nasal and pointing at the colorful paintings on the walls. A couple of middle aged white people who look dazed and amused stand in front of some of the paintings, smiling at everyone who makes eye contact. This is a familiar sight in art galleries, where people gather to ‘appreciate’ art and every now and then purchase it but often to indulge on free wine, snacks and chats. The artworks on the wall are usually created in response to what galleries want, what sells and what does not. (1) It is rarely about what the artist really wants to say or what the artist cannot afford not to say. After all artists must eat right? But this schema is dangerous because in a way it undermines the multiple potentialities of what art can do and renders it nothing but a commodity.
But what else can the gallery as we know it do? What should it be doing? These are not new questions but perhaps they need to be revisited if we are to salvage the gallery from being a space where the rich feed their insatiable desires of gazing and investing. Where the middle-class feeds their sensibilities and convince themselves of their proximity to what has become known as ‘a soft life’. Often all of this happens through the exploitation of the experiences of those who poor and in the margins. The works that often get exhibited speak of/on poverty, suffering, violence but the hypocrisy is that the people being spoken of do not even know that they are represented in these ways; they do not know that their suffering can be consumed for pleasure and enjoyment of the other. The ways in which people and their experiences are visualized is very important and this must be evident in the organization of what is called an exhibition. 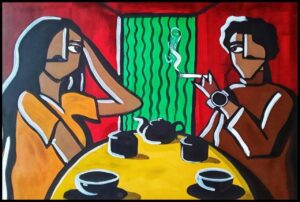 It is the exhibition of Levy Pooe winner of the 2020 Cassier Welz award. The award is named after Reinhold Cassier and Stephan Welz who were doyens of selling pieces of art to rich people making artworks an exclusive preserve of a certain class in exclusion of another. Fine art auctioneers is what they call them. (2) The exhibition is hosted at the Bag Factory Studios which was created around 1991 to support local visual artists, to encourage international network and to fill the gaps in art education. (3) But the studios are situated at the fringes of Newtown, a place mostly known by and accessible to tertiary institutions students around the area. Space is political, where a place is situated has much to do with who must access it and who should not. It is not enough for the work to be engaged by those who could easily access the gallery. We have to imagine inclusive means of engaging and foregrounding art and dialogues around it. 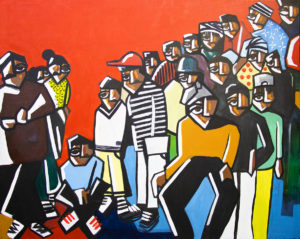 Hard to speak of style as there is always already a confluence and overlap. A close reading of the work of Pooe reveals elements of cubism which is arbitrarily attributed as Picasso’s invention. (4) We know very well that in Africa people had already started using that format to create visual art. There is also the precision and rhythm of the style made famous by Gerald Sekoto, Pooe agrees he has been a big influence in the development of his style. Pooe uses a lot of bright colors while speaking on grim subjects such that one has to look closely to understand what is being said by his work. One wonders if Pooe stumbled on this technique or whether he uses it as a metaphor to speak about the state of affairs in South Africa. Where the country looks bright and ‘beautiful in its diversity’ while hierarchies and the subjection of the brutal apartheid regime have not really changed. Where black people are still ‘tenants’ in their country of birth. (5)

*
Mphe mphe ya lapisa – motho o kgona ke sagagwe is the title of the exhibition. The title is borrowed from a seTswana saying which can be translated as “constantly begging is tiring; a person is a person through having their own’. But the translation eats away the nuance of the saying and to understand it with its many layers and interpretation you have to understand Tswana. But let us work with the translation (with its limitations): In the work of Levy it is quite clear who is doing the begging. Black people are the subjects subjected to a perpetual state of not having and so their entire lives they have to negotiate life as people with no relation to property. (6) This is truth is encapsulated in the exhibition whose entire motif is centered around the perpetual state of lack, economically, physically and spiritually. 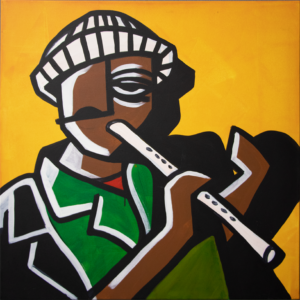 Are you still a person if your entire existence is characterized by not having? A deep reading of what Levy could be doing through his work is the questioning of the very ontology of black people. If you become a person through having then according to Levy’s work then one always without ceases to be a person. If the grounds for being a person is having some sense of relation to property then he one without deals with existence outside the demarcations of humanity and humanness. (7) It is this terror that we constantly have to deal with. (8) 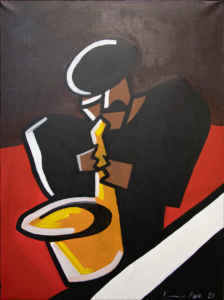 If indeed this is what Levy is dealing with then why is it that some of his works suggest that black people beg for petty things. What really are the aspirations of these people that beg, what are they begging for? Are their ambitions being assimilated into the existing (broken) system or is there something much more profound that they desire? Levy has paintings titled Busking in the City (1) and (2) and in these paintings jazz players are seen playing their instruments. Quite clear trying to make some small cash; that is what busking is after all. In another one titled Kopa ungfake VIP a group of people barricaded by a fence are trying to enter another side where a couple of people are sitting on chairs with drinks on their table. Quite common in parties, VIP areas are a signifier of a particular class and status. 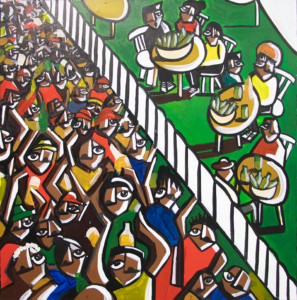 Does Levy know that class among black people is an illusory concept? (9) In the eyes of the world that matters black people are oppressed because they are black not because the other has access to VIP and the other does not. Etsene R350 is beautiful with perfect brush strokes and shows a group of people standing waiting for the unemployment grant the government dispensed during Covid. Could Levy be critiquing the kind of things that black people desire? Maybe he is saying begging for a trivial things is tiring because it solves nothing. I quickly grow tired of thinking about these images mounted on a depressing grey wall. I wanted to find out who the curator is but my need to get out and get a beer is stronger. 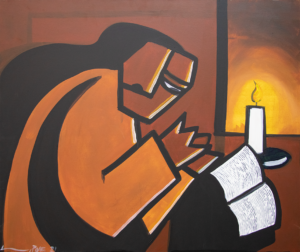 On my way out I glimpse at a painting of a praying woman titled Thapelo, some small size linocuts which are Untitled. The work of Levy Pooe is beautiful and agonizing at the same time depending on your sensibilities. It is layered and many things at the same time. It presents a mirror for you to look at and decide what you see, but remember reflections are not always accurate. The longer you stare the more you appreciate the detail not just of his technique but of how his work always reveals ‘a thing and its doubles’. (10) He is undoubtedly one of the country’s most promising artists. But a question I am most interested in is what the work of a gallery should be in a collapsing country such as South Africa.

9. Frank B. Wilderson, III Incognegro: A Memoir of Exile and Apartheid (2008)