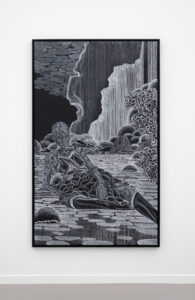 Using only drawing materials such as pencil and charcoal, Ojih Odutola tackles the body of work much like a poem or novel. The artist was said to spend months crafting images that created a structure similar to chapters of a novel.

A Countervailing Theory was set to be Toyin Ojih Odutola’s first UK commission. Premiering at the Barbican Centre, the Nigerian-American artist was exhibiting new work focusing on drawing as a form of storytelling. Although nationwide lockdowns cancelled the event, the exhibition still had a story to tell.

Using only drawing materials such as pencil and charcoal, Ojih Odutola tackles the body of work much like a poem or novel. The artist was said to spend months crafting images that created a structure similar to chapters of a novel. Referring to ancient history, myth, politics and pop culture, these visual fragments exist as a standalone episode but also invite the viewer to connect into a wider cohesive narrative.

Spread across the 90-metre long gallery the installation features 40 drawings in chalk, pastel, charcoal. In them she tells a fictional myth of a prehistoric community set in the Plateau State in central Nigeria. Matriarchy rules in this world, with men as the supporting acts and the work explores the power dynamics of the subjects.

Speaking of her impression of the venue Ojih Odutola recalls, “Walking into The Curve for the first time was an enchanting experience of having a space unfold as you travel through it, not quite knowing what will come around the corner. The feeling of possibility it provides to create and exhibit a story one can meander through in real-time gifted so much promise in how to engage with an audience…I hope in the process of experiencing A Countervailing Theory, one finds new ways of engaging with…eclectic forms of storytelling, and all the potential art-making gifts us.” 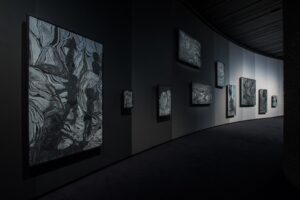 Eclectic storytelling is what the Nigerian-born artist explores. Her previous work examined the malleability of identity. It included detailing of skin, texture and blended layers to create characters that were luminous and radiant, allowing her previous work to achieve a signature style. Her landscapes revealed narrative details that evoked an intimate experience for audiences. All these elements can also be found in A Countervailing Theory.

Jane Alison, Head of Visual Arts for the Barbican, comments that Ojih Odutola’s work and “engagement with the space as a canvas for her expansive narratives will undoubtedly be a revelation for many.”

One of the iconic pieces from the collection features two lovers locked in an embracing kiss. Entitled A Parting Gift; Hers and Hers, Only, the subject’s skin contains light and dark elements lending to the luminous shimmer Ojih Odutola’s work is famed for. This gives off an almost water-like quality to their skin so that it appears both solid and liquid. The earrings/ear jewellery anchors the aesthetic as familiar to our society. However it is ambiguous whether their “hair” is actually hair or skin-like protusions on their heads. This gives the subjects an alternative humanoid appearance. Although one figure is obviously female, the other is more androgynous but the title suggest two females in the frame. This further subverts the hetero-normative narrative of our world and feeds into the female-centric storytelling of Ojih Odutola’s Plateau State. 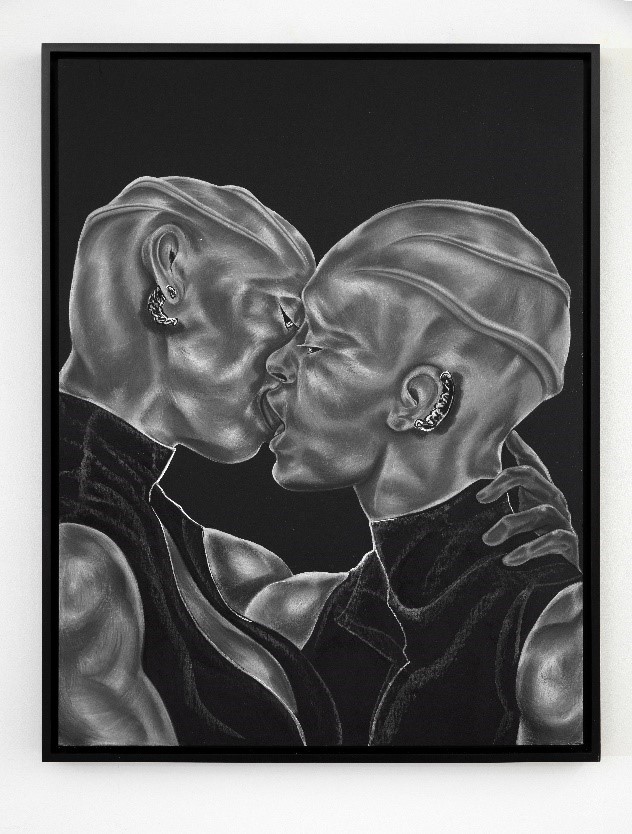 Another interesting piece is called To Be Chosen and Not Known shown below. Here two females spot a male ahead of them. They are in an area populated by large fruits that resemble melons or pumpkins. The male who appears naked is dragging supplies in the other direction. The title suggests that he is totally oblivious to being selected by the females. His subservience is demonstrated by the labour he is performing and the women’s clothing promote them to a higher rank than him. As a viewer one may speculate what he has been chosen for. In a matriarchal community where men are seen as the lesser, the audience begins to ask themselves of what use are these men kept for in the Plateau State? 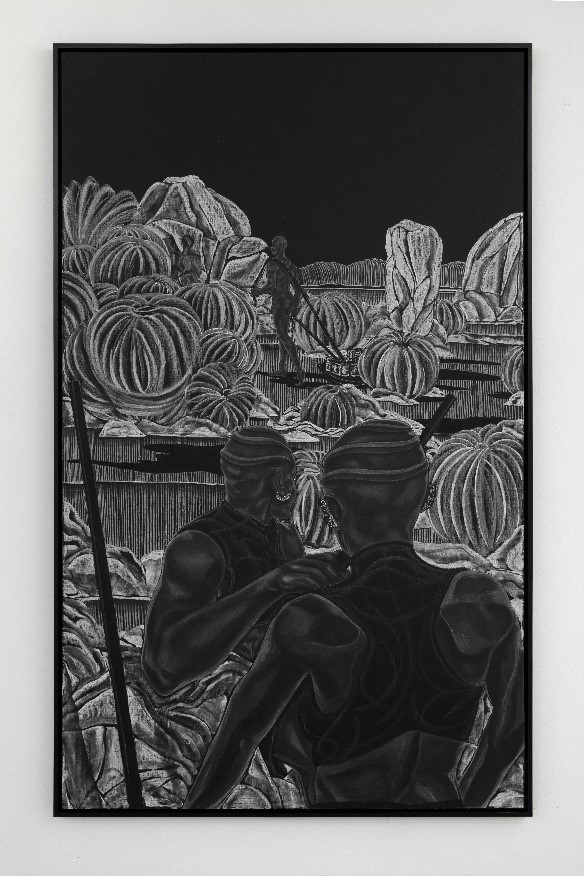 This is How You Were Born goes on to suggest that answer. A pair of hands caresses an embryonic sack. Within it is a foetus with a cord – maybe an umbillical cord – attached to something out of the frame. This is an alternate form of conception and gestation and we postulate that men also serve for this purpose. Ojih Odutola plays with depth here by positioning other sacks in the foreground and background, revealing several foetuses are in gestation at a time. With this form of conception, the Plateau State is both fantastical and yet subversive. Throughout our history and in speculative fiction, male-dominated communities have been presented through media, whether they are religiously led or in a dystopian narrative. In the centre of this form of patriarchy is the idea that a few males are able to impregnate several females at one time in order to further the species. This has been the justification of male “superiority” and thus patriarchal subjugation of females as the supporting party. Women are the chattels to breed with. They are dehumanised as stock. Therefore does the subversion in A Countervailing Theory threaten these established norms of patriarchy? How does each picture as a peephole into their world affect the Male Gaze? The narrative flips a norm on its head and asks its audience what society would be like if women achieved this type of community and reproductive function. 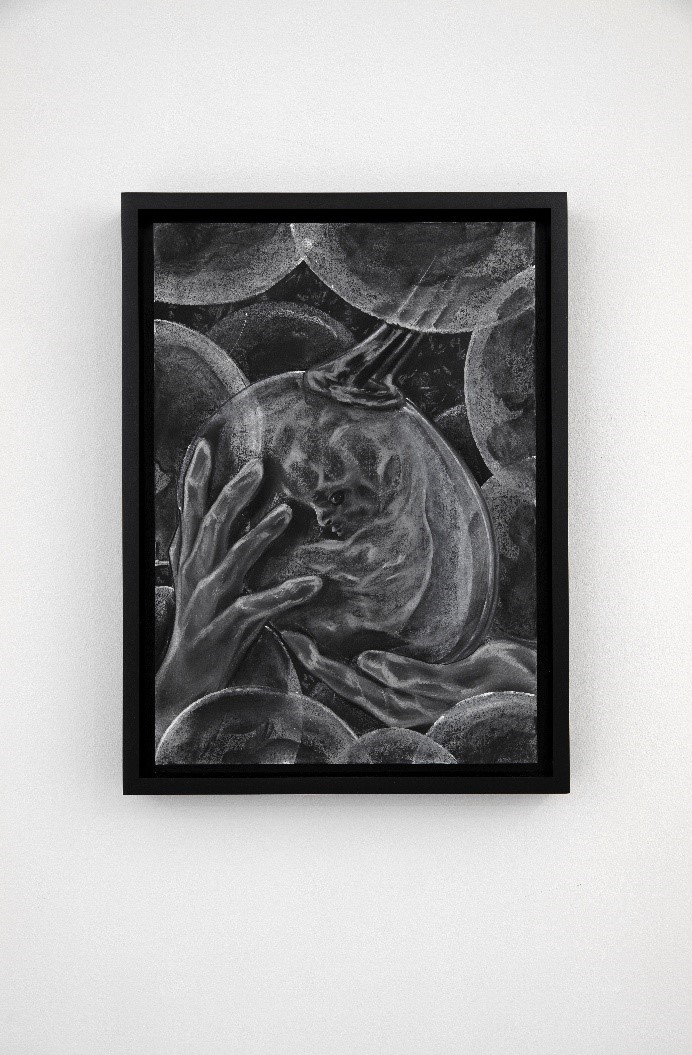 A Countervailing Theory is a fascinating journey into an alternative universe. In a society such as ours, it is an artistic glimpse into what life would be like if the “Others” of our world were the status quo. The Plateau State is female-centric, black-centric, queer-centric and positions the community living more in touch with nature and more advanced with science than we currently are. In all the ways it exists in opposition to our contemporary world. It also interrogates the role of men in our world by reflecting on the role of men in this fictional narrative. By means of visual exposition, Ojih Odutola’s work cuts men out of reproduction. So perhaps we wonder what men really are needed for. By deconstructing a fundamental question like that, we reflect on how warped and damaging the patriarchy really is for us. Men themselves are also victims to this when they see themselves as only physical beings useful for labour and sex. This disconnects them from their Divine Masculine nature, which is the complementary equal to the Divine Feminine.

The alternative narrative posed in A Countervailing Theory purposefully does not present a unification of these two in order to demonstrate this dysfunction.
Perhaps the revelation for many are the unconscious power dynamics which exists in our reality. If we can champion the superiority of women in A Countervailing Theory it is because we can see how women are the underdogs in our society. If we see the women as the overlords of the Plateau State then we can see how patriarchy occupies those roles in our communities. The definition of “countervailing” means “offsetting an effect by countering it with something of equal force”. Thus the Plateau State is our own world’s parallel and it is only when we heal the dysfunctions that exist in that parallel world and our own that humankind will exist in harmony.