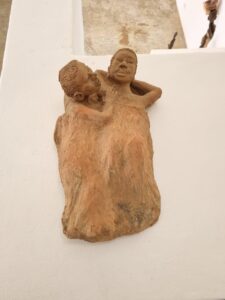 The title of the exhibition series, Shaping Dreams, in the final analysis, emphasises Mabasa’s hand in the work’s making, her role as a mentor, and her determination to carve out a place for herself and her steadily vanishing belief system in an otherwise hostile or indifferent world. At the same time, it asks that we question our own myth-making processes, and provides an opportunity to let the artist and her work speak for themselves.

James Sey about the work of the South African Noria Mabasa

Noria Mabasa is one of South Africa’s most important sculptors, as well as one of the most important surviving artists from a tradition that goes back to the beginnings of South African society. Her work serves very important social, religious and imaginative functions in her own community, and through its existence as fine art, serves to elevate South African visual culture and heritage as well. At 84 years old, she is still active and has an incredible body of work behind her. She Is nothing short of a national treasure. The question of the official respect paid to and the care taken of such crucial figures in South Africa’s cultural heritage remains a vexed one, but an ongoing programme facilitating and honouring Mabasa’s work at least has the official support of the country’s Department of Arts and Culture. 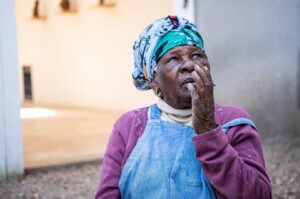 Noria Mabasa: Shaping Dreams is a ground-breaking programme comprised of a working residency, a series of workshops with learners of different ages, and an exhibition in the Residency Studio of the Nirox Foundation of 38 pre-existing works in both clay and wood, produced between 2004 and 2022. The programme forms the background work of an ongoing project that culminates in a larger exhibition at the Villa-Legodi Centre for Sculpture at Nirox Sculpture Park, just outside Johannesburg, in late September this year. The first iteration of the exhibition opened to the public in May this year, which also marked the first time the artist has spoken publically about her work in over a decade. The public discussion, partly facilitated by Sven Christian, the show’s curator, is important because much of the artist’s approach to her work and her standing in her rural community is orally transmitted and is in danger of being lost if her work is not properly documented and archived. 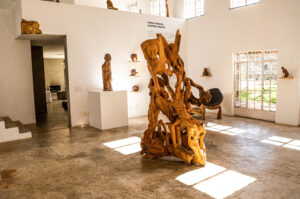 Noria Mabasa has been making art for almost half a century, yet public knowledge of her work is still very limited, framed by a handful of people who sought to revise the exclusionary nature of South Africa’s institutions in the mid-to-late 1980s and integrate her work into the commercial sphere. In 1985, her art was included in the benchmark exhibition Tributaries. This was curated at MuseumAfrica in downtown Johannesburg by artist and curator Ricky Burnett to explicitly bring together urban, networked artists, both black and white, with rural artists, often from a craft tradition, who would not normally exhibit in a gallery context. Partly as a result of this exposure, Mabasa’s work became critically categorised as ‘rural transitional,’ a framework that, according to academic and curator Dir. Same Mdluli, has had a lasting impact on the reception of her work. Unable to grasp the full complexity of her practice, yet eager to find a home for it within the canon of South African art, curators in the fine art world used the term ‘transitional’ to apply to works that did not fit neatly into pre-existing categories such as ‘traditional’ or ‘modern’, but were thought to occupy a liminal zone between the two. Similarly, the term ‘rural’ — which is often associated with tradition (and therefore, the past) — presented a romanticised view of her work, untainted by the world at large or the passage of time. Framed through a Eurocentric lens, such categories have led to a variety of misconceptions. Chief among these is the nature of Mabasa’s creative process itself, which is under two sets of pressures. Firstly, she is a creative woman working in a deeply patriarchal traditional society. Secondly, her work is valued and collected in a society in which the creative process Mabasa is driven by, primarily the communication with her ancestors in the form of dreams, is little understood. 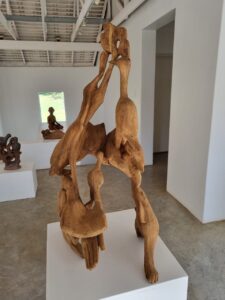 In this critical framework Mabasa’s work becomes at once exoticised and primitivized, much like the work of another famous Limpopo sculptor, Jackson Hlungwani. Hlungwani’s own influences are drawn from a highly personal and idiosyncratic set of mythological and religious references and beliefs, culminating in the establishment of a church and a shrine replete with his monumental wooden carvings. The social and spiritual meanings attached to these, and his sculpture itself, are not all easily available to Western art criticism. Largely self-taught, both Hlungwani and Mabasa straddle two worlds where their practice has immediate aesthetic meanings, but also a more recondite set of meanings accessible only through spiritual belief and their folk traditions, including direct communication with the ancestors.

For the understanding of the importance of Mabasa’s work to South Africa’s cultural heritage, a further complicating factor is that previous critical readings of her work have tended to emphasise the artist’s ethnicity and the mythological associations of her practice at the expense of her everyday lived experience. Instead of attributing the place of crocodiles in her work to their mythological resonance, for example, Mabasa tells the story of how her granddaughter narrowly escaped the clutches of a large crocodile, and how she was witness to a man being pulled under by another, surfacing moments later while still being held in the reptile’s jaws. Such stories open up a complex world of different interpretations that help to ground readings of the artist’s practice in the everyday. To this end, the current 2022 exhibition series under the rubric Shaping Dreams asks what assumptions we bring to the work of Noria Mabasa, questioning the extent to which our knowledge is informed by things that have little to do with the artist. 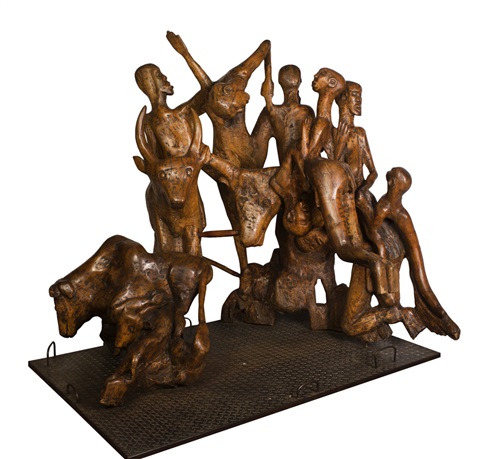 Its title acknowledges the artist’s dreams as a source of inspiration, an aspect that also links her practice to the good health of her own body (she speaks of becoming sick if she does not act on her dreams by undertaking her sculptures) and provides her with a connection to her ancestors and her community. While Mabasa’s sadly rare pronouncements on her own work make it clear that this dream process – listening to the ancestors through the medium of dreams and following their instructions or signs in her work – is to be understood entirely literally, art critics often fall back on to the idea of ‘magical thinking’ as inspiration. The difficulty is compounded when such work in a fine art context becomes associated, as it often is, with ‘outsider art’ by virtue of its unfamiliar frame of reference and the artist’s often self-taught status. By contrast, Mabasa is acutely aware of her position in the South African art canon, contributing to commercial exhibitions and collections freely – including work donated to the world-famous South African Constitutional Court Art Collection. The liminal position of such artists, it is to be hoped, will not result in their vital position in the cultural life of the country becoming neglected, as Hlungwani’s legacy has been. The South African government is undertaking steps to protect the heritage legacy of Mabasa’s work, and this is a crucial process.

The title of the exhibition series, in the final analysis, emphasises Mabasa’s hand in the work’s making, her role as a mentor, and her determination to carve out a place for herself and her steadily vanishing belief system in an otherwise hostile or indifferent world. At the same time, it asks that we question our own myth-making processes, and provides an opportunity to let the artist and her work speak for themselves.