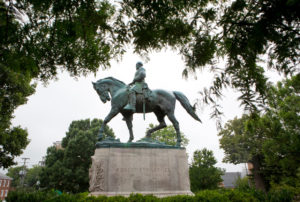 Arturo Desimone (1984), artist, writer, poet from Aruba wrote two poems for Heather Heyer, who was killed in a clash between protesters in Charlottesville, Virginia, August 2017.

“These two political poems I first wrote as elegies responding to the death of a young woman – Heather Heyer – who was killed in a clash between protesters in Charlottesville, Virginia, August 2017. Mobs of young right wing activists rioted against the removal of the stone monument dedicated to Robert Edward Lee, the Confederate general in the Civil War, on horseback.

My idea is to present a combination of the poems, which feature the stone horses of the confederate statue, with artworks by known black American artists in which they depict themes of the American Civil War and horses.

Surprisingly, it turned out to be quite a popular theme: hard to find a single important black figurative artist in the USA who does not feature horses prominently in paintings and drawings! From Harlem Renaissance artist Aaron Douglas, to Kara Walker, Purvis Young and Henry Taylor Moore, they all have some image with a horse.” 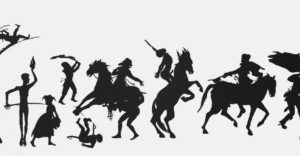 A Vision for Heather Heyer (*but not CNN )

~after Amir Gilboa
and after the events in Charlottesville 2017~

When I see a stone and say stone,
they say “stone”
When I see wood and say wood,
they nod, “wooden.”
When I see horses of stone gallop
they say True,
but not
Underwater.
But when I see blood,
and say I “blood”
they say “paint.”
The horses of stone do not gallop
upon prairie.
Rather, they sit
and wait,
in the garden of history
and devalued currency.

Behind the wheel of the car,
sits a boy whose neurons burn
in his scalp,
devalued stars (dixie) of fortune
on his scalp
and on his dust-dimmed
license plate.
Mule-ass of metal,
gallop upon grass,
/rubber-tire trek fast
split cranium,
cortex sounds to him
like an cream cone fallen
on the road,
A watchman says “Please
do not walk upon the grass,
Sir/Madam— there is a fine.”

When I see blood and I say blood,
they say Paint.
They ask me my profession—
“Painter of martyrs,” I lie.
They say go to WalMart,
See martyrs
on sale, devices hanging
next to them, and phones, I phones–
They ask whether I will paint
upon their great stone steeds,
with that same paint I,
blasphemed naming it “blood.”
They interrogate, check–
to see if I am a menace.
I answer, tis not necessary,
dear Jack, Wade, Dylan and Dennis—
what with the fountain of blood
Haemoglobin-red of electrified
flags not-dixie,
plasma-yellow of riderless star—
already flowing from horse’s thorax
of broken stone of sorrow,
stripped of saviours
and of riders–

Young ranchers do not dare contain
the blood,
by throwing a gray car-floor carpet
over the equine neck of stone, to dam it.
From the wreckage, a fountain springs,
of Heyer hot hemoglobin and plasma
irrigating a desert, by painted mountains
West of
West Iraq, down road from
Best Western Charlerotsville,
they run between ranches, satellites and cars
of long-defeated Confederate cavalry, Wal-Martyrs
of the discount ammo section,
and pray, fearing contamination,
all their scalps out on their necklaces,
false rosaries ring
the shaven skulls of protesters,
They pray to a saddled,
riderless star,
for the return of the thwarted war–
for the sheriffs
of good days gone.

Robert E. Lee opposing monuments to the Confederacy, in a letter written in 1869.: “I think it wise not to keep open the sores of war but to follow the examples of those nations who endeavored to obliterate the marks of civil strife, to commit to oblivion the feelings engendered.” 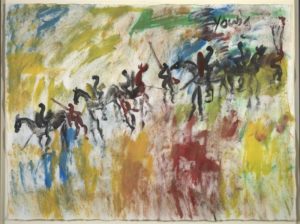 WHAT I DID NOT TELL THE
ADVERSARY IN CHARLOTTESVILLE

“Testify!’’ they say, pointing
cellular devices and hot knives,
and I fear the latter less,
though knives also resonate—
But I remain steadfast,
will not betray witness
Of having seen the horses of stone go
drink by the nocturnal riverbank,
they licked the surface-membrane
of the maned, starlit water.
A throng of men in the darkness
looked on, hoping that by imitating
men’s equine relatives, drinking
from the river, they would either lose
their memories,
or become winged centaurs,
to gallop vertical/ up into nightsky–
the hell out of here, Charlottesville:
brokenville, without virtue.
I do not betray,
having seen no sword,
by X-ray in any
of the 5 bright stomachs
of nocturnal horse or centaur
of stone.
O saddled, riderless star–
Come, testify.
The blinders now blink
on the human heads below,
try to compete with the lights
of furthest-sailed stars—
which schoolchildren learn
are only signals,
of the dead galaxies, obsolete
light-years ago,
Confederations of extinct and distant suns,
desperate telegrams of those
long since mired-dead in trenches.

If the stone equines have vanished
from the stable by lit morning,
this time their failed guardians
can no longer blame the dead girl,
Heather, Heyer, twice run-over—
neither government nor Jack Daniels
wield such sorcery.
Believe me, Jury, the nighthorses sprouted
wings of stone, galloping upwards
in night-fugue, away from small wars
of dullards’ nostalgia,
leaving two-legged dunces to squabble
over rusted Confederacy badges, pinheads
with so much tetanus,
and so little love to give. 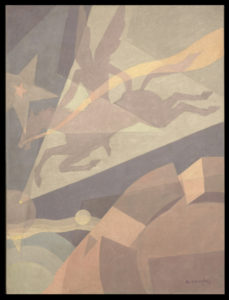 Arturo Desimone (1984) is an artist, writer, poet from Aruba.