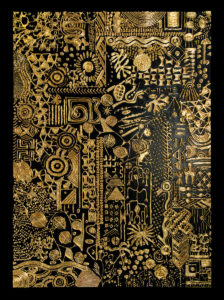 Enthusiast of 24-karat gold or not, what is undeniable is that Lina Iris Viktor’s work provides with food for thought; she graciously interweaves complex aesthetics with conceptual and political commitment.

Autograph has on display the first major solo exhibition in London of Lina Iris Viktor entitled Some Are Born to Endless Night – Dark Matter. Running until 25 January 2020, the show presents a survey of well-known pieces from the series A Haven. A Hell. A Dream Deferred, which I won’t talk about in that text, and lesser known works such as Constellations, Materia Prima, and Dark Continent, an ongoing series for which Autograph has commissioned four new works. 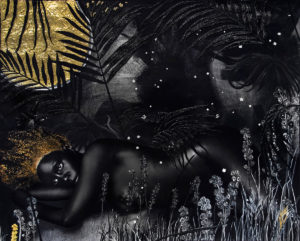 Lina Iris Viktor, II. For Some Are Born to Endless Night. Dark Matter. From the series Dark Continent: The Seven, 2015-9. Courtesy of the artist and Mariane Ibrahim Gallery.

A welcoming quote by the artist at the foyer of the Rivington Place building already distils what visitors are going to encounter a few steps later in the ground floor gallery: ‘I only see the absolute beauty and the depth of black… Black to me is the proverbial ‘materia prima’: the first matter, blackness as source, the dark matter that birthed everything’. Not surprisingly, the use of black, the many grades of blackness, hues, nuances, and glares is at the forefront of this immersive exhibition; it takes over the canvas space, invades the gallery, and is only interrupted by glitches of gold and white. 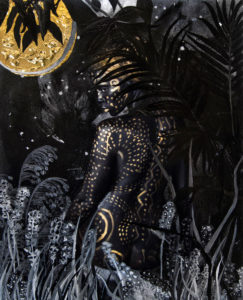 Lina Iris Viktor, NO. XVI COUNTER MEMORIES OF THE HEALER. From the series DARK CONTINENT XIII – XXIV THE FALL, 2017. Courtesy of the artist and Mariane Ibrahim Gallery.

The first works the visitor encounters are those from the Dark Continent series. These are characterised by the portrayal of a lone naked woman surrounded by foliage and flora of sorts. As it happens with most, if not all, of Viktor’s compositions, Lina herself appears as the portrayed character. We have seen in previous works, (displayed in the upper gallery at Rivington Place) how the artist already experimented with revealing and concealing sensible body parts using black paint. In the newer works, the British-Liberian chooses to extend the blackening of the body: in some images it is almost covered in its entirety, in some other, the artist favours a dialogue between the different shades of the black paint and the colour of her own skin. The intentional use of this limited colour palette directly links with the idea stated at the entrance of the building: the understanding of black as absolute beauty, as the materia prima. The artist challenges and negotiates the destructive connotations that historically and socio-politically black has had within societies: black has been equalled to dirtiness, soiled, hostile, evil, illegal and many more. Viktor elevates black to a valuable and precious condition, as a powerful asset from where everything is born. 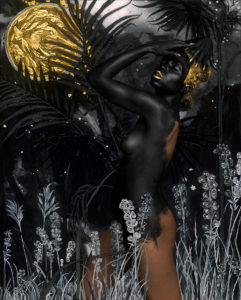 Lina Iris Viktor, We are the Night — The Keepers of Light From the series Dark Continent: Dark Testament, 2015-9. Commissioned by Autograph. Courtesy the artist and Autograph, London.

The title of the series Dark Continent references the idea that explorers at the end of the 19th century had of Africa: a mysterious place wherein savagery was to be expected. Informed by ethnographic photography at the time whereby black bodies were captured and portrayed as vulnerable objects for scrutiny and to satiate the curious gaze of the whites, the artist uses the blackening of the black body as a mode of shielding it off, as a way of ‘creating a layer of distance and disidentification between the figure’s body and the potentiality or potency of desire’. (1) In a sense, Viktor intends to desexualise the woman and de-eroticise the composition by using the black paint. However, in my opinion, this is not so clearly achieved and its interpretation many folds. There is no doubt that a beautiful naked woman is the focal point within the frame; thoughtful at times, sensual at times; I believe her poses are not innocent but rather carefully crafted. Some would argue that the artist uses strategies of self-objectification to attract and retain the visitors’ gazes. Contrarily, a mindful consideration would understand the work as an unapologetic gesture of claiming back the agency of not only the woman’s body, but the black woman’s body. According to the artist, she embodies a universal figure representing humanity whereby histories and narratives can be interwoven, and futures devised. 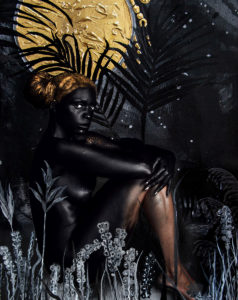 Lina Iris Viktor, After the long sleep we now wake . . . From the series Dark Continent: Dark Testament, 2015-9. Commissioned by Autograph. Courtesy the artist and Autograph, London.

As suggested earlier, in the majority of the works the figure appears immersed in her own world, her own thoughts, oblivious to what is happening outside the composition; yet there are two images in which she gazes at the viewer engaging in a moment of recognition with the audience, recognition of viewership. This is particularly visible in the series Materia Prima, which was the genesis of Constellations and Dark Continent. The woman that Viktor’s performs is presented as a powerful authoritative figure who reclaims space and respect.

The use of 24-karat gold across the works is definitely something that needs addressing since, on one hand, it occupies such a prominent space in Lina’s oeuvre, and on the other, there have been a few people commenting on how the feeling of overwhelm imbued by the (ab)use of it, made them leave the show rather soon and without an interest in inquisitively looking at the images, attitude which in a way, I found poor.

A fairly contemporary and extended understanding of gold as a highly commodified precious metal associates it with wealth, prosperity, grandeur, glamour, and even power. Nowadays, the idea of gold goes hand-in-hand with notions of capitalist accumulation and gain. The insatiable nature of human beings, ‘has driven the quest for gold, resulting in wars and empire building – from ancient African kingdoms to European colonial projects – large-scale migrations and displacements, and the devastation of the natural environment and those lives and livelihoods that depend on it’.(2) Needless to say that some of the most gold producing countries are located in the Global South including Ghana, South Africa and Peru.

In opposition to the trivial and devalued appreciation of the precious raw material, Lina Iris Viktor endeavours to re-create the usage of gold in ancient civilisations across Latin America and Eastern Africa. In an interview conducted by Renée Mussai, Head Curator at Autograph and curator of the exhibition, the artist notes how those peoples attributed gold to the sun on earth since it is capable of emanating its own light. They believed gold served as a conduit that guided dead people through their transition to the afterlife and the reunion with the gods, a guide to spiritual transcendence and therefore, was extensively included in mortuary coffins. It is that condition of self-illuminating that informs the artist’s intentions. She extrapolates this quality to the black colour on the woman’s body ‘the darker her body becomes, the more light she emits, like an illumination form within. Her body becomes a purveyor of light.’ 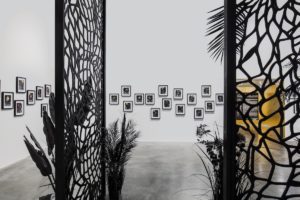 In the middle of the gallery space there is an enormous architectural piece entitled The Black Ark, a number of free-standing panels accompanied by blackened exotic plants named Black Botanica and that replicate the flora within the Dark Continent series. This functions as such an intelligent way of crossing-over the bi-dimensionality of the flat canvas and the tri-dimensionality of an immersive installation that invades and activates the space and puts the spectator at the centre of the darkened nature envisaged by the artist. Not only the installation allows for a playful viewing of the works over the walls by intermittently revealing and concealing as the visitor walks across it, but another layer of interpretation could suggest an apocalyptic visualisation of current environmental issues. 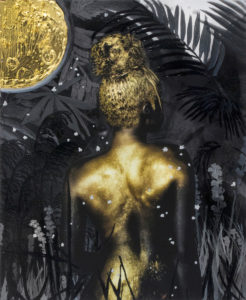 Lina Iris Viktor, NO. IX, RECALL, THE GOLD SIFTED FROM DIRT… From the series DARK CONTINENT I – XII GENESIS, 2016. Courtesy of the artist and Mariane Ibrahim Gallery

The exhibition curator borrows Maya Angelou’s notion of ‘Mothering Blackness’ to describe Viktor’s work purpose, understanding mothering as being caring, nurturing, protective, and kind towards blackness, its narratives, particularities, epistemologies and ontologies: ‘I believe there is some kind of reckoning that needs to happen, a re-gravitational pull in terms of the discussion around blackness… It has been for the most part, a very derogatory and negative conversation’.(3) Enthusiast of 24-karat gold or not, what is undeniable is that Lina Iris Viktor’s work provides with food for thought; she graciously interweaves complex aesthetics with conceptual and political commitment.

Lina Iris Viktor lives and works between New York and London. Viktor’s multifaceted practice is informed by a background in theatre and film. Working with a restricted colour palette, her artworks are a blend of photography, performance and abstract painting, along with the ancient practice of gilding with 24-karat gold to create increasingly dark canvases embedded with ‘layers of light’.

Raquel Villar-Pérez is a researcher, writer and curator. She is interested in post and decolonial discourses within contemporary art from the Global South, mainly from Africa and Latin America and their diasporas, and how they navigate and resist the trends set by Globalisation. Being especially sensitive to women’s experiences and notions of transnational feminisms, she investigates how these are presented in contemporary art. She has curated exhibitions and public programmes for the Brunei Gallery at SOAS-University of London, the Cambridge African Film Festival, l‘Alliance Française in Málaga, Tensta konsthall in Stockholm, and others. She has worked at Tate and currently works at Photoworks

← Seniority First? On Mastery And Techniques in Ugandan art.
Art as Therapy for African Refugees →