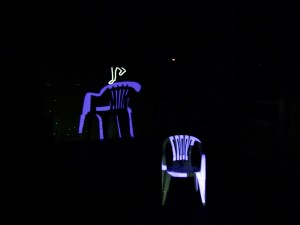 “Razia Barsatie plays an important role in the Surinamese art world, her work and approach to teaching marks that of a new generation. Paintings of the faya lobie, djompo voetoe and the spectacular inlands are an important part of the Surinamese cultural expression. Alongside are those artists such as Razia Barsatie who touch upon the understanding of their culture, their history and the entrenched prejudices that are still aspects of daily life.”
Lih-Lan Wong about the young Surinamese artist Razia Barsatie.

“I am interested in what happens within those squares we call home. There are so many stories, I want to make people see, recognize and eventually contemplate.”

Razia Barsatie is a young and strongly engaged female artist whom I met last autumn during my stay in Suriname. One thing that struck me most is her ability to uncover the country’s postcolonial structures. Through a variety of multimedia artworks she represents her society’s dynamics and the relationships between cultural groups marked by intercultural differences. Barsatie extracts her stories from a very intimate and personal domain: the everyday life of her domestic environment.
In 2012 Barsatie graduated from the Gerrit Rietveld Academy in Amsterdam with the video installation ‘Munsiki’ (2012). This work clearly has stylistic similarities with that of Kara Walker – whose work is an important inspiration for Barsatie. “Her work really gets to me, it is clear and simple in a way that everyone can understand. That gives weight to the content, to what she wants to articulate. She is more engaged with the history of it all but what we both have in common is our concern with our family’s condition. Kara Walker reveals the historical side of slavery; I am more concerned with the postcolonial present. In ‘Munsiki’ (2012) I tried to visualize my family, the relationships, growing up as a female and mostly the conversations about education, politics, status and class.” ‘Munsiki’ (2012) is the beginning of the development of a range of video installations that portray critical and socially engaged issues. 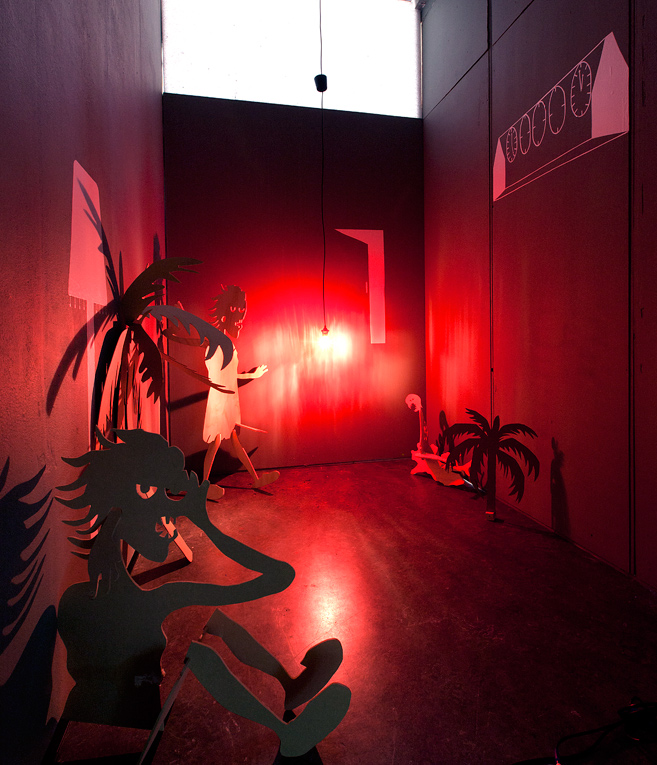 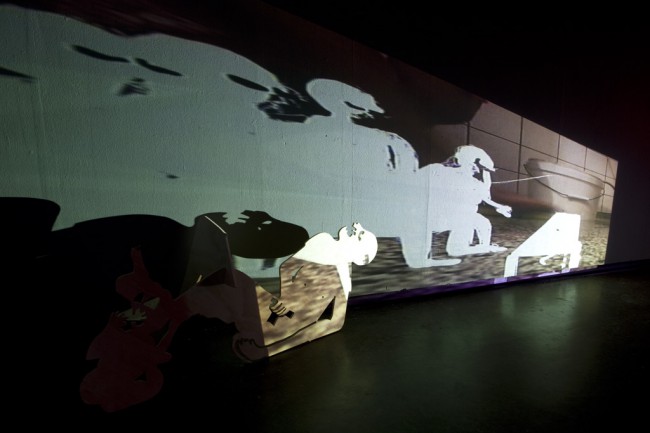 Suriname is one of the most colourful countries, both in nature and culture. The rich and contrasting colours of the fauna and flora are often reflected and abstracted in the work of many local artists. When asking what is the most striking feature of working in Suriname as an artist, the response is almost always the same: its diversity. The artists I spoke to not only refer to the versatile nature of their country but also to the mixture of cultures – referring in particular to the indigenous people, the Creoles including the Maroons (the descendants of escaped slaves), the Hindus, the Javanese, the Chinese and the Jewish community. This rich mixture of cultures is generally represented as the perfect model of a peaceful multicultural society opposed to the current global issues. The synagogue alongside the mosque in the Keizerstraat of Paramaribo symbolizes the equality between the different cultural groups for many. Yet, Razia Barsatie reacts differently: “We are here with five races, five different cultures but we cannot speak of equality. As a woman of Hindustani descent I experience this daily in my domestic environment. The Creoles are always considered negatively within my surroundings. There are many examples to illustrate this. For instance my mother and her gardener who came back from Haiti with his wife, they both stayed with my mother to work. The man as a gardener and the woman helped out as a cleaning lady. When I came back to visit from Europe, my mother asked me to get us something to drink. She whispered in my ear that I should get a plastic cup for the gardener and his wife. I was so surprised! Eventually I served all of us drinks in plastic cups. However, I keep trying to explain her that it is wrong. In my opinion this mode of thinking can be traced back to the days of slavery. Unlike the Creoles, who were shipped to Surinam as slaves, the Hindustanis and Javanese came to Suriname as contract labourers. Unfortunately, this could well be a cause for this particular behaviour. Therefore I cannot blame my mother for serving her gardener a plastic cup while all the others are served with regular ones, as it has always been her train of thought. However it remains an everyday struggle and that is what my work is about.”
Barsatie’s personal experience illustrates the aftermath of the former inequality of labour and additional status. These historically rooted structures are entrenched in common intercultural behaviour. Her work ‘Untitled’ (video animation, 2013) presented at her solo exhibition ‘Anxious’ (2013) demonstrates this behaviour in a series of loose shreds, scenes that occurred in her household. As an anthropologist of her own family, Barsatie reveals what is still tangible in the contemporary life of Suriname by observing, collecting and composing. “The video animation is about gossiping, but more the act of it. I have emphasized negative social behaviour such as whispering and excluding others. I tried to visualize the atmosphere of two people talking about something only they know. In only a couple of seconds not the story but the interpretation of that story will be passed on to someone else. The images reflect my observations of social inclusion and exclusion.” 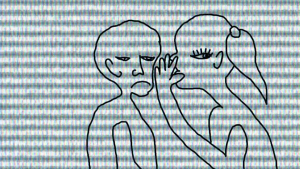 The gossiping and the acts of social exclusion can be understood as universal behaviour. Still, Barsatie departs from her own experience. “It is about my home, where I come from. The Mehndi patterns refer to a form of art that can be traced back to ancient India. This work also shows the important role of voodoo in the life of my family. The death of my brother made my mother believe it was caused by voodoo. She was convinced that it was this evil that had hurt him. Voodoo became an explanation. The gossiping and whispering is part of believing in something that does not exist.”
The most literal translation of Barsatie’s struggle is the installation ‘Trapped’ (2013) purchased by the State and currently placed on the Latour roundabout of the Indira Ghandi Road. All the windows and doors of almost every house in Paramaribo – with the exception of the traditional wooden prasi oso, Sranangtongo for “house on the yard” – are protected with bars, or what is called thieve irons, to prevent burglars from breaking in. ‘Trapped’ (2013) consists of painted iron doorframes set with bars but intentionally left open. The iron bars are milled into decorative shapes that represent general domestic objects. “The work I made of different fences is all about Suriname. After returning from Europe I drove around the city and asked myself: why does a house need iron bars? I know we all want to protect our family but it disfigures the entire environment and domestic territory. Moreover it brings us fear. In the end we imprison ourselves and the ones we love.” 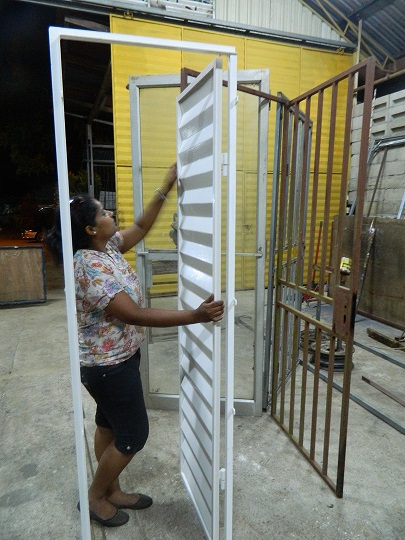 Razia Barsatie installing ‘Trapped’ (2013), installation on the roundabout of the Indira Ghandi Road 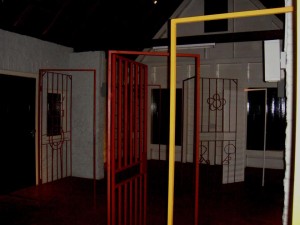 In addition to the immediate references, ‘Trapped’ (2013) has a clear connection with the previous ‘Untitled’ (2013) video animation; it symbolizes the liberation of bias and distrust. “When I talk about my work it is actually about our way of thinking and how we subsequently act upon it. In the Hindu community where I come from, I feel the existing prejudices towards the fact that I have a Creole partner or that I – as a woman – stay in Moengo by myself. Moengo is still viewed as a town with a bad reputation since the internal guerrilla war. We should stop trapping ourselves, literally. My work is meant to open up and think freely. With my work I aim for acceptance.”
Barsatie’s involvement in the redevelopment of Moengo cannot be overlooked. As the artist in residence at Tembe Art Studio (TAS) she is currently working on a site-specific artwork in the Marowijne district. By constructing a life-size telescope that actually works. The telescope will be focused on Moengo; Barsatie’s aim is to build a bridge between Moengo and the rest of Suriname – in particular Paramaribo. “This project is dedicated to the community of Moengo. In the last three years I have been travelling from and to Moengo weekly and became very involved with the community, especially with the kids. The negative view of Moengo – a bias that mostly comes the capital – frustrates me.” 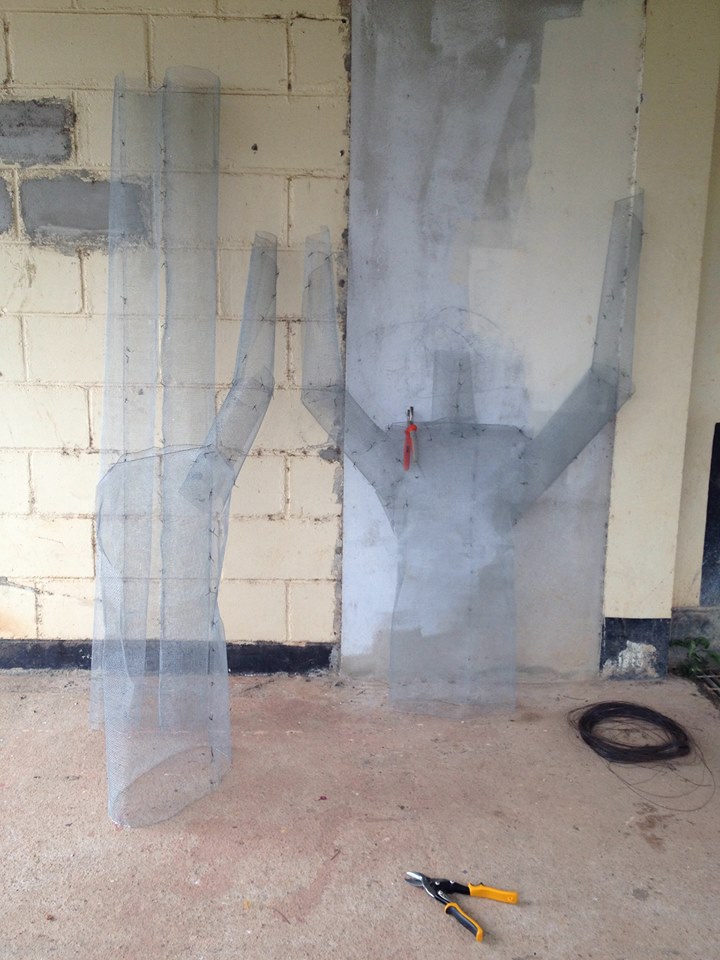 Aside from her activities in Moengo, Barsatie is passing on her knowledge as Art Communication teacher at the Nola Hatterman Art Academy (NHAA) in Paramaribo. The conceptual approach of the Rietveld strongly influences the content of her classes: “It is not only about the techniques of drawing and painting it is also about understanding theory and moreover there is more to art than painting. I want to make them understand that our country is rich of all sorts of materials that can be used for an artwork. I want to make them acquainted with all different media and learn them to produce an artwork step by step: it starts with an idea, followed by research, than we choose the materials that suit the idea best to finally materialize.”
Barsatie plays an important role in the Surinamese art world, her work and approach to teaching marks that of a new generation. Paintings of the faya lobie, djompo voetoe and the spectacular inlands are an important part of the Surinamese cultural expression. Alongside are those artists such as Razia Barsatie who touch upon the understanding of their culture, their history and the entrenched prejudices that are still aspects of daily life.

Lih-Lan Wong : MA Art history/production &communication. She worked for W139, a development-orientated artist-run space in Amsterdam. At the moment she is working for the Moengo Art Festival in Suriname.