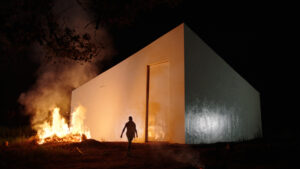 From March 24 – April 24 the film will be screened each day onto the exterior walls of the White Cube museum – designed by OMA – in Lusanga (D. R. Congo) as well as onto the walls of Congo’s National Museum in Kinshasa. These main screenings will be supported by satellite screenings in Lagos and in Tamale, in addition to London, Brussels, Melbourne, Moscow, Berlin, Sharjah, Tokyo, Indonesia and The Netherlands.. During the launch, the first major solo show by internationally renowned Ghanian artist Ibrahim Mahama at the White Cube in Lusanga will also be announced.

It is about one of the most relevant, and question-raising projects that we could see at this moment, touching upon moralities of sponsorship, of de-colonisation, BLM, global iniquities, broken art market models, restitution, and so much more. The film touches on the history of colonialism (and its after-effects) in Congo, on the moralities of sponsorship and patronship in the leading Western cultural institutions (and the white-washing of the ugly face of the business with cultural commissions), and more. What’s more, the film is really positive! Something we all need right now.

Renzo has spent the last ten or so years working in Congo, the documentary tells the story of his project there. It is essentially an African story – plantation workers in a small village in Ghana taking on the enormous Western capitalist-led art system and making it work for themselves in order to free themselves of the colonial legacy and gain full autonomy. The crazy thing is that it works and they have had enormous success with it, both financially and artistically.

The people of Lusanga (previously Unilever owned and managed) formed a cooperative, where they make sculptures from river mud. These are scanned in Lusanga and the scan is then sent to – and reproduced in chocolate – in Amsterdam. The sculptures have been exhibited and sold in the top institutions, galleries, museums and art fairs globally. With the proceeds, the workers have not only been able to buy back their land from the corporations whom have owned it since the 1920s, they have also had the means to work with architecture firm OMA and have them design and build a functioning art gallery in their plantation. ARCH Daily (the world’s most visited architecture website, [sic.]) has just nominated this building for their 2021 “Building of the Year” Awards.

Renzo’s thinking for this project emerged after a visit to the Tate Modern museum in London, where he was struck by the Unilever commissions, and had to think of the people working on the (Unilever and other) plantations around the world who are still earning really minimal amounts whilst working in terrible conditions. He wanted to reverse this system of the profit going to the multinationals and to find a new way where the people are enabled to use art as a means of empowerment, enabling them to buy back their land and in doing so also end the destructive mono-culture growing brought in by the corporations.

Renzo has helped with the contacts and the ideas, he also had Rene Ngongo, Founder of Greenpeace Congo on his side, and the people of Lusanga had the guts to believe in this project and really make something from it.

During the four-week global museum launch, White Cube is projected daily onto the white walls of the White Cube in Lusanga, the building which features in the film. Thirteen key art institutions worldwide join the event, hosting a series of screenings and debates about the projects’ implications. 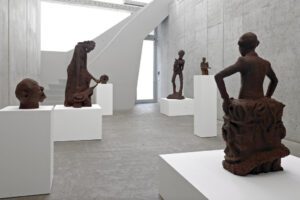