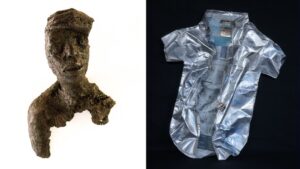 The two artists seem to be working differently and hitting at two opposite ends of an aesthetic but they are together mainly because they work with recycled material. They give a chance and a new life to what would have destroyed our environment if it was just thrown around and not put into good use like they have. Perhaps there work becomes more important now that it hinges unto our living and welfare as humans today.

Matt Kayem about the duo-show of Richard Atugonza and Ronald Odur.

“Flaws are good”, Richard Atugonza and Ronald Odur seem to be telling us at their duo-show, (im)perfections) at Afriart gallery. Or they seem to ask a difficult question, what constitutes perfect? This in the end leaves them going against the accepted norm and celebrating imperfection in their new work. Maybe this is a safer concept for the two emerging artists to tackle as it is expected that they need time to hit at ‘perfection’ in their careers. “Whatever that means”, they will probably retort if you engaged them in a conversation about the aesthetic. 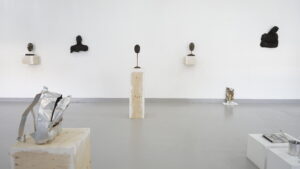 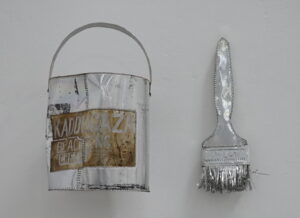 I find myself liking the stylized title of the show with the two first letters in brackets which probably hints at two words, Imperfection and perfection in one word. Curated by Lara Buchmann, the show brings together two artists who are pioneers in the new residency program which is part of the gallery. Although the two artists fall into the emerging category, Odur’s practice is older than Atugonza’s who’s just fresh from art school as he wore his cap last year. With a long duration attached to the residency which ran from March to August, the artists have not disappointed in the quantity spheres as they have put out a large bodies of work. Atugonza has 20 works and Odur serves us 10 of his magic. 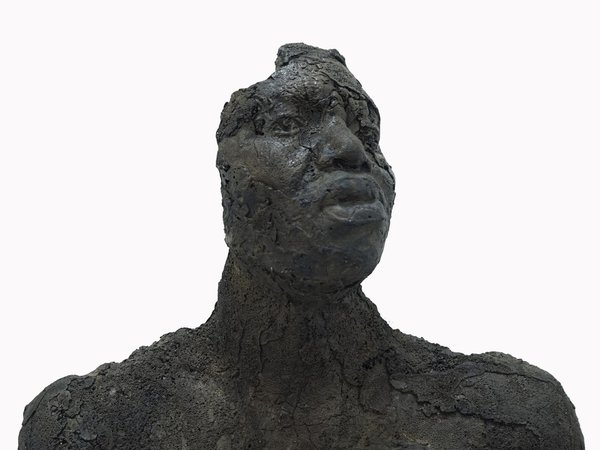 As you enter the gallery, you are ushered in by what one first timer called neatness. The gallery space was earlier refurbished to take on this internationally hated white-cube heaven-like and imposing interior. Since it’s a new development in a city in love with potholes and dust, I’ve always betted that it was the right approach to introduce and lure Kampalans into looking at pictures. The middle-class devils love experiences and places that hint at the words, ‘fancy’ or ‘high-class’ and to create an ambience that mimics that is to attract this fellows. The curator, Buchmann, does a good job at throwing the artists’ three dimensional objects around the place, randomly, with Atugonza’s work mostly taking up the walls and Odur’s enjoying the breeze of the middle ground. This wouldn’t however be avoided as most of Atugonza’s work is tailored to be hanged and the vice versa for Odur’s. I liked the pedestals on the wall used for Atugonza’s face sculptures. They complement them well for we don’t need to see the back, we are only interested in the front. And oh, this is a slap at the traditional characteristics of three-dimensional sculpture work which is meant to be appreciated all round from every angle.
Oh sorry, I haven’t said anything about what the artworks look like. Atugonza makes what I will call half-sculptures using a mixture of sand and melted plastic. His is majorly casted work. I find his practice labor intensive as he has to apply plaster bandage to a model to make the caste in which he pours the melted plastic and sand thereafter. His process would be thought of as experimental but looking at the finished products on the walls of the gallery, the artist seems to have mastered his technique. 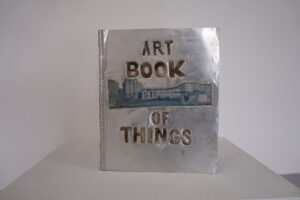 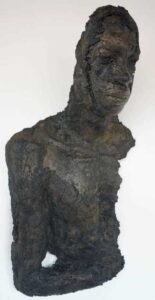 Richard’s work takes on a rough unfinished aesthetic that reminds me of Augusta Rodin’s work and local artist Emmanuel Lwanga’s. The difference from his predecessors’ is that his has an element of two-dimensionality, in simple language, it’s half of a sculpture. If it’s a bust, we are only served with the profile of the face to the ears, the neck and front of the chest by Mr. Atugonza and we are left to finish the whole figure in our minds. What better way can a work of art be as interactive to the viewer as this? His work is largely expressive not only with the technique but also with the postures and poses.
Atugonza’s work connects more to the imperfection side of the title. He doesn’t finish the sculptures with a smooth surface and clear features but leaves us with suggestions of the features and the most important parts of the human body that will transmit his desired message. It is not perfect but it is good. His practice fronts and appreciates the beauty of the flaws, the accidents and the cracks in his sculpture. After all, individuality comes forth within such work in that, no work will ever look similar to another. To look deeper into Atugonza’s work is to look deeper into the philosophies of probability and chance. This is where Lara comes in as she relates the artist’s work to the Japanese art of Kintsugi which celebrates imperfection by repairing cracked pottery with gold lacquer. 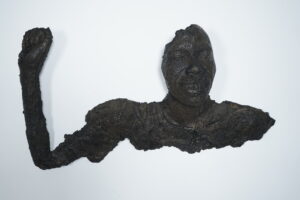 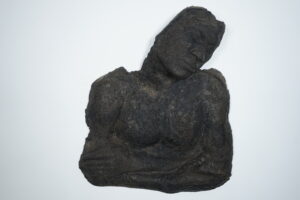 Wabi-sabi is a world view form traditional Japanese aesthetics that the curator talks about in the same breath as her artist’s works. Atugonza’s work aligns well with some of the characteristics and principles of the aesthetic which include asymmetry, roughness, simplicity, economy, austerity, modesty and intimacy. Atugonza’s imperfections are a direct blow to the Greek ideals of beauty and perfection which he was taught at the university. But perhaps, the young lad didn’t think this far when he was toying around with sand and plastic in his studio. Maybe he was just expressing himself from within without having to open encyclopedias. Nevertheless, the final product on the walls is quite impressive indicating that the newcomer was attentive during his anatomy classes.
It’s Atugonza’s first major gallery show but the work seems to belong to an artist who has been in the industry for some three years. Among the half-hazardness and rough texture of the sculptures, there is a fair degree of detail in that you will see the eyelids on the eyes of a bust, you won’t mistake the teeth of a smiling face for anything else other than teeth. The gist in Atugonza’s work is his portrayal of emotions, for example in Imperfection Pefections 3, which has a half front figure of a young man folding his hands to the chest and bowing his head to his left. The figure seems in despair, maybe of this young man who doesn’t have much control over what’s happening around them. He probably has failed to get a job which is an issue in the country currently or he has lost his daily income owing to the corona virus lockdowns in the country. So he just sits back, wraps his hands around him, probably half-naked and takes in the cold, maybe on the streets of Kampala. 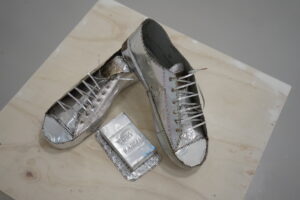 Odur on the other hand works with aluminum printing plates which he manipulates through embossing, burning, stitching and creasing as well as adding wire, paper and found objects. Odur has a personal connection with the metal which he used to collect and sell as scrap to dealers. The metal could have been readily available owing to the fact that he lives just meters away from the notorious Nasser road which is the hub of everything stationery in the city. I first saw his work about two years ago and he’s always been working in two-dimension, often using the embossing technique. But during his residency, he developed a technique using copper wire to stitch aluminum plates into replicas of common objects. He says that the objects he duplicated are those close to him. And indeed, when looking around the gallery, you can’t fail to catch sight of a laptop out of aluminum, an aluminum pair of Chuck Taylor shoes which he playfully titled No Hurry, an aluminum back pack and so forth. There is an aluminum shirt too he titled Muvumba which is Luganda for second-hand clothes. Again, that must be inspired by his surroundings which in this case has the famous Owino market where second-hand clothes form a big percentage of the merchandise. The market is also in a walking distance from his home. 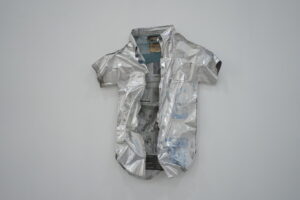 When you look at Odur’s objects, you are forced to wonder how he pieced the metal parts together to form the cute-looking replicas of usual items. After looking at the stitches on the works and the intricacy required, it finally dawns on you that you are standing in front of products from a good craftsman. Odur’s dexterity at working the soft metal is very evident everywhere on the works, from the intricate stitches to the well-cut shapes, the bends and creases to mimic the natural likeness of the object he has chosen to study. Odur’s work fills in for the perfections side of the exhibition title. It is easier to the eye with its finished look and also the subject matter which are objects in our daily use in our homes and studios as artists. A gallery goer will immediately recognize the replica objects for their close resemblance to the originals. Odur is probably trying to tell you his story with the objects. He’s calls upon us saying, “look, this is what surrounds me on a daily, these are my treasured stuff”. One of the objects that caught a gallery goer’s interest at the opening was The Art Book of Things where the artist made this aluminum book, in it, names of some artists and people he probably looks up to. Was glad to see my name appear in the book. He told us that the book is like a reply to those around him who are always asking about what he’s making to which they usually reply to themselves saying he’s just making his things. 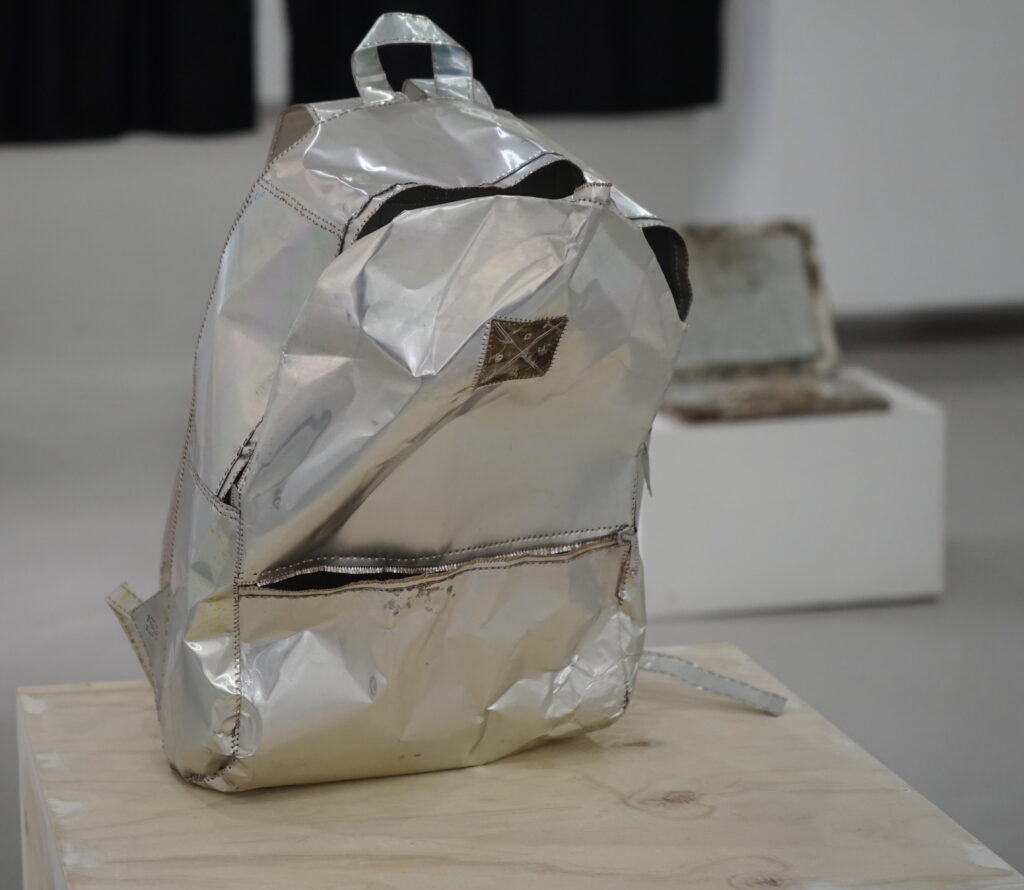 It wouldn’t be right to be quick to criticize Odur for having an interest in the everyday objects around him and thus, not giving us a core concept or story behind his work. Besides, Warhol introduced the obsession and Jeff Koons still does it. But it’s probably a matter of time and later in the young artist’s career, his work might change to be more inclusive and less about the self.
There is still room and most importantly time for the young artists to explore their themes and techniques much deeper. Maybe Atugonza will break his work next time and presents it to us in different pieces if he’s to explore the Japanese concept of imperfection a little more. Maybe Odur will look beyond his studio and duplicate objects that have become synonymous with our general living today as Kampalans – objects that will tickle the minds and hearts of others, other than just himself, like the surgical mask, the tear gas canister or the gun.

*
The two artists seem to be working differently and hitting at two opposite ends of an aesthetic but they are together mainly because they work with recycled material. They give a chance and a new life to what would have destroyed our environment if it was just thrown around and not put into good use like they have. Perhaps there work becomes more important now that it hinges unto our living and welfare as humans today.

Matt Kayem is a contemporary artist, art writer and critic based in Kampala, Uganda. He can be reached on mattkayem@gmail.com.