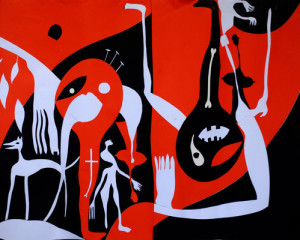 Guadeloupean Ronald Cyrille continued the conversation of home and the agitation of the Caribbean space, less in the scope of immediate physical danger, and more in the aspect of aesthetic representation of an inner connection to the environment. Working across painting, sculpture, and street art, Cyrille repositions elements he encounters in everyday Guadeloupe into surreal engagement within imagined or real landscapes. Cyrille spent several years of his youth growing up in Dominica, and began his presentation by delving into the concept of belonging. 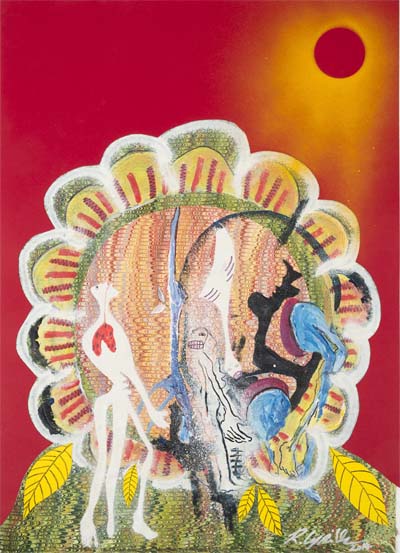 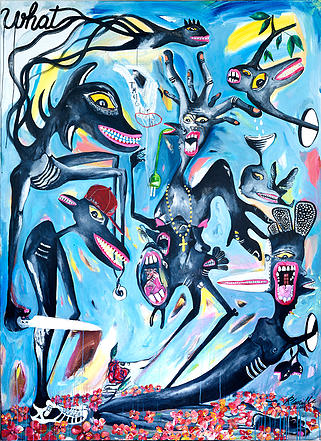 He explained that when he was in Dominica, he longed for the idea of Guadeloupe, the country he was born in and where his mother still lived. When he moved back to Guadeloupe, he experienced profound nostalgia for Dominica. This interrogation into place and ‘home’, undoubtedly feeds into a heightened awareness of daily life and the reinterpretation of it into mystical and grotesque depictions. One recurring character in Cyrille’s work is that of a dog like creature with a long snout, derived from the stray dogs seen on the streets of Guadeloupe. These dogs are re-presented by Cyrille in a surrealistic manner, creating sub-species including those of two headed creatures and cycloptic double snouted creatures. For instance, in a detail of the intricate painting piece Viser la lune (2015), a white two-headed, six-legged character is barricaded in a yard, watching a yellowed moon, whilst red fruit-like objects rain throughout the entire piece. The six ‘legs’ of the creature have human hands at the end in place of feet, and collect the falling objects. When discussing the use of colours in his work, Cyrille stated that it’s purely an aesthetic process, mainly in exploration of contrasts. He explained that this was still the case in his street art work, that the black men-like characters interacting with the public space are black only to create a stark contrast with the building there are encountering.(text website Caribbean Link) 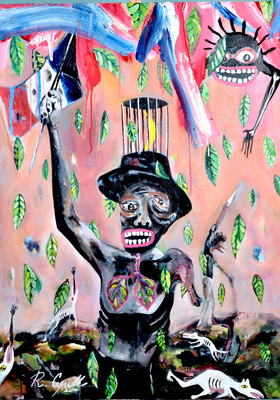