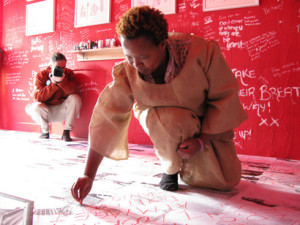 Performance is important to me. I like to insert myself into situations. I like to bring my work to people. I notice that where I work currently, there is a visible struggle with how I look. Women are so accustomed to being sexually available but my dress (as Theodorah) speaks to Black South Africans who understand that I am not available. I am interested in how far I can push limits and eventually provoke people to interact with me.
Yvette Greslé interviews the South African artist Senzeni Marasela.

Senzeni Marasela: I remind them of their own waiting.

Yvette Greslé: Your work explores histories of women, Black women: women whose stories have been made public and visible and those whose stories are played out privately and obscurely. Your work speaks to political questions: race and gender. It also speaks to women’s trauma and what it is to live in a continued (traumatic) relationship to apartheid South Africa; and histories that preceded it. You have produced a series that explores the figure Sarah or Saartjie Baartman – the so-called Hottentot Venus. Born in c. 1789 in the Eastern Cape, she was taken to London and displayed in a building in Piccadilly. The art historian Annie Coombes has written about the autobiographical elements of your work. 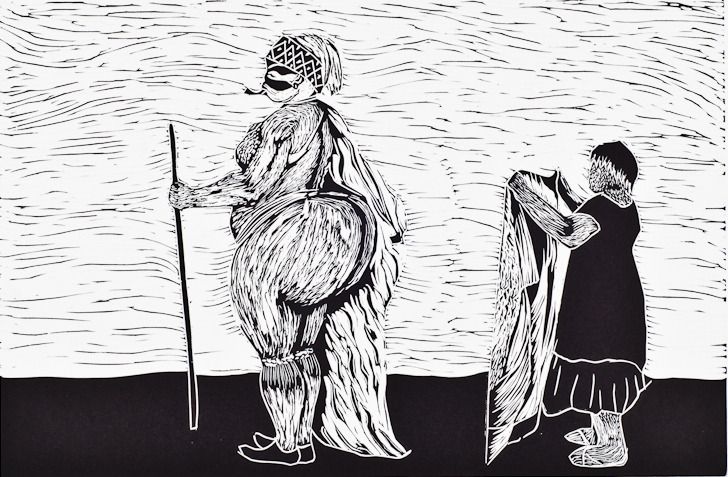 Senzeni Marasela: I feel the need personally to participate in writing Black women’s history. This includes exploring issues about our bodies, and how it is we survive trapped in-between two patriarchal worlds (one black, and the other white). Sarah Baartman’s story is traumatic, it is so very tragic. She has also become a symbol of Black female suffering. My work is also about a dialogue with my own mother, who in my eyes suffered immeasurably, myself a victim of her past, and Sarah, who suffered publicly and in a very humiliating way.

YG: What are the mediums you use to tell these stories about women?

SM: My methods are labour intensive: sewing and printmaking (linocut) mostly. Sewing is a way of inserting myself into my work. And tying myself to my mother. She sewed endlessly when I was a child. 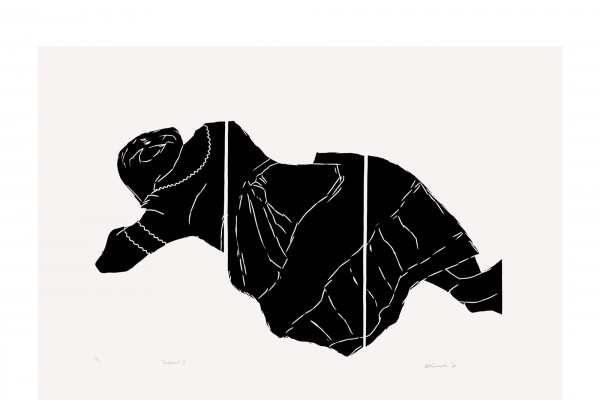 Theodorah II, 2005. From series of three linoleum cuts. Courtesy the artist and MoMA.

YG: In 2009 you produced performance and installation work exploring ideas about women and beauty at Deveron Arts, Huntly, Scotland.

SM: The dolls performance in Scotland looked at how ideas about the female body are formulated by dolls and popular culture such as magazines. I placed photographs of dolls all over the room and as people walked in I wrote on the floor, personal accounts of ugliness. I was working with a book called ‘The Bluest Eye’ by Toni Morrison. The books protagonist Pecola Breedlove is so devastated by the cruelty that surrounds her and she asks: ‘How do you do that? Make someone love you?’ She saw how people caressed and loved dolls; white dolls with blue eyes. She wanted some of that love. 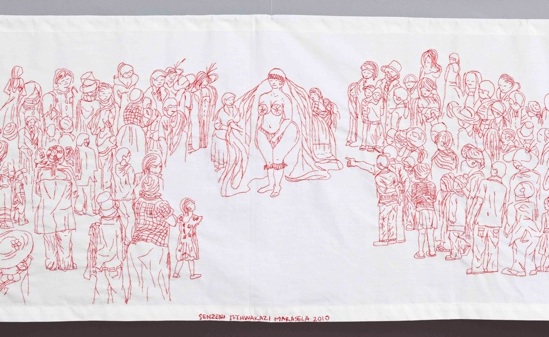 Theodorah, Senzeni, and Sarah I (detail), embroidery. Courtesy the arist and Axis Gallery.

YG: You have also invented an alter ego which you name Theodorah Hlongwane, who you named after your mother.

SM: I keep on re-inventing Theodorah, my alter ego. I am exploring Njabulo Ndebele’s novel ‘The Cry of Winnie Mandela’ (2003). Theodorah is now searching for her husband. I am looking at women who have waited for their husbands to return. Reading Ndebele’s book I was touched by individual levels of paranoia: the guilt the women characters feel over being left; and the rejection that follows. I am interested in the conversation (albeit imaginary) that they have with Winnie Mandela. She waited publicly. She waited in front of cameras, and the lenses of journalists. But I think that there is no waiting that is private, it is all public.
In my role as Theodorah I wear a particular kind of dress. When women get married, in my culture, they dress in a way that marks their married status; and it ties them to a particular man. The dress I am wearing is associated with people from Lesotho, and clothing called Seshoeshoe. The name of my man is Gebane. He has left Theodorah behind, in their village. She is now in Johannesburg searching for him. She wants to be liberated from him. He is the only one who can release her from the dress of the married woman (which ties her to him). Gebane has to perform a ceremony before Theodorah can be released from him. I have made a conscious decision to remain in the same dress for a period of close to 5 years. I am in the first year now. I use Twitter @ArtistSenzeni to document the journey towards finding Gebane and hopefully Theodorah in the process. 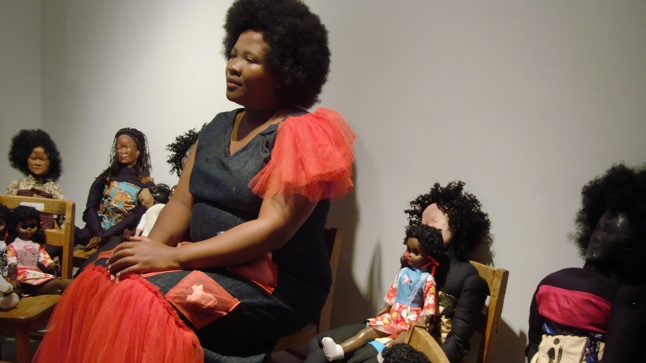 YG Gebane is a fictitious character?

SM: Yes. There is a reason why I decided to hold vigil for a man who does not exist in my performance. Gebane is a phantom of my imagination but he exists in the minds of the people that understand what I am wearing. I have decided to use Twitter to try and give him a face so that people can relate to a potential living being.

YG: How do you think about Performance, as a part of your practice? In an interview with Edward Tsumele you say, about your current, everyday performance as Theodorah: ‘Because I am in character (wearing the same looking dress everyday) I am a state of perpetual performance’.

SM: Performance is important to me. I like to insert myself into situations. I like to bring my work to people. I notice that where I work currently, there is a visible struggle with how I look. Women are so accustomed to being sexually available but my dress (as Theodorah) speaks to Black South Africans who understand that I am not available. I am interested in how far I can push limits and eventually provoke people to interact with me. People I work with are frustrated by my dress, and with what I look like. They do not understand why I am driven to do this. They do not ask me. Some are angry, and I remind them of their own waiting.
The act of looking the same every day is labour intensive. Every day I have to undergo mental preparation for shielding myself against critics. But I have great determination to continue with Theodorah’s quest. Every time I get a negative response the more I become determined to tell her stories: the stories of Theodorah and others. I have to tell this story again and again: the borders between real and unreal are fluid. 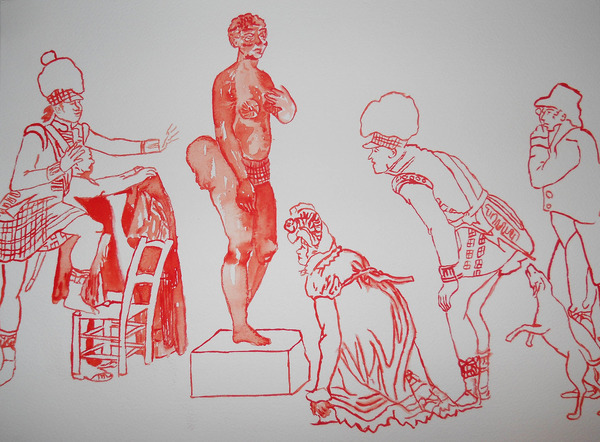 Yvette Greslé is a London based research associate. The Research Centre, Visual Identities in Art and design, Faculty of Art, Design and Architecture, University of Johannesburg. She is a freelance writer and art critic.