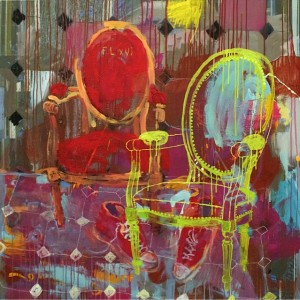 That Gopal Dagnogo is carrying his personal history with him, I have no doubt. On the other hand, because of the way he does it – generalization, abstraction – he raises the issues to a universal level, allowing a broader interpretation for his work.
Rob Perrée analyzes the work of Gopal Dagnogo, born in Ivory Coast, living and working in Paris.

In 2013 Ivory Coast participated in the Venice Biennale as a nation. For the first time. This also made it the first West African participant. Until then only South Africa and Zimbabwe had been present at the prestigious Italian biennale. Angola and Kenya were the other African newcomers.
Why is this newsworthy?
Because Africa is still under-represented at important international exhibitions? Because the majority of African nations are not yet ready for prestigious platforms such as Venice? This interpretation strikes me as too negative. I prefer to see it as confirmation that Africa is on its way, that it is on course to taking a position that, considering the developments in visual arts there, it is entitled to.
The fact that the West knows few artists from Ivory Coast – except perhaps the ever-present Frédéric Bruly Bouabré – says more about the West than about the quality of this country’s art.
Gopal Dagnogo (1973, Abidjan) is exemplary for this. He may not yet be a big name, but he is producing work that is applying for Venice 2015.

Dagnogo was born in Ivory Coast. His mother is French, his father Ivorian. At 17 he leaves the country to study in Paris. In 1997 he returns to Africa, this time to Burkina Faso. Here he learns all about the skills of the traditional bronze artists. After three years he decides to return to Paris. This is due in large part to the political situation in his own country. Until the nineteen-eighties Ivory Coast had been a prosperous, independent country. The elite from the south, however, held the power. Almost no opposition. Newcomers – from Mali and Burkina Faso – are denied any sort of influence. A multi-party system is not introduced until 1990. From 1995 tensions increase. In 1999 the military seize power. The years that follow remain turbulent. Presidents taking power for themselves, rebels demanding power. Daily life is colored by violence. After the president – Gbagbo – was deposed and conveyed to the International Criminal Court in The Hague in 2011, things seem to have settled down. That artists such as Dagnogo should feel disillusioned and leave their countries in turbulent times like these, is understandable. Likewise that their countries continue to feature in their work.

Dagnogo mostly makes large, colorful paintings. In free, almost slapdash brushstrokes. Figuration and abstraction fight for precedence. The canvases are painted in layers. Sometimes the figurative elements are for the most part painted on lower layers, and then sometimes these are on top. The various layers have a high degree of transparency. The bottom layers always remain (partially) visible. This not only enables him to bring space into his work, but also mystery. It arouses my curiosity.
This way of working reminds me of the Dutch/American artist Willem de Kooning. He uses similar colors, bright but soft. Contrasting with the forceful gesture. His expressionist style of painting has the same fluent, carefree character. The figuration never entirely disappeared from De Kooning’s work, either. ‘Two Figures in a Landscape’ (1967) for instance – from the Stedelijk Museum collection in Amsterdam – justifies the comparison in my opinion (see reproduction below).

And yet there is also a significant difference between the two artists. De Kooning lacks the engagement that is what gives Dagnogo’s work an extra dimension. Partially hidden behind or above the carefree brushstrokes objects or animals can be seen, the presence of which cannot immediately be explained. Trainers, sneakers, slippers, Louis Seize furniture, pheasants, chickens, (liquor) bottles, glasses, beer cans, Heinz cans, Tabasco bottles. Just in outline or fully colored in. Sometimes cryptic texts are dimly filtering through. They look like calculations. Could be of anything. It seems as if he is consciously introducing everyday elements, in the same way that the Pop Art artist tried to lessen the distance between high and low. For Andy Warhol and his associates the introduction of ‘mundane’ objects was the statement itself. For Dagnogo they stand for something, they are symbolic for a particular society (as the image elements in the work of Jean-Michel Basquiat stand for something, are more than their representation). A society he knows from his youth and which can still – even if times have changed and the circumstances are different – reveal its bad side. They must refer to his homeland, Ivory Coast. The history of his country since independence (and for that matter, before) is a history characterized, branded even, by the chasm between the haves and the have-nots. The initial prosperity was reserved for a small group in the south. Abidjan was then ‘The Paris of the Ivory Coast’. The Louis Seize furniture and the pheasants refer to this. In particular, the violence that has ravaged the country since the nineteen-eighties can be reduced to a consequence of the same problem. A more or less permanent battle between the people who hold the power and the people who have nothing. A consumer society from which one section of society profits, but where another has to appropriate it in order to gain any advantage. A society that places possessions above values, violence above civilization, intolerance above respect, and so forth. This context gives a different, more personal connotation to the everyday objects in Gopal Dagnogo’s work. 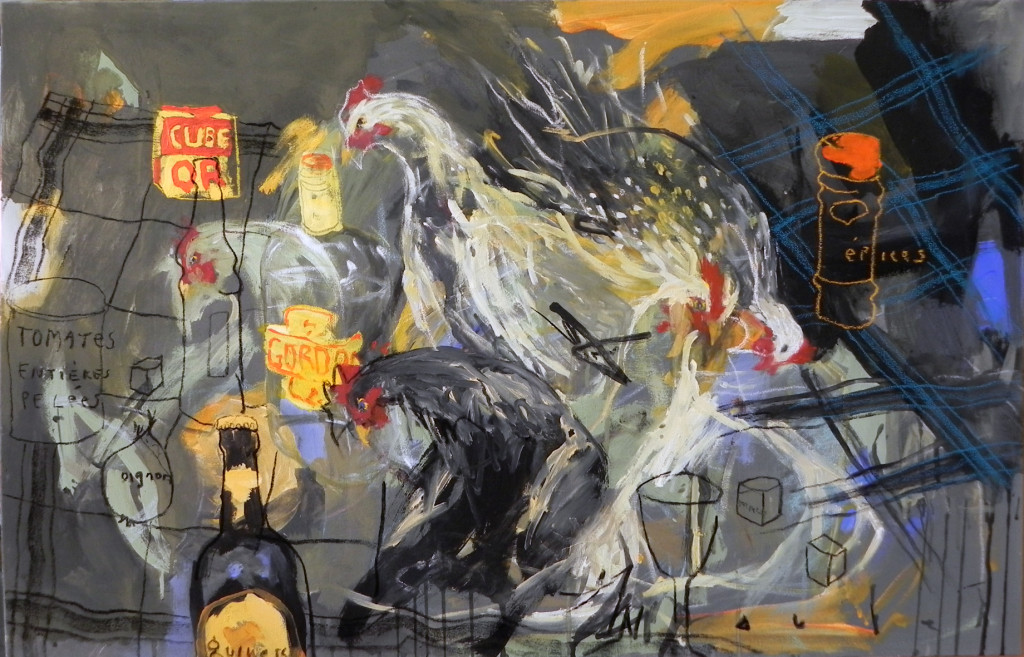 When you talk to the artist the impression you get is not that of a gloomy man. He repeatedly says that he only paints when it’s fun, when he enjoys it. His rather free style seems to support this. It exudes energy. It is ‘happily’ painted. But it is precisely this vivacious exterior that draws me in, in order to bring about a confrontation, to rub my nose in the facts, as it were. He has also made a number of still lifes and in these it is the innocence of the genre that reinforces the confrontation with the content. The stilled objects are more than they directly reveal.

That Gopal Dagnogo is carrying his personal history with him, I have no doubt. On the other hand, because of the way he does it – generalization, abstraction – he raises the issues to a universal level, allowing a broader interpretation for his work.

Surprisingly enough one of his other activities fits in with this. He is illustrating a series of booklets to be published under the auspices of the Organisation International de la Francophonie. These books briefly tell the story of remarkable people from various cultures: the non-conformist poet from Cayenne, Léon-Gontran Damas, the South African singer Miriam Makeba (‘Mama Africa’), the American leader of the Hunkpapa Sioux indians Sitting Bull and the feminist Belgian explorer Alexandra David-Néel. A marvelous example of universality and of making something extraordinary universally accessible.

In 2015 Nigerian-born Okwui Enwezor is the curator of the Venice Bienniale. If Dagnogo is not presented in his country’s pavilion, then Enwezor should at the very least include him in the general presentation.

Rob Perrée is art historian, freelance writer and curator, founder and editor of Africanah.org. Published numerous article and books on contemporary art. Lives and works in Amsterdam and Brooklyn. 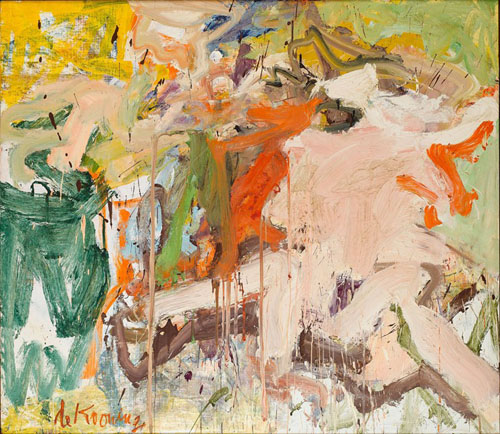