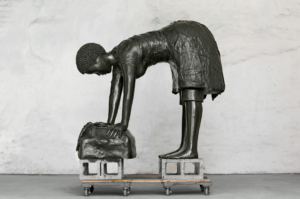 By working with the energy of this truth in her work rather than historical fact, Leigh reclaims the narrative and space independent from the timeline of colonialisation. In this way she achieves the eponymous state of “sovereignty”.

American artist Simone Leigh is representing the United States at the 59th International Art Exhibition of La Biennale di Venezia in 2022. Her exhibition Sovereignty is commissioned by the Institute of Contemporary Art/Boston in cooperation with the U.S. Department of State’s Bureau of Educational and Cultural Affairs.

Leigh has spent the last two decades creating a body of work that includes sculpture, video, performance and explores Black femme interiority. The Chicago native has been showcased across America and the globe and now features in Venice. 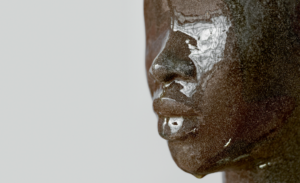 Sovereignty is a new set of work focusing on self-determination, the “Black femme subjectivity” and the performance and construction of the subject matter. On the theme of feminism, the artist not only celebrates “the capacity of Black women to overcome oppressive circumstances, but rather indict the conditions that so often require them to affirm their own humanity.” As such the art is expressed through larger-than-life sculptures, architecture and references various African and Black tropes. Amongst its cultural references Sovereignty highlights rituals from Guinea, African-American culture from South Carolina and gives a nod to the 1931 Paris Colonial Exposition. Leigh’s work also puts forward hybrid art that seeks to connect historical gaps in imaginative ways.

“Sovereignty” as a word complements Leigh’s exploration of self-determination and independence. The artist explains that “to be sovereign is to not be subject to another’s authority, another’s desires, or another’s gaze but rather to be the author of one’s own history.” To this end, Leigh’s sculptures are said to be extractions of the colonial era. They form a narrative and language of the African diaspora. The story they tell is of the colonial era but not of it.

Leigh continues that “you need to invent what might be missing from the archive, to collapse time, to concern yourself with issues of scale, to formally move things around in a way that reveals something more true than fact.” Perhaps this higher truth that ascends historical fact is the layers of interpretation, the subtext that speaks to our unconscious formed from the zeitgeist. The truth that spoke to contemporary people and now to modern audiences. This truth, if it is what Leigh is trying to attain and display, is expressed in her work. 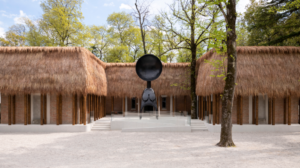 As architecture plays a huge role in Sovereignty, we begin by looking at Façade. In a clever re-imagination of the U.S. Pavilion, in which the exhibition itself is held, Leigh transforms the building into a West African palace. Thatching is installed on the roof’s façade (hence the name of the work); an action that evokes the rich history that it represents. This stirs up the tradition of African architecture and replaces the neoclassical style of the actual building. Leigh is said to take inspiration from the 1931 Paris Colonial Exposition which did a similar feat in order to display the various cultures and countries under French rule. For instance, the exposition recreated the Khmer temple from Angkor Wat, Cambodia. 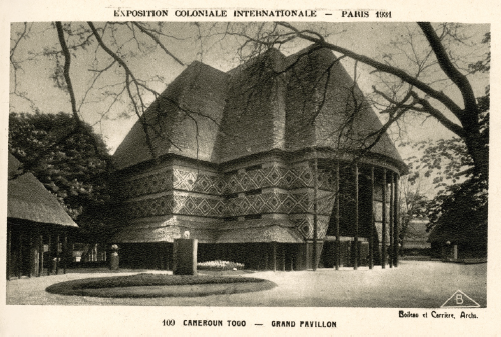 Does Leigh invite the viewer to think about the nature of Colonialisation here? Is there a reversal of narrative? One reading of the work is through satire; a satire of colonial heritage through “crowning” the top of a building which represents Western power, with a traditional African roof. Then through discovering the history behind the Paris Colonial Exposition and the scrutiny it faced, Leigh more heavily leans on imagination to fill in the gaps of history. A reference that was originally intended to showcase the French Empire now becomes a mirror through which we see the arrogance and imbalance of power. It can be read as a critique of empire-building and as advocacy for the marginalised.

Last Garment is a bronze sculpture situated within the Pavilion’s first gallery. It depicts a Black female washing her clothing against the rocks. It is a direct reference to 1879 photograph similarly entitled Mammy’s Last Garment. This photograph was circulated in the form of a postcard and it is said to attribute to the contemporary stereotypes of Jamaica. It promoted the image of the “noble savage” by depicting this laundress in an idealised Jamaican backdrop. The original photograph is both sentimental and patronising as it represents the virtues of an “uncivilised” world. This was another form of control from the White colonisers because by owning the gaze one owns the narrative. It evokes the Male Gaze upon a Black female body, it is a voyeuristic shot, and it strips the agency and narrative away from indigenous people. So, by re-imagining Last Garment (notice the absence of the racial term “mammy”) Leigh reclaims control. As a Black female she exerts agency over the subject matter. Leigh also created the sculpture in clay using a live model in garments from the time. This shows an honouring of the subject and a celebration of the original woman. The sculpture was then cast in bronze which futureproofs the art as well as gives a strong black colouring to the work. Again, the sense of celebration is shown as the sculpture is mounted on a plinth and so is elevated literally and figuratively. This gives a very different impression than the original picture. 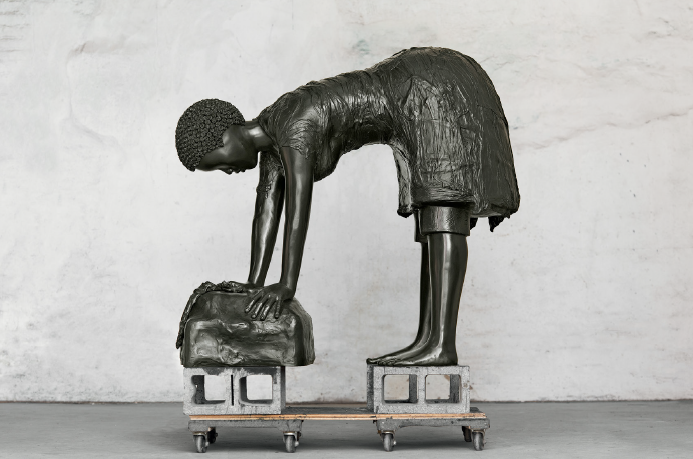 In 1882 James A. Palmer took a photograph entitled The Wilde Woman of Alken. It shows a Black woman at a table alongside a jug with a face. Palmer took thousands of pictures Southern plantation life and the jug is the first known “face jug” which is a type of stoneware produced by enslaved and freed African Americans. These jugs feature in religious or ritualistic practice and sometimes veil hidden meanings. The original photograph is said to be a racist satire of Oscar Wilde’s (hence the same use of spelling) quote that said “anything can be beautiful”. Leigh’s jug sculpture stands at over five foot tall. This stature sets her jug apart from normal vessels. It is as if Leigh is blowing up the proportions to make it larger than life and powerful. The features of the jug are notably Black from the nose, lips and eyes. All aspects are scaled up. In doing so the jug becomes awe-striking and another way to celebrate the subject of Palmer’s photograph. By elevating the jug in size, Leigh elevates the status and beauty of the woman. 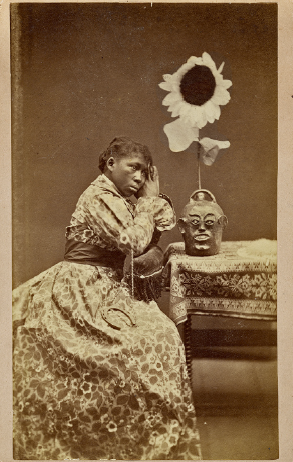 James A. Palmer, The Wilde Woman of Aiken, from the series Aiken and Vicinity, 1882. 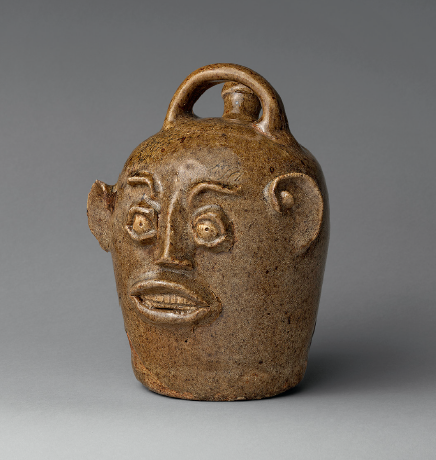 Leigh’s work in Sovereignty includes key features throughout. She often reclaims the titles of work by shifting or changing their names slightly to have a huge impact on their meaning. She challenges ideas of womanhood by reclaiming the image or figures from their original work. This is interesting because it is like time travel; she brings these women to the present day. Again, this is Leigh’s claim that her work fills in the gaps through art and imagination that is truer than historical fact. By working with the energy of this truth in her work rather than historical fact, Leigh reclaims the narrative and space independent from the timeline of colonialisation. In this way she achieves the eponymous state of “sovereignty”.