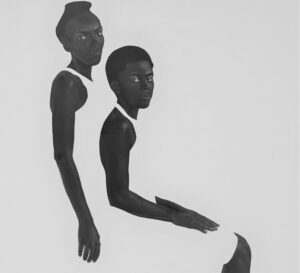 There is a multitude of ways on how to make entry into Mlengeya’s world. We could start with the women in the work, young and beautiful, very reflective of the artist’s locality, Uganda for having one of the youngest populations and East Africa for having some of the most good-looking ladies on the continent.

With her signature “black and white” paintings that have mesmerized audiences on the international art scene, Sungi has managed to put them together for her debut solo show. It’s not really black the color that Sungi uses on the bodies of her posers but a mixture of them that form a dark brownish hue akin to the natural skin tone of, say, a native Sudanese. The Tanzanian’s career graph looks very steep, shooting up sharply against time, an indicator of a natural talent and other background attributes. The gallerist Daudi Karungi through his annual “Surfaces” show for emerging artists back in 2019 spotted Mlengeya and boom, her work was in the Dean Collection in March 2020. Since then, she’s been exponentially rising, gracing the booths of international art fairs and queuing up collectors wanting to own her pieces. Is she worth the hype and meteoric rise to stardom? My bet is a yes. 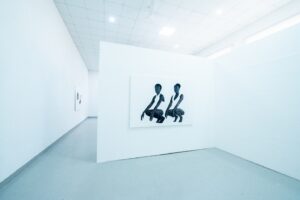 Just Disruptions is Sungi Mlengeya’s first ever one-man show on home turf which opened on 19th June, just a day after Uganda’s despot had just announced a lockdown due to the surging cases of covid-19. Eight paintings are on display leaving a lot of room to empty space in Afriart gallery’s huge area in the Industrial part of the city. At first, I’m not convinced with the extra unused white spaces in the gallery. They look like they need to hold up some of these other beauties. It’s not until I contact Nicole Remus who is the scenographer of the show. It’s the first time I encounter the title and possibly the first time in Uganda a show employs one. Nicole’s work was to create the spatial experience in the room and she comes up with what she called “cells” which are enclosing each of the works. The enclosures get you in a one-on-one situation with Sungi’s work transporting you into an intimate engagement with her ideas. Sungi’s work peers into her process of change which starts with her and then influences the community. When I dig deeper, I find out that Sungi is interested in the trans theoretical model of behavior change as developed by James O. Prochaska and Carlo Di Clemente. You wouldn’t think that her clotheless figures stretch into psychology but here you have it, the lady is that much of a thinker but let’s not go into much of that. Each cell contains a moment within the process of transformation, each picture representing the psychological stages of change, necessary within the movement forward towards equity and empowerment. Mlengeya, in her work seems to offer a guide to the marginalized black woman to rise up, come to par with her counterpart – the man. That journey should be gradual, in phases in-order to achieve good results. She borrows from the metaphor of transformation to reveal the complexity of unpacking the visible and invisible layers that blanket questions of gender equality in East Africa. 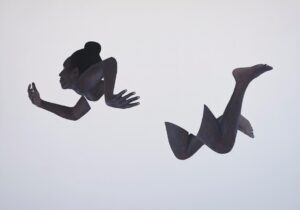 On the surface though, she has improved greatly as a naturalistic painter which is easily seen with the meticulous and smooth application of paint to build the skin tone of her models. The edges of their bodies meet with the white background at sharp well-defined angles and boundaries. Pleasing to the eye too is how her work blends in well with the white box of the gallery adding a heavenly feel to her narrative. The ladies in her paintings are like angels or gods floating away in the sky. The synergy of the space and work is magical, it’s like Daudi Karungi has been preparing the space just for her work. The curator of the show, Sarah Bushra does a good job at providing entry into the body of work through text. However, text is not only limited to the exhibition statement by the curator. We encounter text inform of words and short statements hand-written in charcoal on the wall against the paintings. These are not the titles of the works as I learn later but they are providing entry to the work. And then there is a poem somewhere on the wall in what seems like the artist’s handwriting. Oh yes, I have a knack for putting a handwriting to its hand. So, the poem on the wall was composed by two of the artist’s models Jemima Michael and Ngollo Mlengeya who’s also her sister. The poem echoes Sungi’s paintings and continues to paint a picture about change in words. In it, the authors move through the stages of change framing them around womanhood, from the first verses when things are perceived to be alright and through the realization, questioning, actions taken and their outcomes.
There is a lot of ‘news’ and experimentation in the exhibition display and design which Afriart gallery is known for. The gallery goer expects to have an experience they will talk about when they leave the space and looks like the bigger team working on this show doesn’t disappoint. 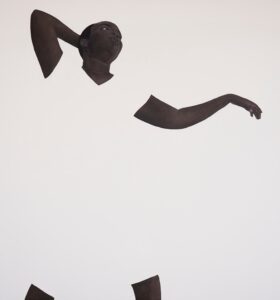 There is a multitude of ways on how to make entry into Mlengeya’s world. We could start with the women in the work, young and beautiful, very reflective of the artist’s locality, Uganda for having one of the youngest populations and East Africa for having some of the most good-looking ladies on the continent. The women, some in motion, floating and taking up space, possibly symbolizing the gradual take over and acceptance of feminism. They wave and parade their young, sensuous, fragile but resilient bodies at the viewer, awakening their hidden prejudices or impartiality. In Preparation and another self-portrait with the artist’s figure taking on self-assured poses, seeming to comment about her arrival in the exclusive art world. She possibly had this in mind when making the work, “Here I am, black, talented, beautiful and a woman, deal with my presence at the table with the white boys”. The artist is taking up space where she wouldn’t normally be, she’s celebrating it and seeing others of her kind broadly doing the same. This is the disruption Sungi is observing taking place, one that she wants to be part of, maybe at the forefront but most definitely help spread. 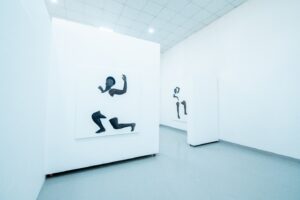 Installation shot of the show at Afriart Gallery, 2021.

‘Painting women into a limitless space’ is a nice metaphor to sum up what Sungi does. With the activist sting to her work, the arresting execution and a wonderful management behind her, the sky is the limit for the fast-rising painter.

Image courtesy: Afriart gallery. The show is on until August 19, 2021

Matt Kayem is a contemporary artist, art-writer and critic working and living in Kampala, Uganda. He can be reached on mattkayem@gmail.com