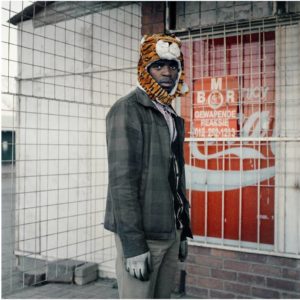 In a space where racism and inequality are still challenges, Sekgala captured the disillusionment of “Mandela’s children” who continue living through poverty and deprivation. Yet despite the challenges of their material world and living situation, we see that “home” goes beyond physical limitations and wealth. The empathic and compassionate images the artist leaves behind in this exhibition are the images he wanted the world to remember as South Africa.

This Autumn, the Hayward Galley was paying homage to the late South African photographer Thabiso Sekgala. The HENI project space was transformed into a vast photoscape for the Here is Elsewhere exhibition, which contains about 50 works by Sekgala and is the artist’s first solo UK exhibition. The title itself draws on the artist’s writings of his own work, and the creation of a microcosm of images that are unique and intimate whilst still lending itself to a general reading outside of that very specific sphere of understanding.

*
That specific sphere is of course South Africa’s Apartheid, and the running theme of the exhibition is Sekgala’s exploration of what home means amidst this backdrop. Is it a physical place? Or is it the feeling of belonging somewhere? Sekgala himself was born in South Africa’s Soweto township and grew up in KwaNdebele. Add to this South Africa’s unique political identity, and the notion of home has historically lent a textured and poignant reading which he captures in the photographs. To document the effects and affects of Apartheid is just the tip of the iceberg for Sekgala. The artist said his work was the “exploration of memory, place and interrelated self-imagining”. The images of the self he examines however are intrinsically linked to the formative experiences within the geography.
Growing up with his grandmother, Sekgala knew about the divide between white and black South Africans. His grandmother had worked for white families and would bring things from those homes that the families no longer wanted. These “leftovers” trained his visual language and allowed Sekgala’s creativity to settle on the nuanced effect of Apartheid. Whilst studying photography in the Market Photo Workshop in Johannesburg and attending photography masterclasses, Sekgala became curious towards a theme that would stick in his work until his death. Here were raised the questions of home; what made a home, what furnishings distinguished the black and white families, and what personal stories could he tell from his pictures?

*
It is this personal point of view which makes Sekgala’s portraits so striking. His sensitivity to such complexities makes the work touching. The underlying sadness that leaves audience so pensive. The solitude that is both peaceful and unsettling. By capturing all of this (told through the eyes of the youth); humour, sadness and fortitude are the ways in which Sekgala creates a deeper understanding of the “born-free generation” who grew up after the democratic elections of 1994. This was the end of the Apartheid and highlights a poetic and tender imagery of black people who made a home outside of the urban areas they once lived, victims of the racial segregation but also survivors of it too. The Here is Elsewhere exhibition collected photographs from his Homeland (2009-2011), Domestic (2012) and Second Transition (2014) series of work.
The Homeland series (2009-2011) captures pictures from the Bophuthatswana and KwaNdebele areas that were inhabited as the result of the forced exodus. 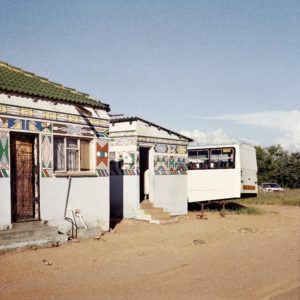 The above picture portrays, in a stark way, the dwellings Sekgala wanted to highlight. Rooted on what appears to be the side of a road, the homes are basic and only decorated on the outside with tribal prints. There are no paths or gardens, only a dirt track. It is far from the luxury houses that are offered to white residents in other parts of South Africa. Devoid of obvious editing, this realistic photography upholds the documentary-style work that Sekgala does well. 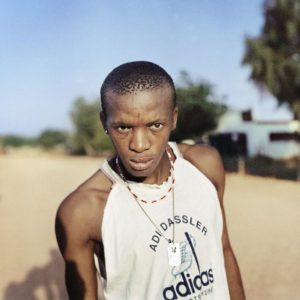 Here is a portrait of a young man, whose intense gaze dominates the frame. Set against a blurred backdrop, the subject pops out and captures the marginalised face of Sekgala’s work. He focuses on the youth, as they were the generation growing up after Apartheid. However the reality of life as a black South African challenges the idealism on paper. There is still a chasm between those who have and those who have not. 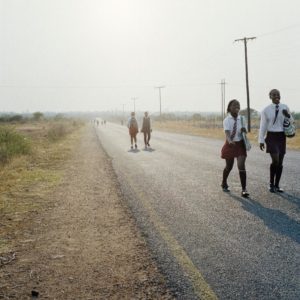 Another of Sekgala’s photographs shows children wearing uniforms on their way to school. There is something relatable about this image to the audience. Something perhaps that resonates with their own childhood; the walk to school, socialising with friends, the freedom of youth. Regardless of the geography, time or place, these are themes that most people can connect to. It is an example of the ability of Sekgala’s pictures to unify memories; not only for those who have lived through South Africa’s history, but also the global audience who have nothing to do with it. 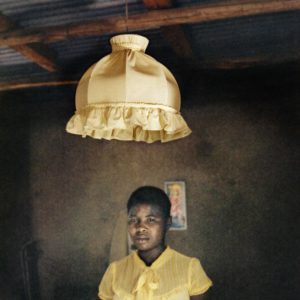 The above is one of Sekgala’s most famous pieces. It is a portrait of Johanna Mthombeni; a teen growing up in the “born free” era. The lightshade echoes the yellow of Johanna’s shirt and the newness of it contrasts with the weathered expression on her face. It seems out of place hanging from the corrugated iron ceiling and wooden beams. You may even wonder if someone brought it back from a white family who no longer wanted it – much like what Sekgala’s grandmother used to do.

Passing away at only 33, the late artist himself was but a young man so it is unsurprising that his photographs capture the buoyancy of youth during the ongoing struggle for equality. “In photography I am inspired by looking at human experience whether lived or imagined. Images capture our history and who we are, our presence and absence. Growing up in both rural and urban South Africa influences my work. The dualities of these both environments inform the stories I am telling through my photographs, by engaging issues around land, peoples’ movement, identity and the notion of home.”

In a space where racism and inequality are still challenges, Sekgala captured the disillusionment of “Mandela’s children” who continue living through poverty and deprivation. Yet despite the challenges of their material world and living situation, we see that “home” goes beyond physical limitations and wealth. The empathic and compassionate images the artist leaves behind in this exhibition are the images he wanted the world to remember as South Africa. The derelict and ramshackle buildings are only the shell; and the shell is a motif repeated throughout his work. Whether a small dwelling or a barren landscape, this is only an exterior perspective. “Home” lies in the relationships built within, the friendships, the pride in small things, a land where one’s ancestors lived, and the hope towards building a better future. 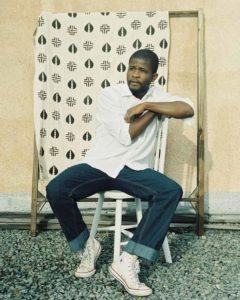 Tragically Thabiso Sekgala took his own life on 15th October 2014, shortly after his grandmother passed away. Although his star burned quickly, it was illustrious and in his legacy Sekgala leaves behind a beautiful celebration of the people and places that were special to him. And perhaps the most poignant answer to his question is that “home” is where the heart is.

Sekgala is survived by his son and daughter.