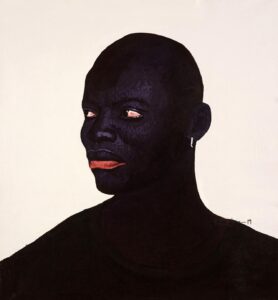 Botchway’s exhibition seeked to unify the mercurial nature of human traditions and politics around what it means to be black. Be it beauty, fashion, identity or skin tone Botchway’s message isn’t just static, it isn’t just a state of being, it is a state of becoming something more.

Christabel Johanson on the work of Kwesi Botchway

Kwesi Botchway: Becoming as well as Being

Ghanaian artist Kwesi Botchway presented his solo exhibition at the Gallery 1957, London. Thematically the exhibition explores identity, colour-consciousness, representation, beauty and their changing natures. Co-curated by Ekow Eshun, the show includes larger work, personal portraits and social media-influenced art.
The exhibition was a documentation of African identity on a micro and macro scale, merging traditional with contemporary and indigenous with the diaspora. Its name Becoming as well as Being is taken from cultural theorist Stuart Hall’s titular essay. Fitting homage to Hall as the challenge of representing black experience is huge. “I think my work highlights evolving subjects which is central to how I view blackness and how I want it to be perceived.” To tackle this Botchway veers from the natural coloring of his subjects. Represented as purple with orange eyes Botchway says he doesn’t want to “just produce realistic work but works that speak loud and can prompt dialogue. My focus is to be more cceptual, focusing on the language of color. I want to elevate Blackness and also what Black truly represents.” 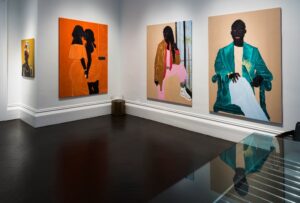 The pieces were created during this year’s lockdown in Botchway’s native Ghana, so reflect the unrest, the political sensitivity, the sense of survival of the moment. Eshun comments that the exhibition features “bold, conceptual works that suggest black identity as fluid not fixed and multiple not singular. They are portraits that capture blackness, in the words of Stuart Hall, as a state of ‘becoming as well as being’.” Botchway’s body of work moves from street art inspired realism to French Impressionism. His approach to re-imagining classical pieces seeks to give a presence of black figures. Historically these subjects were anonymised or demoted, so Botchway celebrates and elevates their station, depicts black and specifically African people living well in everyday situations. 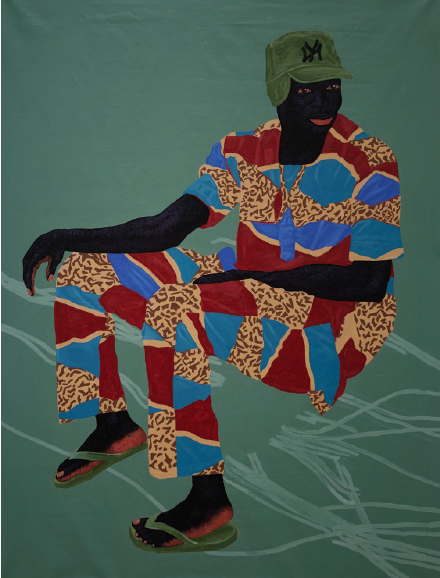 Like the above piece for example, the subject is wearing traditional African print but his features are hyperstylised so that his eyes match his lips and palms or soles of feet. These lighter areas contrast with the darkness of his skin and further with the colors and patterns of his outfit. He is topped and tailed by his flip flops and the green ear flip cap of which the portrait is named. Yet there is an incompleteness to the piece which may be due to the wispy, wind-like lines he appears to sit on. There is a transiency to him, a transformation in process which may denote the “becoming” as well as the “being”. Nonetheless the portrait is peaceful and the man’s serenity assures us that he is comfortable and not frightened.
Botchway explains that his aspirations for the exhibition is to “elevate blackness and to place it at its rightful space – a space of honour and beauty, depicting blackness in its necessary prestige. The works are inspired by everyday black lifestyles as well as a fusion of black identities of modern African and diaspora cultures.”

The gradation of black beauty parallels the gradation of artistic expression. Embodying the mutable nature of this identity was something Botchway knew he wanted to explore, mostly from modern fashion and different ways of expressing self-identity. Of course this influences the art of the exhibition as Botchway tells us about his previous show and its connection to this one, “Dark Purple is Everything Black. That focus on purple is based on its affiliations to royalty, authority and luxury.”

However once art venerates a particular subject there is always a danger that the subject becomes objectified beyond the point of repair. Yet Botchway explains there is a separation between black artists working in this way versus the Western approach. “I don’t think Africans commodify blackness because I don’t feel like we are celebrating blackness to its higher heights because even today, there are still micro-aggressions towards dark skin people. Western styles of beauty and fashion being highly regarded inspired Dark Purple is Everything Black to reframe the perception into black as superior.” 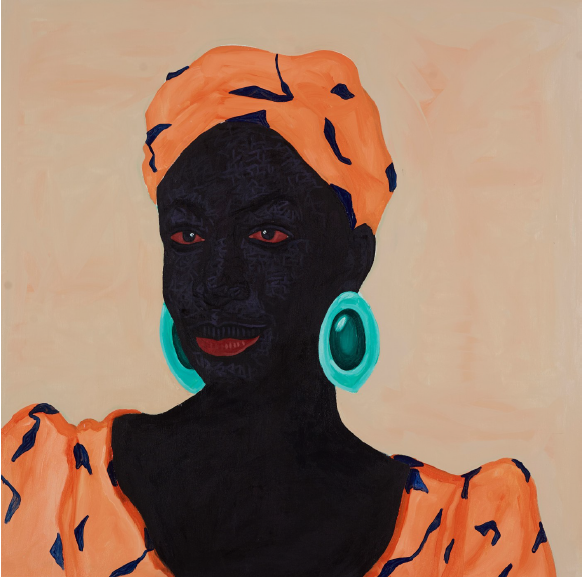 So the exhibition acts as a bulwark against racism which exists on many nuanced levels, particularly in colorism. Blackness not only encompasses race and culture but also the multitude of skin tones. “I think it’s by intimately understanding and pushing the message that the artist is getting across and making sure that the art created goes to the right people rather than just focusing on the fact that the artist is black and there is a potential to gain profit from their work.” Whether this profit is financial or the creation of healthy debate around these topics, the artist’s message should remain at the heart of understanding.

Green Stone Earrings above features a woman in a matching bright orange headdress and clothing with green stone earrings. Again Botchway highlights the fashion of his subjects which is impeccably African, as well as the dark purple skin and orange eyes. Her expression is regal with a hint of a smile on her face. Her headdress is akin to a crown further invoking her royalty. She looks into the distance like the classical poses of the Western art canon. Botchway re-imagines this traditional approach whilst merging it with a Ghanaian flair. 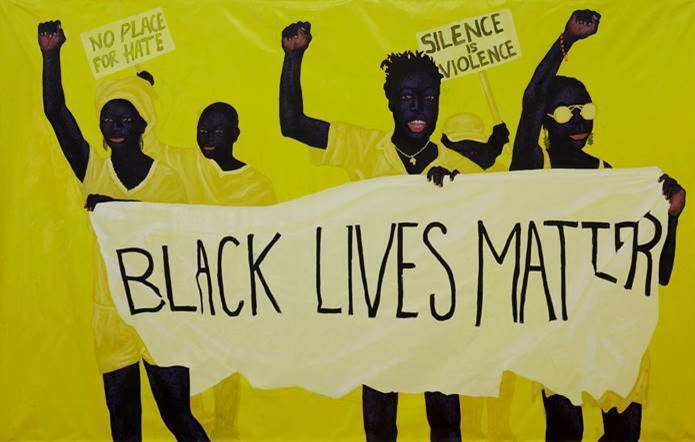 “The piece I was most excited about creating is entitled ‘The Divine Protest’ because the black lives matter subject is very essential. I believe that we are in an era in which we have to make black lives in its fullness our topmost priority.” The protesters appear united holding the “Black Lives Matter” banner amidst other placards with their fists up in the air; a symbol of dissent as well as power. The starkness of the banner is lifted by the yellow that drowns the portrait, and in his typical style Botchway’s dark skinned figures here underline his political statement. This piece contributes to the growing body of protest art amassed over the last decade – but is this is a sign of what the art world is “becoming” or what it is “being”? Right now it is both with artists drawing from their own experiences and the wider global unrest.

Botchway’s exhibition comes during an incredibly difficult year not least of all the racial tensions which flared up across the world. Perhaps though there is something we can all take from the message of “Becoming as well as Being”. Art is itself is an ever-changing medium that becomes the shape of whatever or whoever is putting into it. The same can be said of human mores. Existing from moment to moment in it complete form, art embodies the zeitgeist whilst holding the potential to become something more, expressing that which it synthesises around it. Botchway’s exhibition seeked to unify the mercurial nature of human traditions and politics around what it means to be black. Be it beauty, fashion, identity or skin tone Botchway’s message isn’t just static, it isn’t just a state of being, it is a state of becoming something more.

All the works courtesy Gallery 1957, London