The Role of Sculpture in Caribbean Traditions 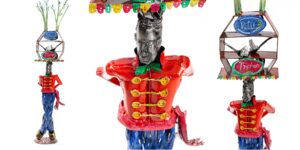 I would describe the Carnival Spirit as aiming for a ‘higher state’ while still on the ground. It may have irreverence and parody but it is a chance to be another kind of person. It is freedom and very spiritual – it illustrates as a chance to be ‘free’, to drink, dance on the street and to be with beautiful people.

The Role of Sculpture in Caribbean Traditions

The Caribbean islands have proven to be a melting pot of artistic talent and traditions. From island to island artistic tropes have constantly evolved and influenced each other. One traditional art form that has featured regularly, especially in carnivals, is that of sculpture.
Sculpture has a long history; for instance the indigenous Arawak people (of South America and the Caribbean) created stone carvings and figurines.

Even older are the works of the Taino people who inhabited the area of the Caribbean Sea. The Taino created visual art to represent their political, religious and mythological narratives. Sculpture played a major role as deities were personified in stone or wooden carvings. These natural materials were important mediums, not only for artistic purposes but because communities believes spirits resided in them. 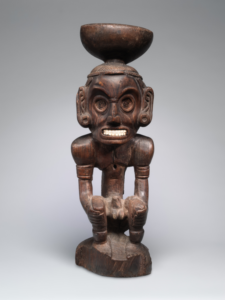 The sculptures often became a centrepiece in rituals and dance, or valuable tokens of trading and symbols of material or political power.
Over the years with the influence of European colonialization, slavery and the multitude of islands within the region, Caribbean sculpture embodied many of this subject matter and more. It also moved further into mainstream thought after the Caribbean Artists Movement (CAM) came to the forefront between the years 1966 to 1972.

Artistic expression developed into the spheres of satire, critical opposition and parody. For instance British artist Hew Locke uses a range of forms to voice themes of race and history. Locke completed an MA in Sculpture from the Royal College of Art in 1994. His work is concerned with colonial and post-colonial power, including public statuary, coats-of-arms and trophies as icons of this power.
In his 2004 piece entitled Black Queen, Locke’s portrait of Queen Elizabeth is set with insects, assault rifles and plastic lizards amongst other objects. It stands over six-foot tall and also includes flora such as leaves and flowers, adding a carnivalesque accent that Locke’s work is known for. Black Queen was originally created as a relief sculpture and is said to signify the fear and anxiety of London at the time (the Capital was at the height of terrorist attacks after the war in Iraq). 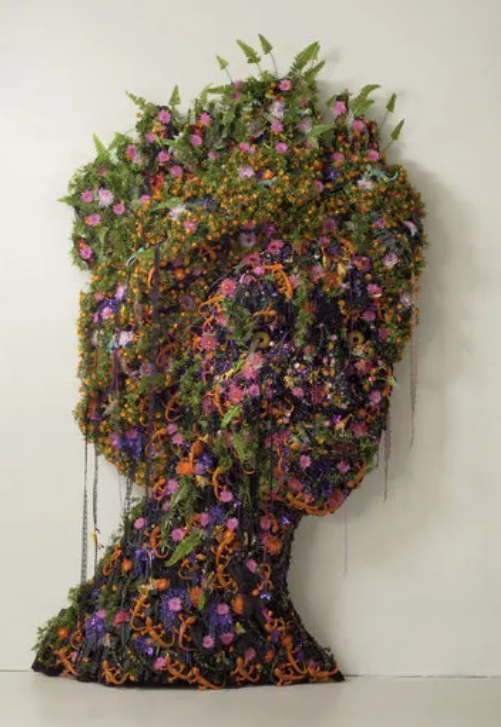 More recently Sokari Douglas Camp CBE has been featured in a solo exhibition of new works exploring the masquerade of Jonkonnu. The exhibit of the same name explores both the African and Caribbean context of this masquerade.
During lockdown, Camp began to research the origins of the Notting Hill Carnival. It was there that she discovered a set of coloured lithographs by Isaac Mendes Belisario, depicting Jonkonnu revellers in Jamaica in the late 1830s.
“The Jonkonnu festival developed during the period of slavery, when plantation workers celebrated the few days holiday allowed each year with exuberant musical masquerades that recalled their African heritage. During these revels, the slaves would disguise themselves in costumes that borrowed from and parodied western archetypes: admirals, sailors, queens, plantation-owners, actors, etc., each with a dramatic headdress, while mingling with these figures were wild men, nature-spirits, demons etc., whose roots lay deeper in ancestral African traditions.”

Interestingly this festival already intersects the traditions of the Taino people, as well as lends to the legacy of colonial iconography picked up by both Camp and Locke. “The outpouring of sculptures that resulted is a heady mix of outlandish characters who trace the overlapping links between still-surviving African masquerades, Caribbean carnival traditions and their most recent incarnation on the streets of London, during the colourfully costumed parades of the Notting Hill Carnival.”

I spoke with Camp to discover more about Jonkannu and the power of sculpture.

What was your inspiration for producing the Jonkonnu Masquerade?

The Pandemic, loss of Carnival, loss of contact with people. I found sketches on the internet by Isaac Mendes Belisario and thought that his figures looked like West African masquerades, the idea of making these prints into sculptural works excited me

The parody of Western archetypes in Jonkonnu festivals feels subversive yet celebratory. How do you understand this and do you try to infuse your work with this emotion?

I enjoy the parody and the imitation of masters; this is something that “artists” in the theatre in festivals and paintings have done in all societies over time. 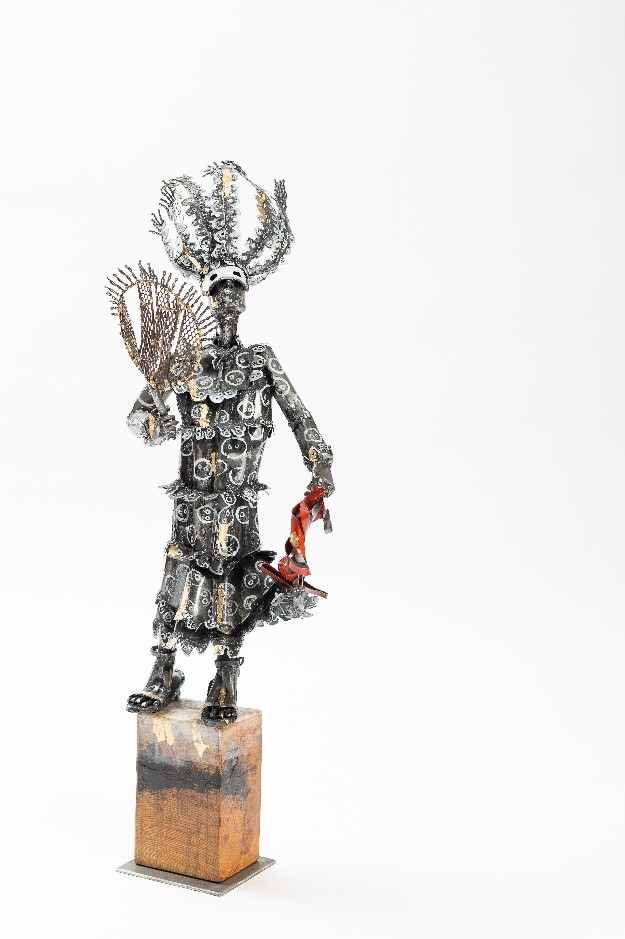 How do you want audiences to feel when they view your work?

I want audiences to laugh, there is humour in the form of John Canoe because of the costume that creates the characters. I would like audiences to look at the layers that make the pieces; the stance/movement, the use of steel that creates the pieces. I feel that I have never been freer with the way that I use steel to describe fabric in these pieces for this show.

There is a connection between the Jonkonnu festivals and African traditions. Would you like to comment further on this connection?

I have heard from scholars that there is a connection to African festivals. I accepted this intuitively without knowing it as fact. The tradition of making yourself into a participant of masquerade has always fascinated me. Headdresses and flowing cloth expressing movement is a familiar sight in masquerade performances in West Africa. I was drawn to this in Belisario’s prints. For slaves in the Caribbean to still have the spirit of masquerade to express themselves is astounding.

How would you describe the “Carnival Spirit”?

I would describe the Carnival Spirit as aiming for a ‘higher state’ while still on the ground. It may have irreverence and parody but it is a chance to be another kind of person. It is freedom and very spiritual – it illustrates as a chance to be ‘free’, to drink, dance on the street and to be with beautiful people. 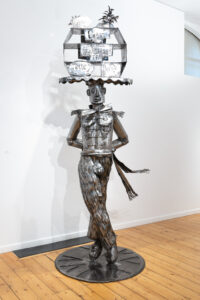 Do you feel other carnivals like Notting Hill or the Mardi Gras keep this spirit alive?

I have never been to Mardi Gras; it is on my bucket list. Notting Hill Carnival has changed in my lifetime from steel bands to large speakers and fewer people parading as carnival troops but I am surprised how the troupe of dancers look like Birds of Paradise now. I have always been interested in the construction of the frames that hold up the heavy feathers that dancers wear. I think that as long as we are allowed to celebrate, the Spirit of Carnival will continue

There is something powerful in representing a tangible form of art like sculpture. How conscious are you of size, scale, texture, colour when bringing your pieces to life?

From small sketches to fully formed sculptures, the characters that come from sketches dictate how large the works should be. The thought of the form is in my mind as I work with steel, then the material has a say on how far I can stretch my designs. I am conscious of texture, this dictates colour sometimes because steel although ‘grey’ when heated has a rainbow colour as it cools along the weld, then this oxidises.
Then I have a choice, will it look best painted or does the process of making need to be seen and viewed in its ‘raw’ state. For example, Yorkshire Tea Jonkonnu needed to be left unpainted and Sugar Cane Jonkonnu needed painting. 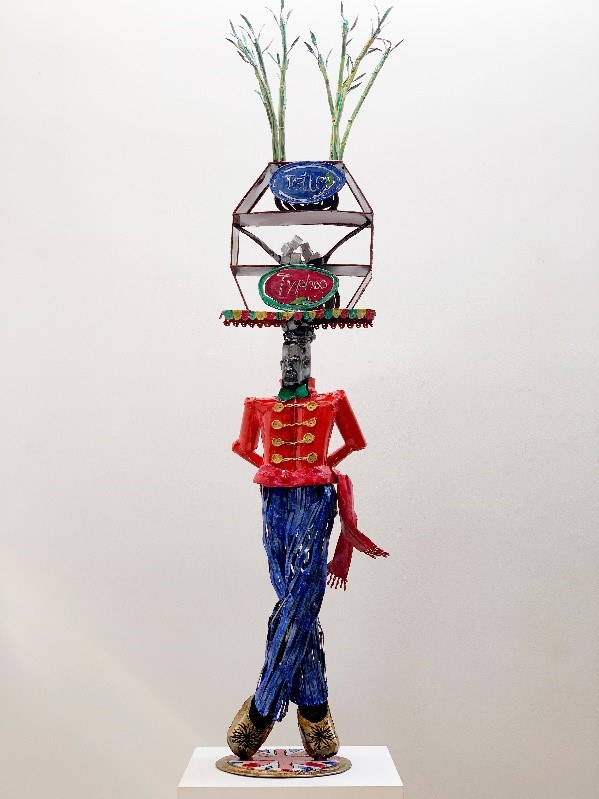 How important do you think it is to preserve this particular thread of history?

It is so important that Caribbean influences should be preserved because all the influences expressed in Carnival; Caribbean, African, European culture are now part of our global history without proper acknowledgement.

Christabel Johanson is an art critic from London