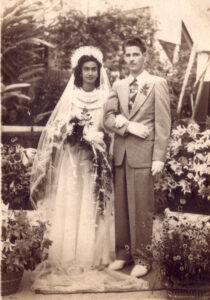 The idea to bring these extraordinary wedding portraits together originated with Lucia Nankoe, guest curator of this FOAM exhibition, in 2014. Together with her team she spoke with descendants of bridal couples with at least one ancestor of Surinamese descent

The exhibition Surinamese Wedding Portraits is a collection of memorable photographs. The portraits come from the period from 1846 to 1954, when Suriname was still a Dutch colony. Together they cover almost a century of Surinamese history. The family photos and stories show the extent to which Surinamese people, under Dutch administration, migrated to all corners of the world. They often found their partner elsewhere, in places like Aruba, Curaçao or Bonaire, in the former Dutch East Indies, the Netherlands or North America. The strength of this collection of personal photos, therefore, lies in the many different connections that stretched all over the world.

The exhibition consists of more than one hundred wedding photos and many family histories. Together they tell the story of countless personal bonds that cross borders, ethnicity or religion. This did not always go down smoothly, yet most lovers followed the path of their hearts and love generally triumphed over the spirit of the times.

The family stories are often connected with important themes that characterize the colonial history of Suriname: slavery, contract labor, immigration and emigration, conflict and struggle. But the stories also talk about personal bonds, diversity and unity. For that reason, the photographs are not only of great significance to the people whose family histories were immortalized, but they also show a shared (inter)national history.

The idea to bring these extraordinary portraits together originated with Lucia Nankoe, guest curator of this exhibition, in 2014. Together with her team she spoke with descendants of bridal couples with at least one ancestor of Surinamese descent. The resulting collection of portraits has continued to grow steadily since the publication of a book and a travelling exhibition in 2019. The project now consists of more than 135 photos and stories. (texts FOAM) 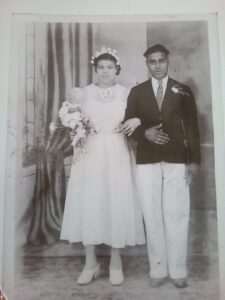 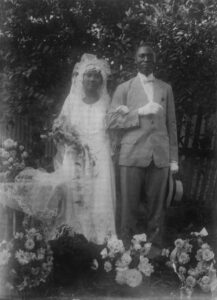 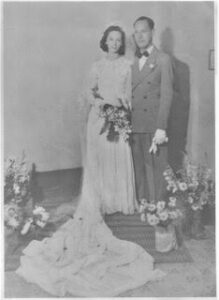 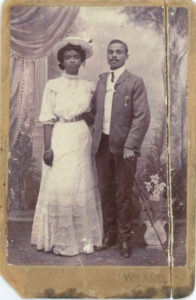 Some quotes out of the talk of Lucia Nankoe, the initiator of the project and the guest-curator.

–Fiction and non-fiction from and about Suriname has already become somewhat more accessible to a large audience, the photographic images enhance the ties to the country’s cultural heritage. The exhibition reflects the unspoken of a hidden history.

–The ambition of this wedding photo project is to provide a legacy for future generations to see a more personal representation of social history.

–We deliberately chose not to confine the collection of photographs to involve only those where both bride and groom were of Surinamese descent. We included couples where one of the pair was foreign born to reflect the influence of other groups on the population. In this way the concepts of marriage or concubinage with a Native becomes more obvious and understandable.

–The selected photos show all ranks and positions in the Surinamese society. Some brides were educated and had a job, but they were often dismissed after the wedding, following the practice of the mother country, the Netherlands. This means on the one hand a waste of capital and on the other hand a clear deprivation of women.

–The power of the photo story intrigues me. What does the wedding couple’s clothes say, or the gigantic amount of flowers under which a single bride and groom are almost buried. Each image undeniably has a deeper meaning, partly due to the ethnic background, the subtle variations of styles that reflect the fashion of the respective years in which the bridal couple was photographed. This information value is subtle and at the same time very precious, because it shows the emphatic influence of Western Europe and the United States of America in a sophisticated way.

–The role of some European missionaries has been more than questionable and sometimes unscrupulous. The traditional marriage of the original population of Suriname was detested by the colonial administration. The practice of concubinage was rejected by both the Roman Catholics (RK) and members of the Moravian Church (EBG). A bamboosie marriage, a marriage that did not adhere to the Dutch matrimonial law as included in the civil code of Suriname and that often took place in the countryside, according to the tradition of certain groups, was rejected

–Much photo material has perished in the tropical climate, or due to the carelessness of photo owners. Wedding poems, hymn lyrics, or diaries are presumably in museums, or in the hands of private individuals, or avid collectors, or dealers, and may be made public one day.

A book has been published to accompany the exhibition. This book includes all photos. With each photo there is a text: ‘the story behind the image’. Go to: https://www.foam.org/nl/over-ons/bookshop or https://www.boekengilde.nl/boekenshop/trouwportretten/ to order/buy the book.

The exhibition in FOAM Amsterdam runs until September 7, 2022
← Charl Landvreugd on Neo Matloga
The Role of Sculpture in Caribbean Traditions →