Under Projects: an empty room for testing out ideas for works and shows 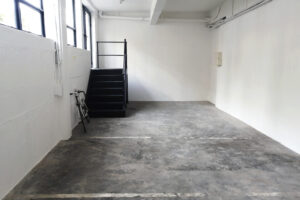 Under Project is primarily an empty room that’s publicly visible. After that, it’s a lot of programming, and curating, and emailing, and installing, and printing flyers on our end.
But that first point –an empty room for testing out ideas for works and shows– is really important, especially as it becomes increasingly rare in Cape Town.

Misha Krynauw talks with Mitchell Messina about Under Projects.

Under Projects: After renovation, prior to opening

If you had to consider the terms and conditions of the commercial arts sector that are at play, how much would you say it costs to be independent right now? By that I mean, what is the toll for going beyond the lucrative lines institutions have drawn around themselves, their interests sewn to their sense of success, while suffocating the creative community that the city is begging to be?
Alongside the monopolisation of the industry runs the legacy of independent artists who came together despite; to spite; to challenge, or to liberate themselves from the orbit of the obligation that comes with participation or representation. These groups dedicated themselves to creating the channels they are denied, as freely as they could, for as long as they could.
Aligned with the aspirations of their predecessors, there are collectives surfacing in the city who are as determined to navigate toward their creative freedom. Grouping resources, time and efforts into creating room to build a more considerate model for expression, exhibition and providing the ultimate opportunity, and every artist’s dream: the chance to try.
Speaking with Mitchell Messina, we unpacked ‘Under Projects’ a versatile viewing room on 79 Roeland Street, the idea that brought together also the minds of Luca Evans, Guy Simpson and Brett Seiler.

What brought everyone together?

Back in February 2022, Brett (Seiler) had split rent on a space with Galerie EIGEN+ART, who were down for the Cape Town Art Fair. After an initial pop-up show by EIGEN+ART, the space was available for the rest of the month. So, each week some artists would host a group show and then pass on the keys to the next group. We knocked out three shows in three weeks, before losing the lease to a Vape Shop.

We kept in touch about trying out a similar model again in the future, but it was all loose talk until Brett found our current space, signed the lease the same day, and we all rushed in to build infrastructure around it.

When did the Under Projects officially begin?

Perhaps a good official point to begin from was our first opening on 8 September 2022. We had a fundraising event in the space to recoup the renovation costs. The space remained empty except for a wooden board on which we wrote the names of anyone who donated any amount toward the space. It’s called the Under Project Patron board and we continue to add names to it as donations come in.
We realised quite early on that we’d have to rely on the broader arts community to help cover costs and keep a non-commercial model. It helped to begin Under Projects by making it clear that the space is reliant on support from a community that is occasionally willing to float it financially, or contribute works for exhibitions, or volunteer skillsets and services for events. 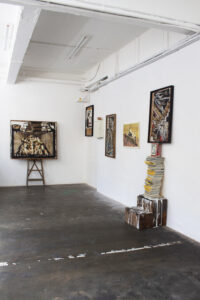 How would you describe the project?

Under Projects is primarily an empty room that’s publicly visible. After that, it’s a lot of programming, and curating, and emailing, and installing, and printing flyers on our end.
But that first point –an empty room for testing out ideas for works and shows– is really important, especially as it becomes increasingly rare in Cape Town. Mostly because anyone who wants to organise a show in the city needs a baffling amount of capital to accomplish all the accompanying tasks (ranging from signing a short-term lease, to accounting for the security of work, to advertising the show) before the show-making actually begins. And those obstacles (justifiably, and unfortunately) incentivise artists to think entrepreneurially instead of experimentally around what a show can be and how it can function. Our model provides room for practitioners who do not have the necessary capital for other spaces, or whose practices do not fit in more commercial spaces, or who just want to try something different.

What are the hopes and aims of the group members/project?

The main aim would be to develop an acumen around show making, and learn how to continually use the space in new and exciting ways. That includes learning how to organise and galvanise the broader arts community around shows, so they can engage and participate in the process.
Ultimately it’s a process of seeing how much you can do with very little, and for how long. Understanding that projects of this nature have a tendency to bloat, or sag, or burn themselves out entirely. 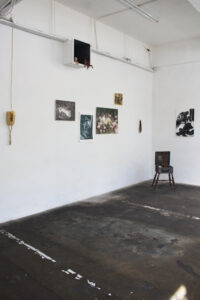 How did it get its name?

Deciding a name had its fair share of agreement, disagreement, fracturing, alliances, compromises, vetoes, canvassing, and finally ranked-choice voting.
Simply put: The space is a basement-level renovated parking garage. So, it’s under everything.
Romantically put: We were thinking about notions of the Underground, underdogs, the Situationist International’s Under the pavement, the beach, and Moten & Harney’s The Undercommons. Something hard to discern or easily overlooked, that exists below the surface.

How does it work?

It’s different every time, but mostly we (the four co-founders, Brett Seiler, Luca Evans, Guy Simpson, and Mitchell Gilbert Messina) discuss upcoming programming, take turns to organise and do chores, suggest artists we want to work with, or shows we want to initiate in the space – and then we just sort of go for it. There’s a lot of scrappiness and levity to the process, mostly because it’s all voluntary work and we all have other jobs.
For December we’ve opened the space up to proposals, which we’re hoping will provide some new insights into how the space can be used, and get others to organise their irreverent ideas for shows without all the aforementioned obstacles. 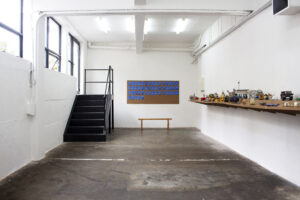 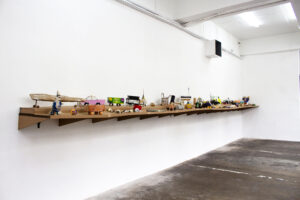 Why are you/the project based where you are?

It was a good size and location, and we could afford the rent for a couple of months. We found it by chance and it worked.

What are the necessary contributions of the collaborators and participators and donors (and yourself) that make each exhibition an ‘Under Project’ exhibition?

There’s some push and pull here, mostly it’s about giving practitioners the space to test out ideas. But sometimes it’s also about encouraging them (and ourselves) to step outside of a comfort zone, or ignore any preconceived ideas about how an art space should function. The main aim with Under Projects is to not impose too much of our own sensibilities onto the exhibitions and events we host and facilitate, and to rather be responsive to, and engaged with, the ways in which others want to use the space.
We tend to reach out to practitioners we think might use the space in interesting ways. And we have a lot of practitioners reaching out to us. Ideally the space allows for a more informal way of working (in contrast to a commercial gallery or museum show), that remains open to the public (in contrast to a studio practice). 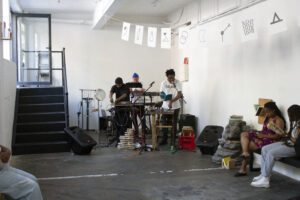 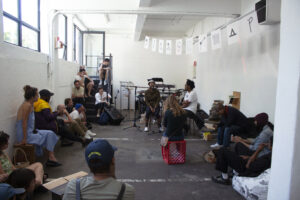 Describe the approach to exhibitions and exhibiting.

Describe the project’s connection to (or challenges with) the space’s environmental surroundings (whether physical, social, etc)

Our placement in the city is largely due to luck and happenstance.

How does this project meet the expressive needs of its members?

We’re all practising artists, so it gives us a space to think about the relationship between making things and showing things. What can an exhibition, or event, or exercise do when it exists outside the studio, but not in the gallery?
There’s something about an intermediary space that allows you to take an irreverent idea and organise people and work around it. And in that act of organising you end up having discussions and conversations with everyone who’s popping in or passing by. Organising tends to be a lot less insular and focused than a single artists’ practice, it’s many hands collectively moving the planchette to an unknown place on the ouija board. 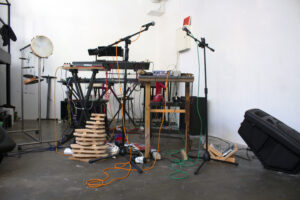 How does this project stand alongside the tasks of a working artist?

They’re not dissimilar – the same problems arise that need to be solved:
Is this straight? Will this hold? Does it smell like paint in here? Who’s going to sweep the floor? Who’s going to take the garbage out? Who’s going to fix the leak? How’s the website coming along? Has anyone responded to the email? Is it contrived to make a post about this? Did you keep the receipts? Will we be ready in time? Do you think anyone will come?

How does the project intend to maintain itself and its integrity in the midst of the city’s disproportionate financial swinging in the arts?

It’s tough. Many of the available funding streams create a reliance on external organisations and the imposition of their value systems around what art and artists should do. Even the act of applying for funding encourages a professionalisation of the arts, the turning of shows into showroom floors, and the translation of community engagement into impact reports. They’re not inherently bad systems, they’re just off-kilter and designed for businesses – funding requires a clarity and definition that tends to flatten out, overly define, and neutralise the nicest part about the arts (that things can be vague, open to interpretation, and hard to measure).

For the time being we’re sticking to a scrappy DIY approach to shows, sharing the work and working voluntarily in between our own personal jobs, and relying on crowdfunding and patrons to cover operational and rental costs. We’ve deliberately avoided sales and/or subletting the space to others for the time being, as both those strategies have a tendency to create value and managerial systems that entrench themselves pretty quickly.
Maybe this points to a stubborn integrity that’s essential to how Under Projects currently exists. But it’s also understood that that integrity is easy to maintain only so long as you can afford it. We’re aware that these sorts of projects will always have to renegotiate shifting alignments to the broader art ecosystem, and as a result they can have very short lives.

Under Projects have just announced Christian Nerf, Max Law and Bulumko Mbete as their selected artists for a proposal call they sent out last month for people looking for a place for their “project; screening; group-show; performance; workshop; lecture; recital; residency; experiment”, offering a week in the space, installation assistance and design material assistance. While they are understandably unable to offer funding, the opportunity they’ve presented creates a much-needed conduit for the creative energy teeming in Cape Town, and animates the prototype Under Projects is ever-developing to honour that there is merit to the creative mettle that demands an artist’s independence.